Even in modern science, computers with the same level of computing power as the human brain have not been realized, and it is said that this is because there is no single device that can reproduce the movement of

neurons in the human brain. Was there. However, a device that can realize the computing power of neurons using memristors has been announced by a research team at the Hewlett-Packard (HP) Labs.

A research team led by Suhas Kumar and colleagues at HP Labs has unveiled a device of approximately 100 nanometers capable of outputting electrical signals that resemble the action potentials of neurons. The following image is an enlarged view of a device that combines a resistor, a capacitor, and a mott memory star, which was developed by the research team. 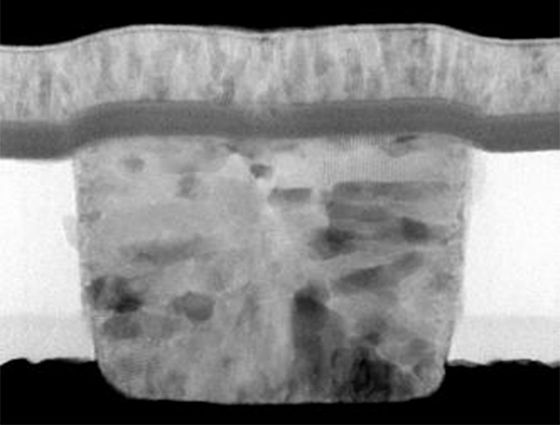 And the following image is an image diagram showing the structure of the device. The device is composed of platinum (Pt), titanium nitride (TiN), 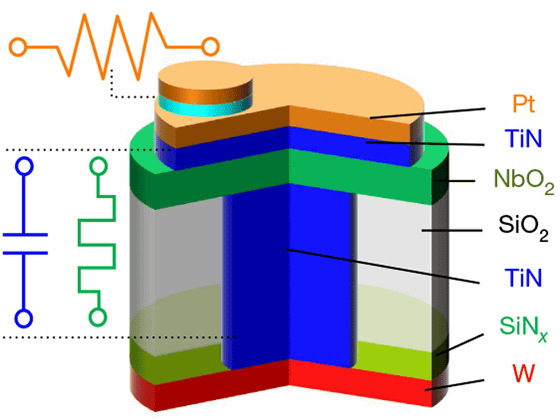 R. Stanley Williams of Texas A & M University, one of the research teams, said it took about five years to realize the device. According to Williams, the structure of the device that was successfully tested came through tenacious fine-tuning of the type and amount of material, the temperature applied to the device, the current, etc., and was not something that could be discovered by chance. “Everything needs to be perfect, but once it's made, it's also a very robust and reproducible combination,” says Williams. In addition, it seems that it is difficult to put the device to practical use because niobium pentoxide causes the Mott transition at a considerably high temperature of about 800 degrees. To make the device practical, Kumar and Williams are planning to explore other materials that can cause Mott transitions at different temperatures.