A method to identify counterfeit whiskey in a bottle is developed 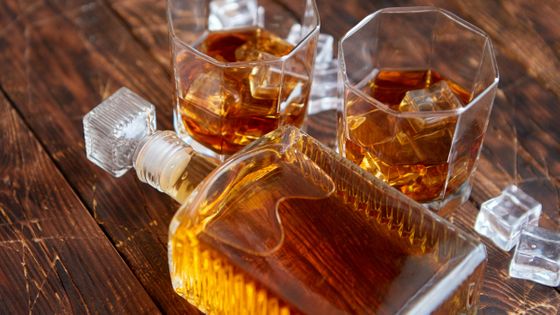 Scotch whiskey is loved by many people all over the world, but in recent years, with the increasing demand for vintage Scotch whiskey, many scotch whiskeys with forged years have been on the market. A research team at the University of St Andrews in Scotland has developed a way to tell if a whiskey is counterfeit or not in a bottle. In recent years, rare vintage whiskey counterfeiting has become widespread, and in a 2020 study that focused on the

radioactive isotope carbon-14 contained in whiskey and conducted radiocarbon dating , among the bottles surveyed It turns out that more than half are not as old as they are on the label. According to the results, the bottle, which was supposed to be manufactured in 1863, may actually have been distilled between 2007 and 2014. Under these circumstances , David Robertson, co-founder of Rare Whiskey 101 , which conducts research and appraisal of vintage whiskey, said, 'Bottles that are said to be before 1900 prove to be genuine. It is our true belief to presume that it is 'fake'. ' So scientists are studying methods to chemically analyze whiskey in order to deal with the problem of counterfeit whiskey.

Made from water and barley, or other grains, whiskey is a chemically complex liquid that contains thousands of compounds that make up a unique color, aroma, and flavor. Since the chemical characteristics of each whiskey differ depending on how it is manufactured and how matured it is, it is expected that by investigating the chemical substances of whiskey, it will be possible to detect counterfeit whiskey.

In 2019, a research team at the University of Glasgow in Scotland developed a sensor called the 'artificial tongue,' which is a grid of 2 million pieces of fine gold and aluminum with a side of only 100 nm. ..

When a sample such as whiskey is hung on the sensor and exposed to light, the metal pieces and the chemical substances applied to the surface of the metal pieces reflect light of slightly different wavelengths depending on the type of molecule in the sample. .. By analyzing the wavelength of this light and collating it with the database, it is possible to determine what kind of liquid the sample is. In an experiment conducted by the research team, three brands of whiskey from the same distillery but different ages and tars used for aging ' Glenfiddich 12 years ' ' Glenfiddich 15 years ' ' Glenfiddich 18 years ' It is reported that all of them could be distinguished.

'Artificial tongue' that can see through counterfeit whiskey with 99.7% accuracy is developed --GIGAZINE 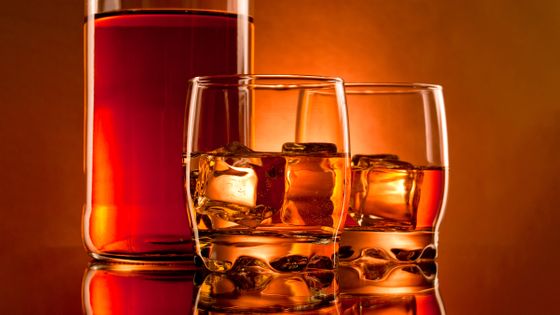 However, if you need to take the whiskey out of the bottle to determine if it is genuine, you cannot identify the whiskey before you buy it. So a research team at the University of St Andrews researched how to identify whiskey in a bottle.

Spectroscopy, which irradiates a substance with laser light and analyzes the components contained in the object from the spectrum of light transmitted, reflected, and absorbed, can investigate the chemical components without directly touching the object. However, since the glass itself used for the bottle generates a spectrum, there was a problem that it was difficult to investigate the liquid inside by spectroscopy.

To solve this problem, the research team devised a method of 'using a conical lens to irradiate the bottle with a circular laser beam to concentrate the light inside the bottle.' As shown in Fig. A below, this is a mechanism in which the laser beam that forms a ring through the conical lens shrinks when it passes through the lens (L2) and converges after a few centimeters. Looking at Figure B, you can see that the ring of light shrinks as it moves away from the lens and eventually gathers at one point. 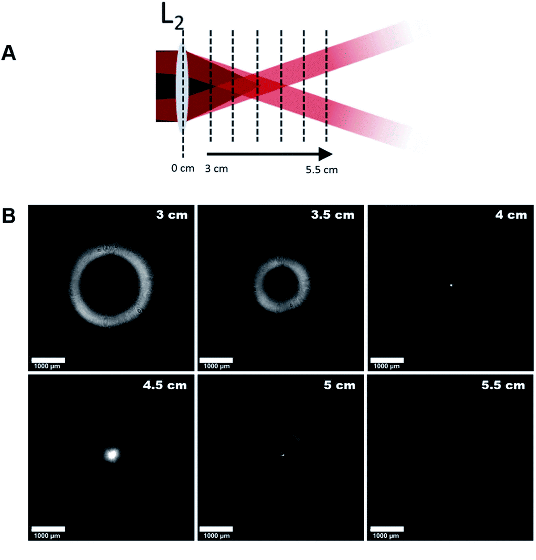 Figure A below shows the laser beam hitting a bottle of whiskey in a more understandable way. The laser light at the time of hitting the surface of the bottle is circular, but by collecting the light inside the bottle, it is possible to avoid the influence of the spectrum generated by the glass itself.

By using this method, it is possible to investigate the internal chemical composition without opening the whiskey bottle, and it is expected as a new method for testing the reliability of whiskey.