An experiment is conducted to relieve stress by giving 'cannabis extract' to an elephant whose companion is dead and sad. There is an image that cannabis is bad for your health, but in some countries it has been legalized as a favorite item, and in recent years there has been a growing movement to lift the ban on the use of medical cannabis. At the Warsaw Zoo in Poland, an experiment will be conducted to 'relieve stress by giving ingredients extracted from cannabis to elephants who are dying and sad.'

Can CBD soothe mourning elephants? A Polish zoo is about to find out | Live Science
https://www.livescience.com/stressed-elephants-cbd-cannabis.html 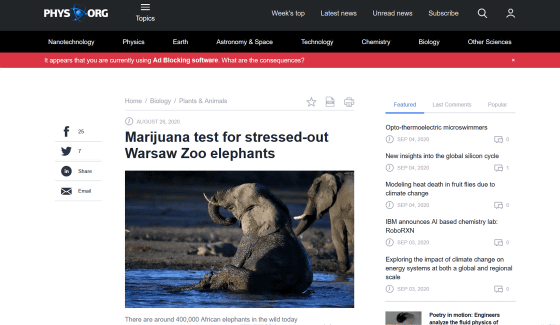 Four elephants were bred at the Warsaw Zoo, but in March 2020, an elephant named Erna, who was the boss in the elephant herd, died, and the elephant herd became three. .. The death of the oldest Erna seems to have been a shocking event for the young elephants in the herd, and the three elephants have shown signs of stress since Erna died.

Therefore, Warsaw Zoo has decided to carry out a project to relieve stress by administering

cannabidiol (CBD) , which is an extract component of cannabis, to elephants. CBD stimulates the production of neurotransmitters such as serotonin and dopamine, and is said to have medicinal effects such as anti-inflammatory, anxiolytic, and analgesic effects, and is distributed for medical purposes and as an ingredient in health foods. I will.

'This project is probably the first of its kind to tackle elephants,' said Agnieszka Czujkowska, the veterinarian responsible for the project. Medical cannabis has already been given to dogs and horses, but CBD has never been given to elephants. According to zoo officials, elephants are stress-prone, but easy for zookeepers to keep an eye on, making them suitable for testing with drugs like CBD. CBD is attracting attention as a naturally occurring medicinal ingredient and is said to be useful for the treatment of anxiety, depression and cancer. Speaking of cannabis, psychotropic effects and dependence are attracting attention, but the psychotropic effect of cannabis is the action of a substance called tetrahydrocannabinol (THC) , and CBD has no side effects such as psychotropic effects, so it is related to drug regulation. There are no international regulations. It is also exempt from regulation in Japan, and CBD extracted from hemp stalks and seeds is distributed.

In this project, high-concentration CBD oil will be mixed with food for three elephants. Czujkowska believes that CBD will not cause euphoria or harmful side effects on internal organs, 'this is an attempt to find alternatives to existing methods such as drugs to combat stress.' It was.

At the Warsaw Zoo, the level of cortisol , a hormone secreted by stress from elephant saliva and blood samples, will be measured, and after administration of CBD, the level of cortisol will be measured again to confirm the effect of CBD. CBD is said to be given continuously at a pace of 2-3 times a day, and Czujkowska commented that it would take about two years of research for the research team to produce final results. 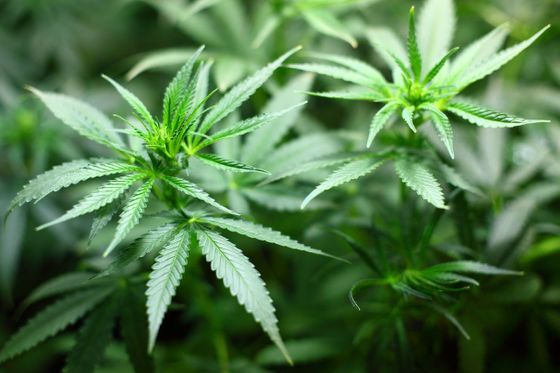