U.S. is considering adding SMIC, a major semiconductor manufacturer, to the 'sanctions list' Reuters reports that the Trump administration is considering trading restrictions with SMIC, a major Chinese semiconductor manufacturing giant, and an American company. According to sources, the Pentagon is investigating the relationship between SMIC and the Chinese military, but SMIC denied the relationship in response to the news and announced that 'I want to misunderstand.'

Semiconductor Manufacturing International Corporation Responses to Media on the US Government's Consideration to Add the Company to a Trade Blacklist
https://www.prnewswire.com/news-releases/semiconductor-manufacturing-international-corporation-responses-to-media-on-the-us-governments-consideration-to-add-the-company-to-a- trade-blacklist-301124794.html 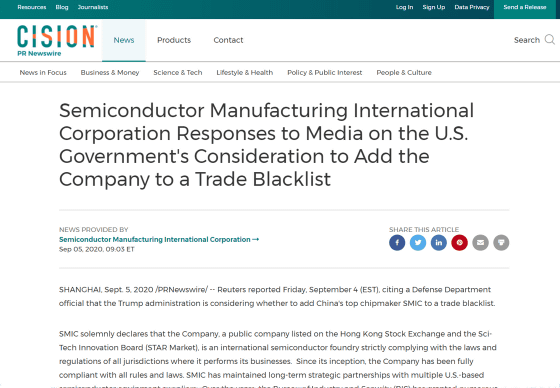 During the first week of September 2020, the US Department of Defense proposed adding an SMIC to the Entity List at an end-user committee held by the Department of Commerce. The entity list contains companies and organizations outside the United States that have been determined by the U.S. government to be unfavorable for doing trade, including Huawei , ZTE , and Apple's supplier O-Film. The base 275 companies are already registered. When American companies export technology to these companies, multiple complex screenings are required.

The Pentagon has not revealed why it is considering entering SMIC's list of entities, but said it is investigating the relationship between SMIC and the Chinese military.

Meanwhile, SMIC has received a report from Reuters, saying, 'I'm shocked and confused.' He denies SMIC's relationship with the Chinese military, saying, 'SMIC wants to openly and transparently communicate with the US government to resolve misunderstandings.'