A movie that summarizes 1.4 million reproduced '4K photos of Mars' NASA has sent probes such as

Opportunity and Curiosity to Mars, and they have regularly sent 'photos of Mars' to Earth. A movie that summarizes the super high-quality images created by NASA by joining such Mars photos is released.


The image of Gale Crater taken by Curiosity, which has been exploring Mars since 2012, is shown below. The Gale Crater has a diameter of 154 km and is believed to have formed between 3.8 and 3.5 billion years ago. The name 'Gale' is given by the amateur astronomer Walter Frederick Gale who observed Mars in the 19th century. Rock Nest inside the Gael Crater looks like this. The mountain in the front is Mt.

Aiolis at an altitude of 5500m in the center of the Gael crater. An image of the Cape Verde , a cape on the edge of Victoria Crater in the Meridian Plain, was photographed on a wavy ground. Cape Verde and the place name Cabo Frio, which is adjacent to Cape Verde, derives from the place name of the Earth discovered by Ferdinand Magellan, who is known as the discoverer of the Strait of Magellan , during his voyage around the world. Santa Maria No. derived from, Santa Maria crater , and the image was colored in blue. For the sake of clarity the material difference, such as rocks and soil, such coloring is has been decorated . Below are images of the

Marathon Valley surveyed by Opportunity over a year and two months from July 2015 to September 2016. The barren ground extends all the way to the horizon. John Klein , looks like this. Since John Klein contained iron and sulfur, NASA concludes that there was a substrate on which the microorganisms were born. The name John Klein is said to be the name of the deputy chief investigator of the mission who died in 2011. Below is an image of the Glen Torridon area, named after the same name in Scotland. You can see that the curiosity is reflected in it and it looks like a little selfie. An image of the journey to reach the sulfate-rich region. Curiosity rushed up this path in 2020 to explore rock mass. A view of the A selfie of Curiosity in the Namib Desert on Mars. The name comes from the Barnes Cliffs located in Endurance Crater. It was taken by the opportunity. 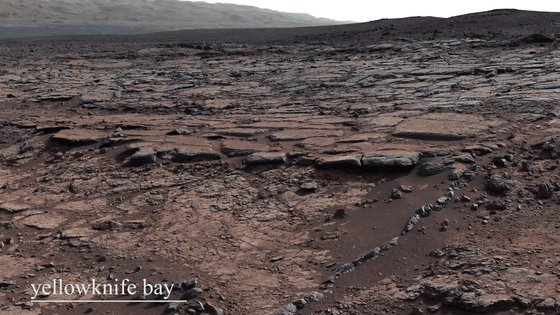 Photo of Namib Desert, Part 2. A large dune is visible in the front. Curiosity was also reflaming in. Vera Rubin's uplift that Curio City has been exploring for over a year is like this. It is a place name derived from American astronomer Vera Rubin who showed the existence of dark matter from the observation result of the rotation speed of the Andromeda galaxy. According to Elder Fox Documentaries , a scientific YouTube channel that summarizes these photos, Curiosity has a high-performance camera, but with the exception of 8 minutes per day, the communication speed with the earth is 32 kilobits per second ( It's about 4 kilobytes ), so it's impossible to broadcast live on Mars. ElderFox Documentaries commented, 'It makes more sense to send images, because on Mars almost nothing moves.'