With the progress of digitalization, a new polymer has been developed that can easily extract precious metals such as gold from

electronic waste, which is increasing in the world.

The slow progress in recycling e-waste is due to the inefficient recycling process itself. Under such circumstances, a research team led by Mr. Yeongran Hong of the Korea Institute of Science and Technology has developed a new porous polymer 'COP-180' that can easily extract precious metals such as gold from electronic waste. COP-180 is made from an organic compound called porphyrin . The research team used the property of porphyrin to form a complex with a metal atom, and formed a large number of very small holes in COP-180 to adsorb the metal atom.

The research team is also conducting an experiment to collect precious metals such as gold with COP-180. First, put the circuit board in an acidic solvent and mix for several days to peel off the metal atoms you want to take out. When COP-180 is put into this solution, the porphyrin micropores in COP-180 adsorb metal atoms and precipitate as a mass. When acid is applied to this mass, COP-180 and metal atoms are separated, so only metal atoms can be taken out. In the experiment, platinum and gold were particularly efficient at collecting, and 94% of the gold contained in the circuit board could be recovered. 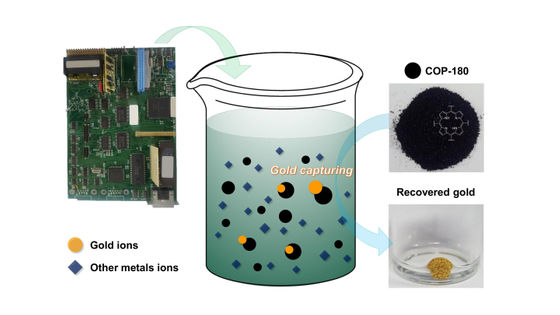 In addition, in the experiment, it was confirmed that about 1.62 grams of gold can be adsorbed per 1 gram of COP-180. Converting these results, COP-180 worth 5 dollars (about 500 yen) can collect gold equivalent to 64 dollars (about 6900 yen). In addition, COP-180 can be reused even after taking out metal atoms with acid, so the research team explains that 'the cost of a series of recovery work is considerably cheap'. 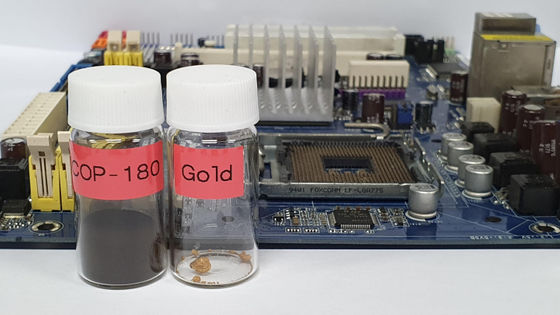 The research team pointed out that the printed circuit board contains more precious metals than the ore of the mine, but 80% is sent to the landfill as it is because there is no recovery method. He said that streamlining the processing of e-waste can help prevent economic opportunities.