Technology to automatically generate 'human-specific handwritten characters' is under development 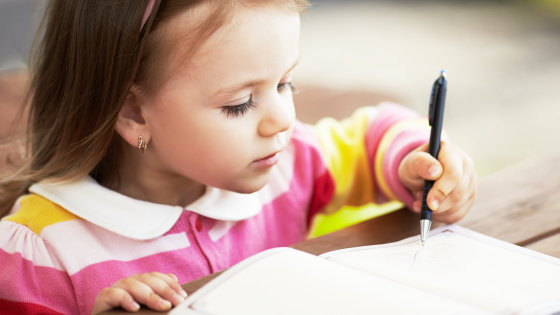 Many people think that 'handwriting is peculiar to the person and cannot be managed by machines.' However, the

Pattern Recognition Lab, which analyzes utterances and image patterns, has newly published a paper on a technology that automatically creates handwritten text by patterning the human writing process.

This technology was developed by a research team of Martin Mayr and others who research computer vision and deep learning. You can see how the handwritten characters are actually generated automatically from the GIF animation (about 1.8 MB) clicked below.

The system under development by the research team is as follows. The handwritten word written in the upper left frame is first 'skeletonized' (upper center), and then simplified by 'online sequence' (upper right). Then, the style of this writer is applied to the previously input character string (lower right), after the skeleton is rendered (lower center), handwritten characters are output as an image (lower left). .. This method allows you to input a single word written by someone and output a character unique to the writer using another character.

The machine learning algorithm 'CycleGAN' was used to prevent the characters from collapsing when the conversion was performed. Also, because it was not possible to perform resampling at a constant speed during training, it seems that 'maximum acceleration sampling' was performed to sample the points on the line sparsely.

According to the research team, when performing a Turing test to determine whether the characters generated by the system are human, the percentage of subjects who were able to identify 'handwritten characters' output by the above method as fake was 50.3% I heard that. At that time, 67.7% of the respondents judged that real handwritten characters were handwritten. However, the rate at which the writer identification system identified fake handwritten characters as 'belonging to the impersonator' is 25%, and the overall level is 'not understood by the general public, but not by a specialized system'. It seems to be.

The above technology is in the development stage at the time of writing the article, and there are problems such as 'eliminating punctuation marks' and 'inheriting the bad habits of writers'. Researchers also say that forensic experts may find that it's a different handwriting.

On the other hand, if this technology is completed, people with physical problems will be able to write sentences with their own handwritten characters, and even in the case where the work of 'scanning and capturing handwritten messages' was necessary until now. , It will be possible to save the trouble. In addition, it is possible to handle your own handwritten characters in the virtual reality world including games, to help generate samples for character recognition engines that require many training samples, and to develop more powerful identification methods in forensic research. Sex is considered.