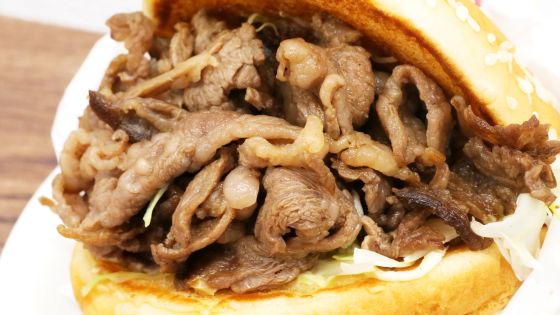 Although it was planned to appear only at Nico Nico Chokaigi, the event was

canceled and the Dom Dom Burger's ' Super Prime! Phantom! Japanese Black Beef Burger ' is June 1, 2020 (Monday) Has appeared for a limited time since. Dom Dom Burger Under the mission of 'I can't let this taste end in an illusion!', I immediately tried to see what kind of taste the Japanese black beef burger was decided to sell. At the store, there was a poster of 'Super Healing! Phantom! Japanese Black Beef Burger' with beef sandwiched in between. I was able to take out the Japanese black beef burger, so I brought it home. 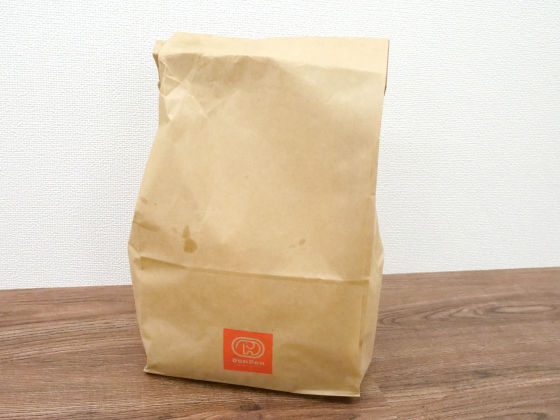 There is a sticker on the wrapping paper that says 'Kuroge Wagyu'. When you put it on a plate, it was so full of beef that it would spill. However, when I lifted the buns and checked the contents, it consisted of half beef and the other half cabbage. The white sauce is mayonnaise. This is about the size of a transportation IC card. It is possible that the buns may have squeezed a little while you brought it back, but it is a rather small size. When you eat it, you can feel the savory soy sauce flavor from tender beef. Perhaps because of its soy sauce-based flavor, it's a dish that makes you want rice even if you're eating a burger. It is not greasy, and the meat tastes so strong that it makes vans and cabbage dull. However, the taste of mayonnaise is strong, so if you eat it with mayonnaise, it will change to the mayonnaise taste. Half of the burger is meat, and the other half is cabbage, so be careful because you may end up with only buns and cabbage if you eat it incorrectly. You can buy 'Super Healing! Phantom! Black Wagyu Beef Burger' at Dom Dom Burger nationwide except Raffle Introductory Shop, and the price is 990 yen including tax.