Research results that negative emotions occur when working with multitasking 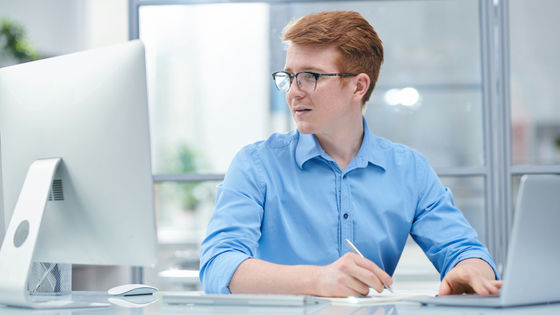 Many people have had the experience of being forced to do multitasking, saying, 'I have to call or send an email, and I have to do it at the same time as the work I am doing.' As a result of analyzing the facial expressions during such multitasking with an algorithm, it became clear that ' negative emotions such as anger, sadness, and fear occur during multitasking .'

Multitasking in the Workplace Can Lead to Negative Emotions-University of Houston
https://uh.edu/news-events/stories/2020/may-2020/05112020-multitasking-in-workplace-and-negative-emotions.php

A joint research team at the University of Houston and the University of Texas A & M conducted an analysis of human emotions during multitasking. The research team imposed a test on 26 subjects with an average age of 25 years, 'writing an essay within the time limit while replying to an email.' Subject was given a time limit of 50 minutes and had to reply to 8 emails during the same period.

In addition, the research team also attempted to measure the effect that the subject has on the 'multitask type'. Half of the subjects (13) were required to `` send all 8 emails 10 minutes after the start of the test and reply to all within 5 minutes '' and the other half `` 4 emails processed 1 The following email will be sent after a minute. Each email must start writing a reply within 10 seconds of receiving it. ' In other words, the former team has a 'long interruption time' and the latter team has a 'short interruption time'.

During the above test, the research team recorded the subject's facial expression with a camera and analyzed it with an algorithm to determine 'emotion'. The following are the changes in the facial expressions of the subjects who were subject to 'one long interruption time'. Taking the top-most subject as an example, the expression was 'Neutral' before receiving the mail, but 'Angry' after receiving the mail, and 'Neutral' 60% and 'Sad'. It was observed that the expression changed to 40%. On the other hand, the changes in the facial expressions of the subjects who belong to the 'multiple short breaks' group are as follows. The subjects in the top row changed from 'Neutral' to 'Sad' and then 'Afraid' 50% 'Sad' 50%. According to Ioanis Pubridis, director of the Institute for Computational Physiology, University of Houston, the lead author of the paper, said, 'The subjects who were forced to multitask showed a clear expression of sadness. The forced group showed a mixed expression of sadness and fear. ' Regarding the cause, 'Multitasking creates a mental load, and it is considered that the mental load causes sorrow.' 'For fear that is caused at the same time as sadness, I expect that the next email will probably come It may be because of it. ”

The paper published this time noted that 'especially in an open work environment, negative emotions can affect the whole, consciously or unconsciously,' and multitasking has a negative impact on individuals. Not only that, but that impact could affect colleagues, teams, and even the organization as a whole. As a workaround, we recommend that you implement measures such as ' processing mail in batches .'