What is the 'quantum steampunk' academic field that links thermodynamics and quantum theory? Just as nuclear power generation uses uranium fission to boil hot water to generate electricity, cutting-edge technology is also an extension of ancient theory and technology. Nicole Junger Halpan , a researcher of theoretical physics at Harvard University, explains the academic field 'quantum steampunk' that links thermodynamics born during the industrial revolution of the 19th century with quantum theory of the 21st century.

' Steampunk ' refers to a work that has a world view with a steam engine widely established based on the atmosphere of Victorian and Edwardian in England. ' Howl's Moving Castle ' ' Wild Wild West ' ' Final FANTASY VI 'is known as a representative example of steampunk. Steampunk, which depicts a steam engine that has developed in a brick cityscape, is a “fusion of the past and the future”. Mr. Halpern calls 'quantum steampunk' and is studying the study aiming at fusion of the past and future of thermodynamics of the 19th century and modern quantum theory.

steam engine.In modern times, it is a field that macroscopically treats the properties of multi-particle systems such as steam from various conditions such as temperature, pressure, volume and energy. . Mr. Halpan is trying to combine thermodynamics and quantum theory because he has many points in common. A typical example of the common points is ' entropy '. Entropy is used in thermodynamics as an indicator of 'irreversibility' of particles, but it is also used in quantum statistical mechanics as an indicator of quantum uncertainty.

Mr. Halpan's goal in the field of quantum steampunk is 'updating the old thermodynamics'. Halpan argues that quantum laws such as entropy functions, quantum resource theories , and fluctuation theorems in small-scale quantum systems can update traditional laws of thermodynamics .

Mr. Halpan is currently conducting theoretical research on a power engine called ' quantum engine '. A gasoline engine installed in a vehicle or the like sucks in outside air, mixes it with gasoline, and compresses this mixed gas. Then, four steps of 'intake', 'compression', 'combustion / expansion' and 'exhaust' of burning / expanding the compressed mixed gas and exhausting are repeated to convert thermal energy into kinetic energy based on the principle of thermodynamics. doing. phase transition between two phases, a thermal equilibrium phase and a multi-body localized phase, with a laser. 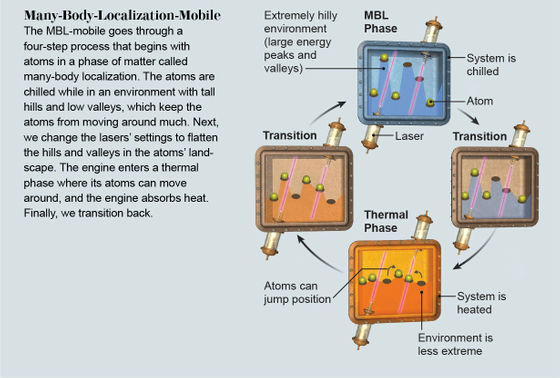 Mr. Halpan argued that thermodynamics-based molecular switches, solar power generators, heat dissipation transistors, and other technologies have been introduced in recent years, saying that 'the academic field combining thermodynamics and quantum theory is a new invention. Should produce. ' He said he could advance this discipline by integrating the theories within quantum steampunk and reviewing existing definitions and results to develop new tools.