radio telescope.' When completed, it is expected to be the largest open-air radio telescope in the solar system that can detect radio waves with wavelengths and frequencies that cannot be detected by the Earth.

Lunar Crater Radio Telescope (LCRT) on the Far-Side of the Moon | NASA
https://www.nasa.gov/directorates/spacetech/niac/2020_Phase_I_Phase_II/lunar_crater_radio_telescope/

NASA LCRT | NASA Might Build a Radio Telescope on the Moon
https://www.popularmechanics.com/space/moon-mars/a32086207/nasa-radio-telescope-moon/

When the radio telescope is installed on the surface of the moon, it is possible to measure wavelengths and frequencies that cannot be detected by the earth because it is not blocked by the thick ionosphere of the earth and various radio noises existing on the earth. The 'Moon Crater Radio Telescope (LCRT)' project announced by NASA on April 8, 2020 is a plan to utilize the shape of the crater on the moon as the base of a parabolic antenna and 'make the crater itself a radio telescope.' is.

Next, an unmanned lander loaded with a receiver that amplifies and detects radio waves is sent to the center of the crater, and a lander

loaded with multiple rover named 'DuAxel' is sent to the outer edge of the crater. 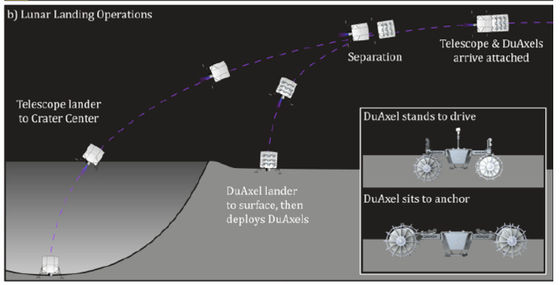 The unmanned lander automatically deploys the building materials for LCRT.

hoist fed to the center of the crater, and joined hoist the lander wire. 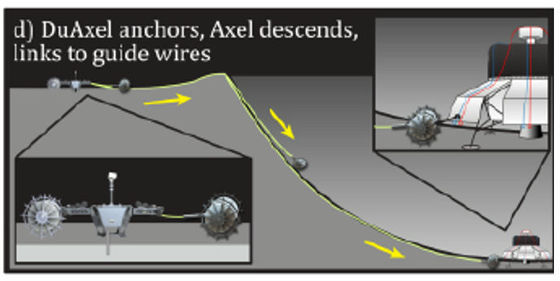 DuAxel winds up the wire and collects the hoist.

The LCRT at the time of completion looks like this. The red wire hangs the receiver in the center. The diameter of the parabolic antenna part by the wire mesh drawn in green will be 1 to 5 km. There are many orbiting satellites in Earth's orbit, making it increasingly difficult to receive signals from space. LCRT is capable of receiving low-frequency signals of 6 to 30 MHz, which cannot be received on the earth, and is expected to bring further progress to space research.

According to science news site Science Alert, NASA has invested $ 125,000 in development funds and set a nine-month deadline to determine if the project is feasible.

Technically, a project to install a radio telescope on the moon has already been implemented. A project 'NCLE ' to receive low-frequency signals by linking a small low-frequency spectrometer installed by the Chinese lunar probe ' Chang'e 4 ' and a low-frequency probe in the lunar orbit with the Netherlands The Chinese team started on May 25, 2018.