What was the design of the clock of the former Soviet rocket 'Soyuz'? During the Cold War period after World War II, the United States, which represented the western nations, and the Soviet Union, which were the eastern countries, had a fierce competition for space development. Engineer

Ken Shirriff disassembles the clock used by the Soviet Union for a manned lunar rocket ' Soyuz ' and describes the board structure on his blog. I opened the clock board. Most

integrated circuits consist of chips mounted directly on a printed circuit board . TTL circuits commonly used in the 1970s and 1990s. When I removed the metal cover, I saw a small silicon die to which the bonding wires were soldered. When the silicon die is enlarged with a microscope, it looks like this: the pink and purple parts are silicon, and the white parts are wires. The 134ЛА8 has four open collector NAND gates. An open collector is a type of operating a potential by using a transistor as a switch. A transistor is made up of three terminals called a 'base', 'collector' and 'emitter', and controls the current between the collector and the emitter through the current flowing through the base.In general, the transistor is pulled to stabilize the output. Use up resistor at the same time. This chip has one circuit for the crystal oscillator and two circuits for conversion. If you enlarge the silicon die with a microscope, you can see its composition. Semiconductors come in two This is a circuit diagram showing one of the implemented NAND circuits. If at least one of the inputs is 0, transistor Q3 turns off. At this time, the current on the output side is in an “open” state where there is nowhere to go and outputs 1 at the open collector. If both inputs are 1, the switches of transistors Q1, Q2, and Q3 are turned on, and the current on the output side flows to GND, so the circuit outputs 0 at the open collector. 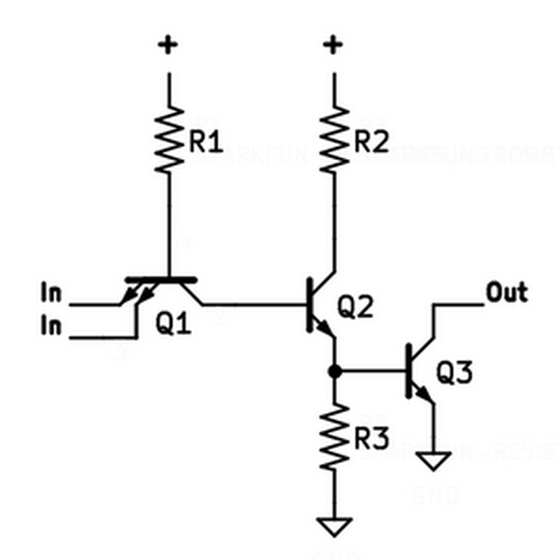 It looks like this when photographing the actual circuit with a microscope. A NAND circuit is implemented by making good use of transistors. Ken said, 'This Soviet chip is simple enough to easily trace the circuit. The latest chips today contain billions of transistors and have so many features. You cannot visually understand the contents of the chip. '