As the outbreak of the new coronavirus infectious disease (COVID-19) is progressing worldwide, measures are being taken to prevent the spread of infection, such as by blocking borders . In some cases, unexpected behavior can spread the infection. About the unpredictable behavior of people who occur while such a new virus spreads, hints from the `` pandemic of infectious disease of death ' ' that occurred in the past at MMORPG (large-scale multiplayer online RPG) with many players in the world Researchers argue that this might be obtained.

What a WoW virtual outbreak taught us about how humans behave in epidemics | Ars Technica
https://arstechnica.com/science/2020/03/that-time-world-of-warcraft-helped-epidemiologists-model-an-outbreak/ 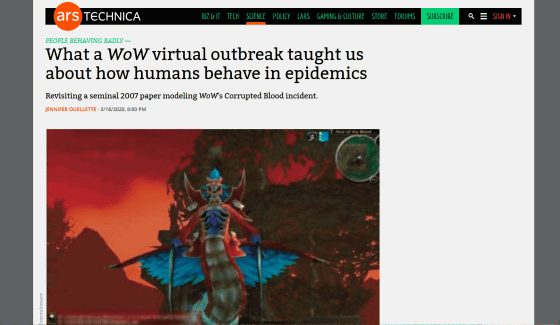 In fact, soccer spectator matches are taking place in Europe due to concerns about the new coronavirus, but many supporters are enthusiastic about packing outside the stadium. Fans rushed out of the venue during the Paris European Champions League final tournament on March 11 against Paris Saint-Germain versus Borussia Dortmund. Thus, the behavior of people during a pandemic is difficult to predict. However, researchers said that from the case of `` Corrupted Blood incident (dirty blood incident) '' that occurred in the World of Warcraft (WoW) known as MMORPG with the most players in the world, hints about actions when a pandemic occurred I think it might be obtained.

The dirty blood case occurred on September 13, 2005. Blizzard Entertainment, the creator of WoW, added a new dungeon to the game and placed an enemy named 'Hakkar' as the boss. He is said to be the god of blood, an enemy who uses the spell 'Corrupted Blood' to attack the players. 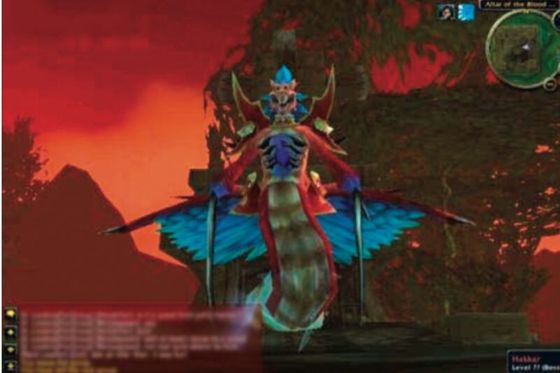 However, in WoW, it is possible for players to fight with NPCs called 'pets', and it seems that there was a programming defect that made this pet a 'carrier' of dirty blood. There was no problem if you left the dungeon as usual, but if you cancel the summon of the pet infected with `` dirty blood '' in the dungeon while fighting and summon the pet again in another place, the pet will continue Was summoned while infected with 'dirty blood.'

The 'dirty blood' taken out of the dungeon has spread to people who are not fighting Hakkar, especially in large, densely populated cities. Although the effect is canceled after a few seconds, the damage of 200 to 250 points per second is fatal for low-level players, and it seems that in many cases, they are inadvertently infected with 'dirty blood' and die as it is.

NPCs in the town also contributed significantly to the spread of 'dirty blood.' NPCs in town were designed to always regain health unless in combat, and would not die if they drank 'dirty blood.' Therefore, it seems that NPCs continued to infect surroundings with 'dirty blood' as 'asymptomatic carriers' that do not die even if infected.

If you are infected with 'dirty blood' in the dungeon, you can release the spell by withdrawing from the dungeon, but if you are infected outside the dungeon, you can not use the release by withdrawal, so low-level players will get 'dirty blood' Once infected, the condition could only be recovered by dying. However, even if you revive on the spot after dying, you will immediately get `` dirty blood '' from other nearby players and NPCs, and you will fall into a loop of `` death → resurrection → immediate infection → death '' There were also cases. 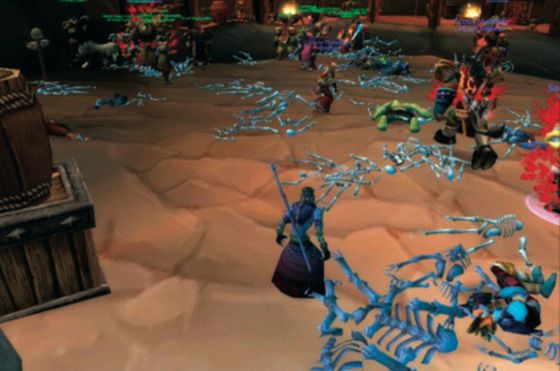 Eventually, the 'dirty blood' became uncontrollable and a panic spread among the players. Major towns and cities have been abandoned, and players have begun to evacuate to smaller, more secure countryside. However, some players continue to heal healing for people infected with `` dirty blood '' as healers, players who dare to spread infection to danger zones from curiosity, and intentionally spread infection by enjoying confusion It was said that various reactions were seen, such as players, players who were standing in the plaza of the infected town and talking about the catastrophe that occurred in the game and playing the 'end-of-the-day prophet'.

Eventually, 'dirty blood' affected WoW's multiple servers, upsetting the WoW world for nearly four weeks until October 8, 2005. Meanwhile, Eric Lofgren, who was also an epidemiologist at Tufts University and also an avid player of WoW, seems to have been fascinated by discovering the similarity to reality in the `` dirty blood case '' that occurred in MMORPG . And in 2007, Lofgren and co-author Nina Fefferman published a paper dealing with the 'dirty blood' case.

At the time of writing, Fefferman, who was at the University of Tennessee, is studying the phenomena where small individual decisions can make a huge difference in a huge population. `` The 'Dirty Blood' incident made me ponder on how people perceive threats and how perception differences change their behavior, '' said Fefferman, He pointed out that the pandemic and accompanying panic that emerged in the world could help predict the response to a real-world pandemic.

Lofgren was at Washington State University at the time of writing and is studying the impact of a pandemic on the healthcare system. 'For me, the 'dirty blood' case was a great example of how important it is to understand people's behavior,' said Lofgren, who said that viruses can spread from person to person, He claimed that actions and behaviors were involved in the spread of the infection.