A bookcase with a diorama that spreads a small world in the gap between the bookshelves `` Booknook '' is very popular all over the world, from fantasy to science fiction Booknook Summary A work created by a Japanese designer

monde that combines a diorama with a paperback book size bookcase has become a big topic mainly on the Internet, saying that it seems like a small world spreads between books, and only in Japan Not only did it attract attention from overseas book lovers. The diorama sandwiched between bookshelves has become known as ' Booknook ', and various works have been announced on the Internet.

Monde has been presenting his work on Twitter since around 2017, and has sold it at events. For example, the work below shows that a bar in Tokyo appears between paperback books.

This is a paper-size work exhibited at the art fair last March. I imagined a bar in Tokyo. It is a Japanese-like landscape with a mixture of Japanese and Western styles.

This is a small size work
tilt at an art fair last March.I imagined a bar street in Tokyo.

The work that combines this book and a diorama has become a hot topic overseas, called 'Booknook', and it has become so popular that Reddit, an overseas bulletin board site, has a dedicated forum called ' r / booknook '. Also, some people who make their own booknooks have appeared, and various works have been released on Reddit.

For example, the image below is a self-made Booknook published by Poullafouca. It is a diorama behind the alley, reminiscent of the stage of cyberpunk work. Here's what made a dim bookshelf between bookshelves. According to the author, muad_did, this work was produced by resin output using a 3D printer. In addition, 3DCG modeler Konstantin Borisov has created 3DCG data of fantasy-like back alleys reminiscent of medieval Europe and released it as open source. And Booknook created by Rick_Proza based on this data of Borisov is this. Booknook scene of the forest planet Endor, which is the stage of “

Star Wars Episode 6: Return of the Jedi ”. In Booknook, an infinitely wide spread is created by attaching a mirror to the back, but this Booknook created by macsdhart is simply printing and pasting the scenery of the forest, it seems that no mirror is used. Similarly, from the Star Wars series, Booknook, which imitates the corridor of the space fortress Death Star, is a mechanism that Darth Vader figures appear in red light when turning on the light. Warhammer 40,000 ' by looking at the following movie. Since it is a diorama board originally made for games, it has a simple structure with only painting and pasting inside the box, lighting and mirrors, but it is very elaborate.


Booknook that reproduces the back alley of a castle town where LED lanterns sway swaying. It was created by Alpha-Lyr. sculptor tom.taggart.146 is working on a booknook that looks like a monster peeping between books. For example, the following is Booknook, where an old woman like a witch sticks out her finger and looks into this place between the books of Grimm's fairy tale and Cthulhu myth .

Tom.taggart.146 has created Booknooks with a wide variety of designs, including other eerie guys leaning out of tall towers.

Booknook, which is included in the Harry Potter book series, recreates the diagonal Yokomachi that appears in the work. Show windows and acupoints placed on the shoulders glow brightly, illuminating the night of Diagon Yokomachi. In addition, Techarge, which reproduced Diagon Yokomachi with Booknook, is seeking investment from Kickstarter , a crowdfunding site, aiming to commercialize Booknook. 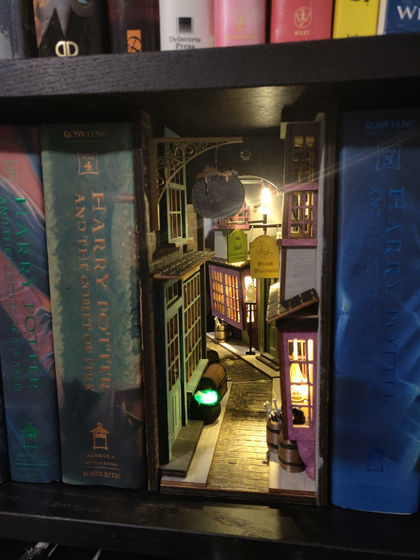