Why would an attempt to 'copy all melody copyrights' protect future music? 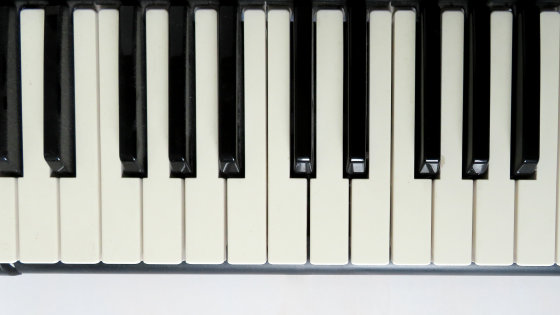 The number of companies and people affected by

patent trolls that use patents to sue for compensation and license fees is increasing every year. In order to prevent patent trolls in the music world, efforts are being made based on the reversal concept of 'creating all possible melodies and obtaining copyright'.


All men have one external storage. 'There is 2.6 terabytes, everything is here. Compress it into a TAR file,' said the man. 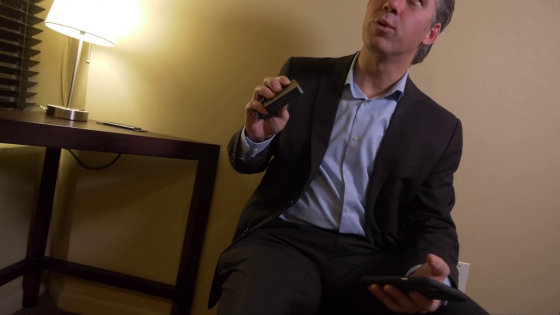 Damien Riehl . Riehl, a lawyer, got a lot of attention after giving a presentation that was a TED Talk. 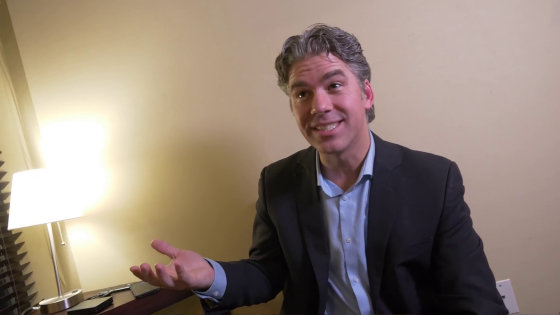 This is the presentation. In a presentation, Riehl stated that he was working on a project 'to get the copyright of every melody possible.' 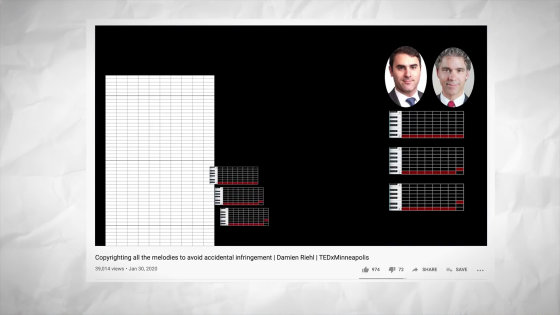 Riehl is a lawyer with a bachelor's degree in music and has been coding since 1995. He has worked as a judge for 10 years and has taught copyright law at law school. And I'm working on a project that combines my backgrounds in technology, law, and music to protect melody by copyright. 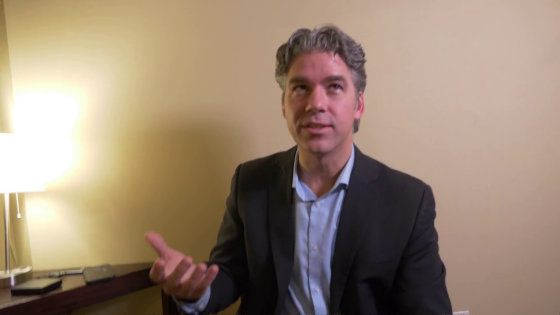 Noah Rubin, a musician who is cooperating with Riehl, is speaking from a smartphone. They thought, 'Is it possible to make all melodies brute force like a password brute force attack?' 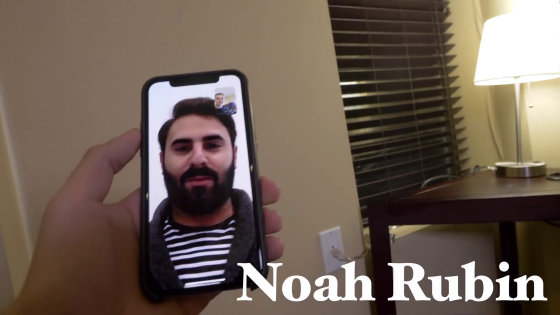 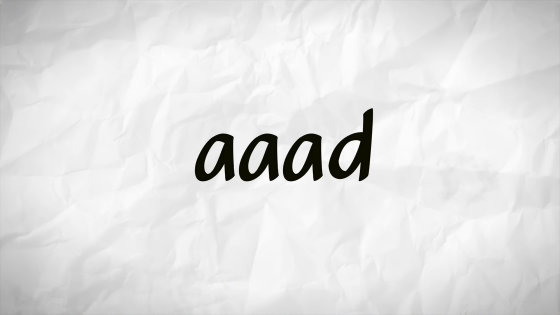 The same idea is the idea of using computers to create “all the melodies”. However, there are 12 notes in one

pitch class , and there are 88 general piano keys, so if you try to brute 'all the melody', you have to create a tremendous number of melody of 2160 tongues Hmm. A comment on YouTube pointed out that even if one melody was a byte, to complete this project, 'a place to store 186 zettabytes of data was needed. 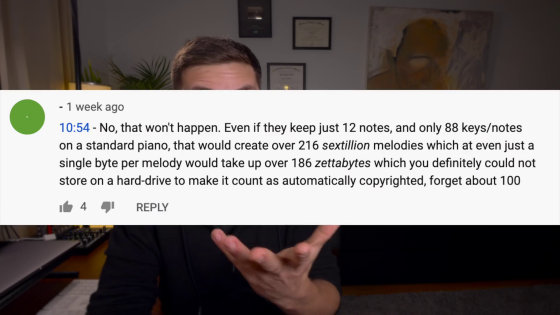 So, Riehl et al. Mathematically calculated what the melody would be like, limiting it to one octave from 'do' to 'do'. And they said that they created 68.7 billion melody of 12 scales using 8th note centered on

middle C over 6 days with computer. 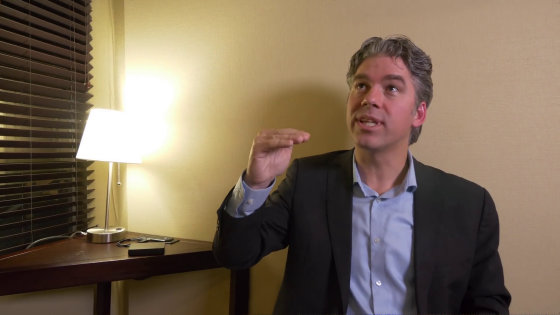 In 2012, the calculation was performed with a movie '

Will we use up the music? ', '7.8 notes melody using all 12 sounds of equal temperament over 1 octave' 7.8 billion Has been shown to dry out in 248 years, with 100 composers producing one melody per second. The 248 year is pretty real, and if you focus only on time, it's no wonder that the melody is already running out. 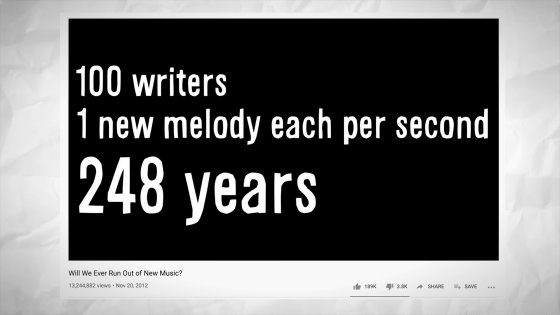 Isn't rhythm considered in this project? Riehl says, 'Pitch change is the DNA of the melody, and pitch change is more important.' 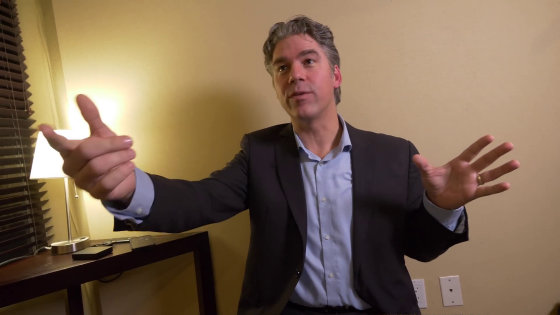 Regarding the question 'Do you not consider music that uses sounds exceeding one octave, music on a

diatonic scale , etc.?' 'We are trying to solve the problem of the average case of an important discussion for society 'We created the final dataset, and on one server we provided tools to help people do the same,' Rubin replied. 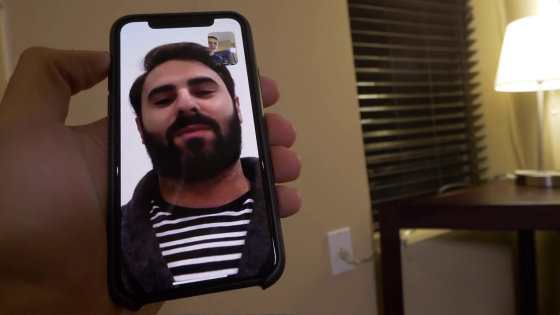 At the root of this project is that the melody is a simple permutation of parameters. Rethinking music copyright, the idea that 'one person can own a permutation' seems strange. 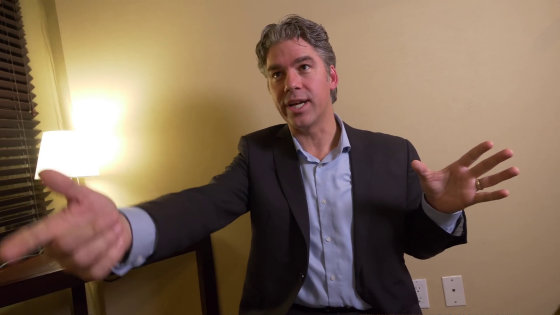 Copyrighted music has been protected for 95 years since its publication, and only one person can continue to monopolize the melody. Given the finite number of melodies created, it is possible for a copyrighted and powerful musician to claim the name of an unnamed musician 'it's my song' and crush the opponent. Riehl and Rubin are concerned about this. 'I should be able to compose without worrying about the effects of the music I heard 20 years ago,' said musician Riehl. 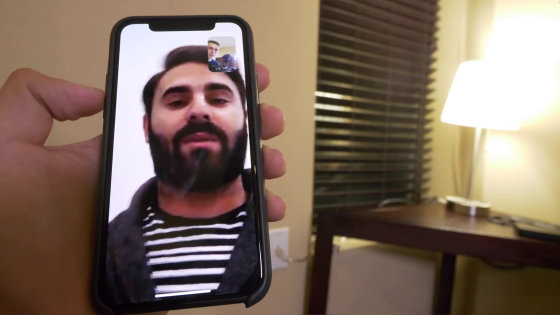 Another important point in legally contesting the copyright of a melody is the issue of access. Theoretically, it is possible for two completely unrelated individuals to independently produce the same melody. At this time, the question of 'whether or not you have access' depends on the decision of 'Which one has the copyright?'

Katie Perry 's 'Dark Horse' was also accused of stealing Flame 's 'Joyful Noise', which was the key to the decision. 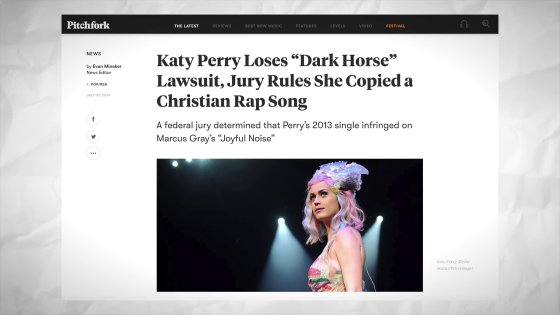 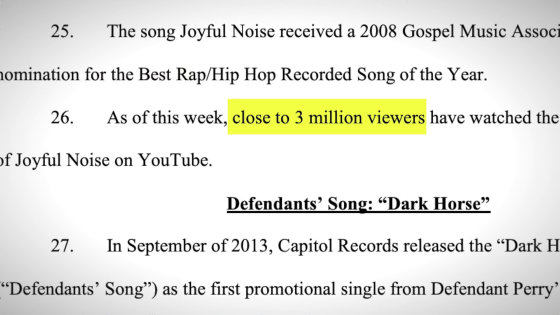 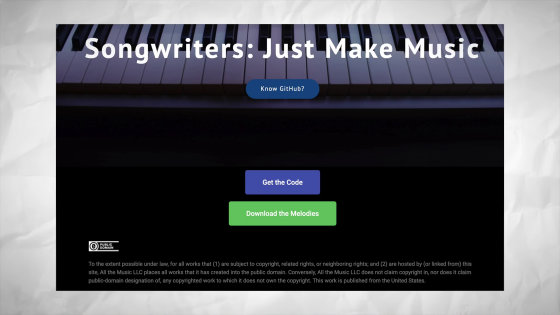 From Katie Perry's example, if `` three million views on YouTube '' is the threshold for `` access, '' theoretically, Riehl's TED Talk lecture movie and the number of views of this movie If the total reaches 3 million times, the person who made the melody made after the release of the movie must prove that 'the movie has not been accessed' in order to claim copyright. On the contrary, the goal of the project is to prevent powerful musicians from suing unknown musicians. 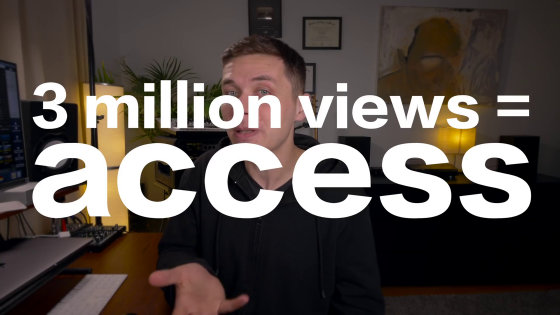 'Hearing this story, if you have a lawyer who believes in the potential, please discuss it,' Rubin said.