Why are 'beautiful and too hard to live' houses along the canals in Amsterdam? The elongated houses lining the canals of Amsterdam in the Netherlands are beautiful to take pictures of, but in fact they are not homes built just for living. With narrow and deep parcels, stairs as steep as a ladder, Amsterdam's house was originally built in the 17th century with a slightly different purpose than for a 'house'.

'From the beginning, houses along the canal were built with the intent to house, store, and office,' says architectural historian Wouter Van Elberg.

In the 17th century, Amsterdam was the port of Northern Europe. For this reason, the houses along the canals, which were used as 'places for storing and trading goods brought in from the canals', reflect the Dutch commercial spirit and the tradition of Amsterdam at the time. According to Elberg, up to 50% of the space along the canal was used as storage. Residents at the time did not live in narrow houses, where goods were lined up in storage. 'Based on the literature of visitors to Amsterdam at the time, it seems that the custom of 'Dutch houses should be luxurious' was found in houses along the canal. It is customary for

Calvinists to add `` Even in a house with only a few rooms that tended to show off decorations, the whole family could sleep together in one room to make room for the luxurious decorations, '' Elberg said. Talking.

A typical feature of a canal house is a cornice with large hooks. Many houses along the canal have an attic storage room, and luggage is regularly transported to the attic for storage. Residents needed to carry luggage upstairs more easily than carrying luggage upstairs from the stairs, so it was common to pick up luggage using winches and hooks provided in the house. The hook in the image below was used to lift the luggage. The hooks and winches eliminated the need to carry luggage from the stairs, so the indoor stairs were narrow and steep to provide more commercial space for storage. Houses with narrow and deep parcels have also found small courtyards and houses that provide space for 'backstreets.' A retreat where Anne Frank hid himself from the German army was also built using a deep parcel.

In the 19th century, the occupation of France destroyed Napoleon's commercial union, which promoted a small warehouse in Amsterdam, losing the characteristics of the canal house. By the end of the 19th century, due to changing architectural regulations and international influences, most of Amsterdam's canal houses have been converted into apartments. What used to be a working-class home has turned into a very popular property in the 21st century. 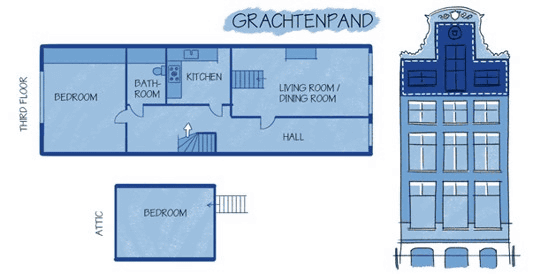 'The transition of the canal house from a merchant house to an apartment has not lost its character,' says Elberg. Many homes have been renovated to make them easier to live, but some have steep stairs or attic rooms with lower ceilings in the corners of the rooms. The architecture of the canal houses has had a profound effect on later Dutch architectural styles. There is still the idea of having one 'luxurious room', 'said Elberg.