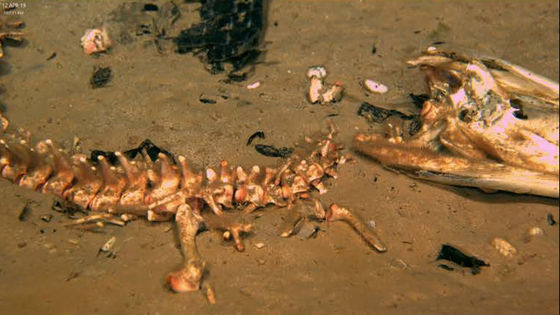 horned beetle that lives in the carcasses of the creatures that sank below the sea floor.

Alligators in the abyss: The first experimental reptilian food fall in the deep ocean
https://journals.plos.org/plosone/article?id=10.1371/journal.pone.0225345

Dead Alligators Dropped to the Bottom of the Sea Make for a Rare and Delicious Meal
https://gizmodo.com/dead-alligators-dropped-to-the-bottom-of-the-sea-make-f-1840927625

In the deep sea, where light cannot reach, plants are unable to photosynthesize, and dead carcasses of sunk organisms are a very important nutrient source. In particular, giant whale carcasses are known as whale bone communities because various creatures swarm to form an ecosystem.

According to River Dixon, a biologist at the University of Louisiana at Lafayette, not only sea creatures but also alligators living in American rivers are transported to the sea by storms and hurricanes, die, and sink to the seabed. That there is. However, unlike crocodile, crocodile was expected to be unable to easily eat even the toughest undersea creatures because the whole body is covered with a hard body surface.

Dixon and his colleagues, with the help of the Louisiana Department of Wildlife and Fisheries, obtained the corpses of three American alligators weighing 18.5 to 29.7 kg. We tied them with ropes and submerged them in three places in the Gulf of Mexico, and conducted an experiment to observe the situation with a remote-controlled unmanned underwater vehicle . At the first of the three locations, nine days after the crocodile corpse was dropped, nine

giant beetles were already found in the corpse.

It is known for eating small meals, including records that it has not eaten for more than 5 years in captivity, but it rushes its head to the crocodile body to fight for the dead and devours the dead body. The second drop point was observed eight days after the release, but nothing was left. Instead, traces of dragging something were left behind, and fragments of the rope that tied the crocodile and weights of 20.4 kg were scattered about 8.3 meters away from the release point. Dixon pointed out, 'The size of the jaws that can cut through the rope suggests that the culprit who took away the corpse might be a giant

Western shark or a shark .' 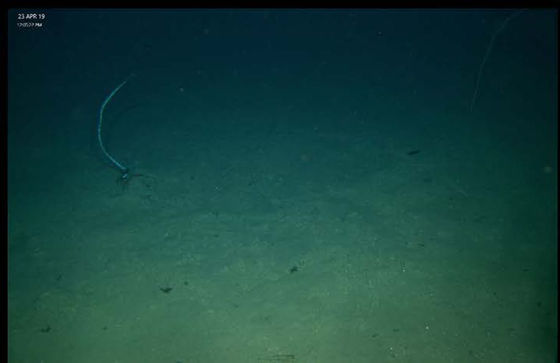 The last release point was investigated 53 days after the release. By this time, the crocodile's soft tissue had already been almost consumed, and it was almost bone-only. However, the research group has discovered a type of horned beetle that is attached to the crocodile's lower jaw partly like hair. Horn beetles have previously been found in whale bones and are also known as 'zombie worms'. When the research group collected the organism and examined its DNA, it was determined to be a new species because the DNA was different from any known locust beetle. `` This is the first time a friend of the beetle has been found in the Gulf of Mexico. I deserve it. ' The research group had previously conducted experiments on submerging bovine bones into the sea floor, but had not yet found a new species of the skull.

The research group will carry out further research in the future, and it is said that the colleagues of the beetle found this time will confirm such as 'is it a species that eats only reptile bones, or does it eat any vertebrate bones?'