The `` Dema Museum '' collecting various rumors in history is open, it is possible to read all the rumors from the Middle Ages to the 21st century at a stretch 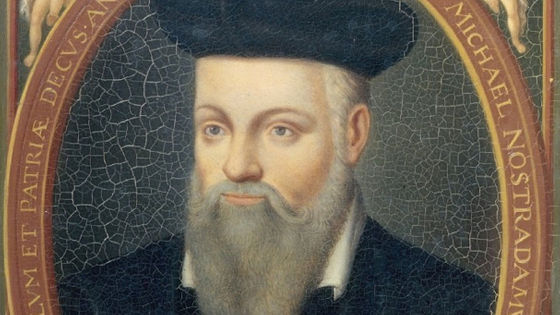 The ' Doma Museum, ' a collection of east and west hoaxes such as Nostradamus 's prophecy that terrorized people at the end of the 20th century, and Nessie , the largest mystery in the 20th century, has been published on the Internet. Published on the Internet. It is an interesting site where you can read all the hoaxes of East and West, along with the illustrations and photos from the time.

The Museum of Hoaxes
http://hoaxes.org/

When accessing 'The Museum of Hoaxes', hoax information was summarized in a blog format. Click 'Hoaxes in History' on the screen ... Since the hoaxes were grouped for each era from the Middle Ages to the 21st Century, click on 'Middle Ages' immediately. Then, the hoax distributed in the medieval era was displayed. The illustration of a human with a face on the torso displayed at the top of the page was shocking, so scroll the screen and look for it in the article ... 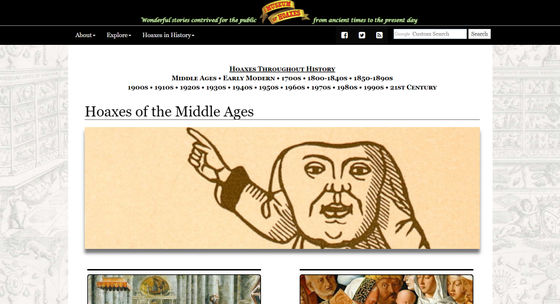 In the middle of the page, there was an article about '

John Mandeville 's The Trip to the East '. Click the thumbnail or title links to read more about the article. The `` Eastern Travelogue '' is said to be a travelogue written by the knight John Mandeville of the Middle Ages in the Middle East and Asia in the late 14th century, but according to later historians, originally written by French people It seems that it seems to be something. In Mandeville's book, there are abundant illustrations of `` wild people with horns and hooves '', `` people with eyes on shoulders '', `` vegetable baromets '', `` people with only one leg '', etc. The clergy read through Mandeville's travelogue. Mandeville was praised as the father of English literature because of the magnitude of its influence, but as the times declined and the content was discovered as a lie, Mandeville turned around and became `` the worst scammer in history '' Will be called. As a hoax of the early modern era, a rare book '

Voinich manuscript ' made around 1500 was published. 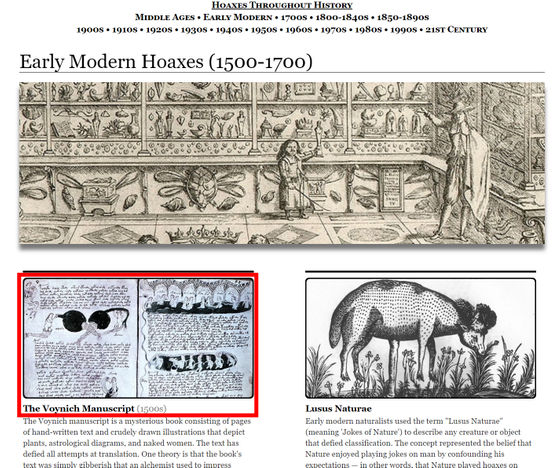 Wilfrid Voynich , and according to radiocarbon dating, it is said to have been made around 1404-1438. The greatest feature is that it includes mysterious sentences written in undeciphered characters and coloring paintings of plants that do not exist on the ground throughout. In the past, many researchers and cryptanalysts have tried to translate, but all have failed, and in recent years it is thought that the book itself may have been crafted to deceive someone . Homage collection of Rev. Michel Nostradamus , published in 1555, is a hoax representative of the early modern era. However, at the time Nostradamus was renowned as a renowned astrologer, and this book was not considered a hoax, but rather a truth that would happen. Nostradamus's prophecy is heard as a hoax several centuries after the death of Nostradamus. The Book of Rev. Michel Nostradamus's Prophecy is written in very vague Old French, so its contents can be interpreted in any way. As a result, a wide range of things, such as the

Great Fire of London in 1666, the rise of Adolf Hitler , and the Iranian Revolution of 1979, were spread by Nostradamus followers as 'hit predictions.' Also, after the 9/11 terrorist attack in the United States (9.11), poems that Nostradamus predicted the incident circulated around the Internet, but that poem was not even written by Nostradamus in the first place . Next, let's look at the 18th century. Usually, hoaxes often make up non-existent things, but there is also a hoax that real things are treated as hoaxes. That is the 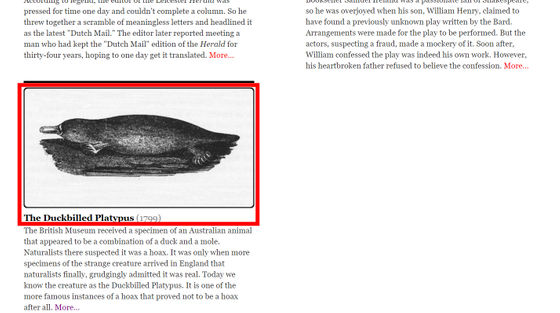 Hunter John Hunter , Governor of New South Wales, Australia, handed over the stuffed platypus to the zoologist George Shaw at the London Museum of Natural History . However, Shaw argued in a paper published in the journal Naturalist's Miscellany that he 'can't help doubting that it is real.' Other scholars have also stated that stuffed goods would be fake made by a Chinese sailor by joking a bird's beak and an animal's torso. The platypus was a 'real hoax', but the ' 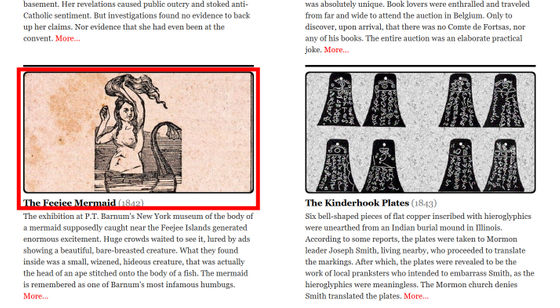 The hoax that there is a mermaid in Fiji originated from the 'Mummy that combines fish and monkeys' sold by a Japanese fisherman to a Dutch merchant in around 1810. At the time, Japanese fishermen and residents of the East Indies said that a mummy was sewn to the upper body of the monkey and the body of the fish for religious purposes. The American

showman Phineas Taylor Burnham , who picked up the mummy, made it a real show even though he knew the mummy wasn't a real mermaid. This Burnham was also a model of the movie ' Greatest Showman '. 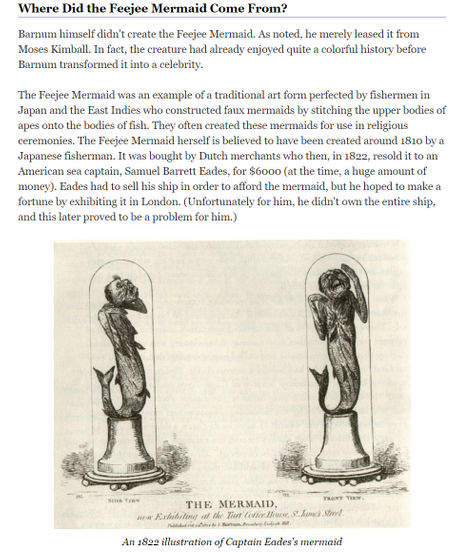 In recent years, it has been a long time since the danger has been shouted at the The Global Warming Hoax is based on an article published in the Kansas City Times in early February 1874. According to the article, Italian astronomer

Giovanni Battista Donati claimed that `` a transatlantic telegraph cable upsets the balance between magnetic and gravitational forces, causing the Earth to quickly approach the sun and turn into a burning hell. '' He was told that he was weak and died of disappointment. True, there is an Italian astronomer of the same name, but he has never made such a claim, and his cause of death was glandular plague rather than despair. Hoaxes have been compiled every 10 years since the 20th century. In the 1910s, there was a hoax on the

Piltdown , known as the biggest cheat in modern science history. In 1912, a British amateur archeologist Charles Dawson discovered a skull fossil at Piltdown near East Sussex. The human species from which the fossils originated were named Piltdowns from the site of their discovery. Since the Piltdown people had a large brain and a primitive jaw, at the time it was said that it was `` a

missing link of evolution connecting apes and humanity '', and 250 papers were published by the end of the 1940s . However, dating and analysis performed in 1949 revealed that the fossils attributed to the Piltdown were 'the skulls of the Cromagnons and the lower jaw of the orangutan,' which revealed that they were fabricated. surgeon's photo ' of Nessie appeared. In Lake Nes , Scotland, United Kingdom, witnesses to giant beasts that often live underwater have been recorded since 565 in the Christian AD, when a bishop from Ireland, a priest from Columba , encountered a `` water beast '' on the Loch Ness near Lake Loch Ness. Has been reported. A series of eyewitness testimonies were suddenly famous as Nessie's legend with the appearance of `` photographs of surgeons '' allegedly taken by London doctor Robert Kenneth Wilson in 1934, but Wilson's acquaintance was actually It has been revealed that this is a trick photo made using a submarine and a model. 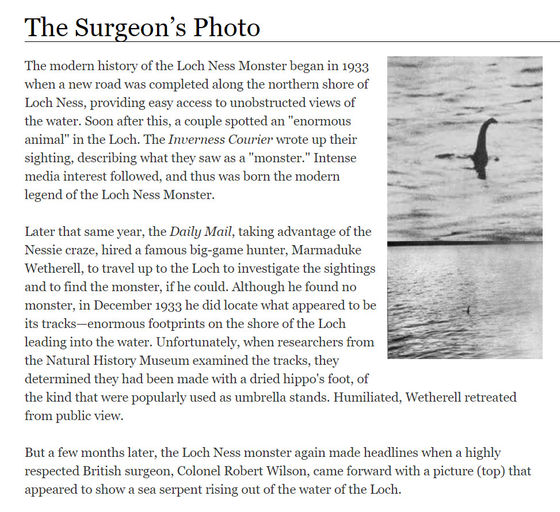 Paul McCartney of the Beatles was replaced with a look-alike, and ' Paul's death theory ' that he was already dead was reported in the newspaper. Indeed, on January 7, 1967, McCartney's car, the Mini Cooper, had a traffic accident, but the driver was not McCartney but another person, and no fatalities have occurred. However, those who truly received Paul's death theory performed extensively `` searching for clues leading to Paul's death '' such as `` The jacket of the Beatles album ' Abbie Lord ' is a metaphor of Paul's funeral '' 'Paul's death theory' was a big hit among some fans. By the end of the twentieth century, there were many hoaxes via the Internet. One of them is the rumor of the witch legend that spread to the United States under the influence of the movie

Blair Witch Project , which was released in 1999. This movie, 60,000 US dollars while (about 6.57 million yen) that ultra-low budget, worldwide box office revenue 200 million 40.5 million US dollars movie that made a big hit that (about 26.3 billion yen), the hit of the background official site It is said that clever marketing that utilizes is involved. Strictly speaking, it is not a hoax, but a publicity is posted on the official website of the movie, but on the site, interviews with police officers regarding search for characters who have disappeared in the play and investigation materials etc. are released Many viewers misunderstood that witch legends exist. Pale Stoneware Forging Case ' was taken up. This incident was a forging incident caused by archaeologist Shinichi Fujimura, who was named `` God Hand '' at the time, embedding stone tools that were not actually excavated in archeological sites, as if they were dug out as if they were real That was. Most of the early and middle Paleolithic studies in Japan for the past quarter century have lost value due to this fabrication, and many other textbooks certified by MEXT have to be rewritten. The incident has evolved into one of the largest scandals in Japanese archeology.