Explain why a person who sold a '.org' domain sold it Richard Burns, a member of the Internet Society (ISOC) board of directors who sold the '.org' domain, explains 'why ISOC unanimously decided to sell the .org domain?' The

In November 2019, the public interest registry (PIR) , a non-profit organization that manages the `` .org '' domain, which is used mainly by non-profit organizations and schools, is an investment company Ethos Capital It was sold to . However, since the upper limit of the registration fee that PIR can charge the registrar of a domain registrar in June 2019 has been removed , many Internet users view this transaction as a problem. Finally, it has developed into a situation where a large-scale anti-signature involving the Wikimedia Foundation and Creative Commons participates.

The details of the process from the removal of the price limit for the '.org' domain registration fee to the sale to an investment company are summarized in the following article.

What led to the management of the “.org” domain being sold to an investment company just a few months after its establishment? -GIGAZINE Burns admits, “There is no doubt that“ .org ”has had a major impact on the identity and brand of nonprofits”. On the other hand, “The Internet is bigger than '.org' and the mission of ISOC is a much bigger project than just a domain name lease,” he said. Emphasis. Regarding the sale of PIR, “It is true that the revenue from '.org' was stable, but most of the revenue was forced to go into a single business, and this situation grew into a large organization PIR It has become increasingly unacceptable, and the sale of PIR to an investment company allows us to generate more predictable revenues and a longer mission. ” He explained that stabilizing ISOC's earnings and securing a freely available source of revenue were the biggest decisive factors in selling PIR.

Also, in response to concerns that organizations using the “.org” domain face a sudden increase in domain registration fees, “I understand, I ’m worried, but the rate increases are limited to a maximum of 10% per year. Even if the registration fee of $ 10 (about 1094 yen) is increased by 10% every year, it will only be $ 26 (2846 yen) in 10 years. ' “Ethos Capital states that it “ lives in the spirit of historical practices ”and promises to set the same price as when the PIR was under ISOC.”

However, there is a skeptical view of Mr. Barnes, who sells in response to the claims of Ethos Capital. According to the bulletin board of the social news site Hacker News, which explained Mr. Burns, “Inflation is generally stable at 1 to 4%, but if it rises by 10%, the price will double in 7 years and in 20 years. Comments are pointed out, 'even the current $ 10 fee is a big burden for non-profit organizations in developing countries,' optimistic about price increases There are many voices that deny Mr. Barnes's view. 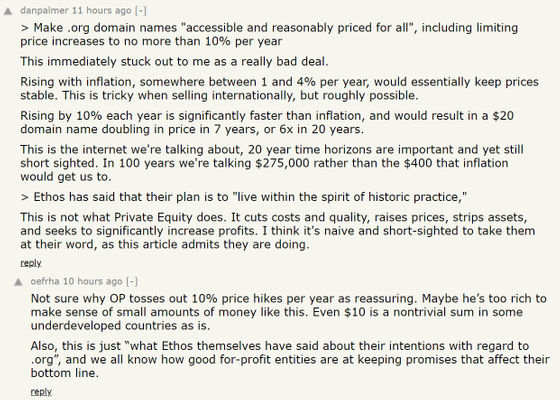 Jacob Malthouse, a former employee of the domain database management organization Internet Corporation for Assigned Names and Numbers (ICANN) , said: “I don't have the right to sell '.org' to ISOC. It is necessary to obtain community consent on what to do with the domain, but the 13 ISOC Board members do not have prior consultation instead of obtaining community consent. Suddenly sold the “.org” domain, which is not in line with any Internet governance model, ” accused “ supporting the Save .ORG ”campaign against the sale of“ .org ”. did.

So Much Everyone Thanks. We Will Do Our Utmost To Honor Your Support And Save .Org For Nonprofits. Https://T.Co/hW7GWdRIZR #SaveDotOrg #Webwewant # Igf2019 #Nonprofit #Isoc #ICANN #Charity #HumanRights #ClimateChange #Internet

・ Continued
The sale price of the “.org” domain turned out to be over 120 billion yen, experts pointed out that “the sale price is too cheap” 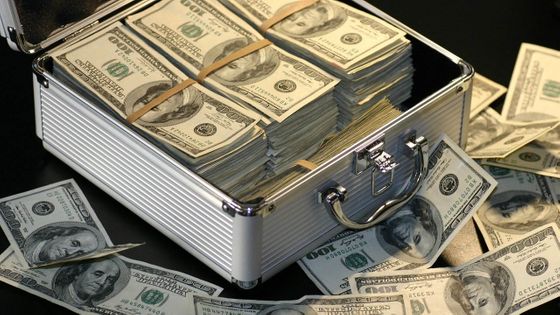