A game based on Disney's classic movies “ Aladdin ” and “ Lion King ”, which appeared for Super Nintendo in the 1990s, seems to be back in 2019 as a cassette for retro games.

Disney's Aladdin and The Lion King Get Special Editions With Playable Cartridges-IGN
https://www.ign.com/articles/2019/10/23/disneys-aladdin-and-the-lion-king-get-special-editions-with-playable-cartridges

International game maker Nighthawk Interactive will release 'Disney Classic Games: Aladdin and The Lion King' on October 29, 2019, transplanted ' Aladdin ' and ' Lion King ' released over 20 years ago as a game for Super Nintendo Will be released for PlayStation 4 / Xbox One / Nintendo Switch / PC. The price is $ 29.99 (about 3300 yen).


Disney Classic Games: Commemorating the release of Aladdin and The Lion King, the games “Aladdin” (1993) and “Lion King” (1994) are nostalgic overseas versions of Sufami SNES and overseas megadrives GENESIS. Limited edition products made for cassettes will be sold at iam8bit , which handles game-related goods. 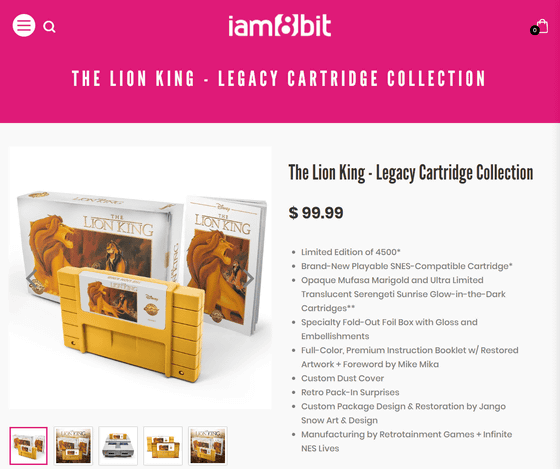 Two cartridges for retro games can of course be played, and instructions with restoration artwork from past works are also included. Shipment is scheduled for the beginning of 2020, and advance reservations start at 10:00 local time on October 24th.