What is the reason why 'Old Tjikko', which is over 9500 years old, does not die? 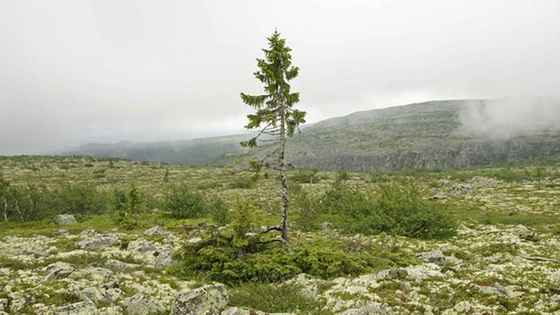 The oldest tree in Sweden, '

Old Tjikko ', is over 9500 years old. When you think of old trees, you tend to think of giant trees like Jomon cedar on Yakushima, but Old Tjikko is about 5 meters high and has a thin trunk, so it doesn't look like it has lived for more than 9,500 years. Old Tjikko has been able to survive for thousands of years because of its special survival strategy.

The World's Oldest Tree Lives in Sweden | Swedes in the States
https://swedesinthestates.com/the-worlds-oldest-tree-lives-in-sweden/

Old Tjikko, over 9,500 years old, was discovered in 2004 by professor of geophysics, Leif Kalman. The name Old Tjikko is named after the Siberian Husky 'Tjikko' owned by Mr. Kalman at the time. Biologically, it is a type of conifer called 'Norway spruce ' and mainly inhabits the Furufjelet Mountains in Dalarna County, Sweden.

Kalman said, 'In order to know the changes in the ecosystem caused by climate change in the last 100 years, it is necessary to investigate how trees responded to climate change that occurred long ago.' The person who is. Kalman, who discovered four Norway spruces in the Furufjelet Mountains in Darana, analyzed pieces of wood using a dating method called the carbon-14 method. As a result, it was shown that the age of each tree is 375, 5660, 9000, and 9550.

This is Old Tjikko. The height is about 5 meters, and it looks like you can't imagine 'living for nearly 10,000 years'. In fact, Norway spruce is not a single tree, but forms a clone that regenerates trunks and branches from the same root. The lifespan of the trunk of Norway spruce is said to be 600 years, and even if the trunk dies, it will continue to live by growing young trees with the same gene from the roots. 'The past 10,000 years have been a cold summer, and the Norway spruce trees were able to survive the harsh conditions because of their ability to produce another when one trunk died,' Kalman said. I ',' big trees 'a result of our research with states that do not live so long' is some sort of Picea Abies is not affected by the harm of fire-pathogen-insect 'eternal life' that you have a I strongly support it. '

On the other hand, there are some doubts about Mr. Kalman's research that Old Tjikko is about 9,500 years old. 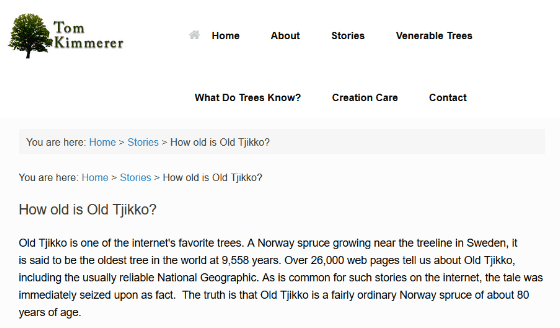 Forest researcher Tom Kimerer first mentioned that the existing Old Tjikko was about 80 years old, and the pieces of wood contained in the soil around Old Tjikko were about 9500 years old. Did. The idea that this piece of wood belongs to Old Tjikko is only a 'hypothesis', and the studies published so far do not show evidence that the two are genetically identical. There is a lot of information on the internet that treats Old Tjikko as one of the oldest trees, but 'there is no evidence that Old Tjikko is over 80 years old,' Kimaa claims.