Past research shows that there are health benefits to spending time in nature, and there is a “ green prescription” that “prescribes” gardening and other medicines instead of medicine. However, many modern people have limited time available. Therefore, a researcher from the UK conducted a survey of 20,000 people living in the UK from 2014 to 2016, and identified a “sweet spot” that would be effective by touching nature.

Spending at least 120 minutes a week in nature is associated with good health and wellbeing | Scientific Reports
https://www.nature.com/articles/s41598-019-44097-3

Spending two hours a week in nature is linked to better health and well-being
https://theconversation.com/spending-two-hours-a-week-in-nature-is-linked-to-better-health-and-well-being-118653

For Just 2 Hours a Week, There's a Simple Practice That Could Make You Healthier
https://www.sciencealert.com/a-simple-lifestyle-change-requires-just-2-hours-a-week-but-it-could-make-you-happier-and-healthier So far, research has shown that sleeping in a tent can treat insomnia , and spending time in green spaces has various effects such as increasing the survival rate of stroke, lowering the suicide rate, and lowering the risk of diabetes Has been reported. However, past studies have not clearly shown how much time is spent in nature to get the effect.

Therefore, the researchers conducted a survey in the form of asking questions from the subjects of the “ Natural Environment Survey ” conducted by the British government. The interviewer asked the subject, 'How much time have you spent in urban parks, forests, beaches, etc. in each day for the past 7 days?' After that, select random subjects from all subjects, and ask in more detail, “How many hours have you spent in nature,” “Who went with”, “How did you get to your destination”, “What was your purpose”, etc. It was. Through this detailed interview, it was possible to learn not only the “highlights” that were memorable but also the overall information. The subjects were also asked about “life satisfaction”. 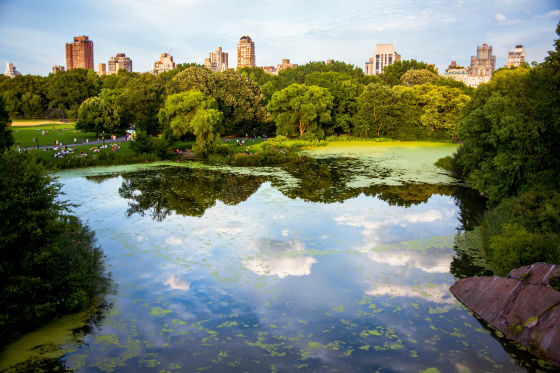 From this, the researchers conclude that the “threshold of 120 minutes per week” is the threshold. Researchers say that if it's less than 120 minutes, it's not enough to get significant benefits, but if it's longer, people who have long-term illness tend to report improved health and well-being, It was.

The results of the survey do not show the difference in effect due to the purpose of 'taking a short walk several times' or 'picking over a long time'. It is important to spend 120 minutes a week in nature in any way. This trend was consistent regardless of differences in conditions such as age, gender, wealth, presence or absence of illness or disability, and place of residence. Researchers, on the other hand, note that this survey is based on subject's subjective reports and that it is a cross-sectional study that measures at a certain point in time. Although the researchers are doing their best in the survey, there are still possibilities that the subject may have made a mistake in memory, or that they were nervous about interviews and could not answer honestly about their health and well-being.

In addition, researchers acknowledge that this result may be related to 'being moving' rather than 'time spent in nature', but the UK It is also shown that the above trends apply even if physical activity guidelines are not met. It is thought that further research is necessary to know the essence of this phenomenon, and researchers have stated that they want to conduct long-term research in the future.