A material that absorbs 99.995% of light was born and updated the “world record of blackness”, more than 10 times the blackness of the previous world The world's blackest material that absorbs at least 99.995% of light was discovered by chance in the course of research on carbon nanotubes. This material is 10 times blacker than “

Vantablack ”, which was the blackest material in the world so far.

This “blackest material in the world” was discovered by chance by Professor Brian Wardle of the Department of Aerospace Engineering at the Massachusetts Institute of Technology (MIT) and Kehang Cui, a materials scientist at Shanghai Jiao Tong University . The two were experimenting with growing carbon nanotubes on the surface of the aluminum foil to increase the electrical conductivity and thermal properties of the aluminum foil.

As a result of the experiment, the electrical and thermal conductivity increased and the experiment was successful. However, what surprised them was the color of the finished material. According to Cui, “I remember that carbon nanotubes were black before they grew, but after that they looked“ blacker ”,” he said.

Two people who noticed that this black color is not unusual measures the light reflectance of the material. As a result, the born material was found to absorb at least 99.995% of light from all angles. Since the absorption rate of Venta Black, which has been regarded as the “blackest in the world”, is 99.965%, the new material boasts a light absorption rate 10 times higher than that of Venta Black. At the time of publication, this new material is not named.

At the same time as this research, a project called “Art Science” was collaborating with MIT artist Diemut Strebe . So Strebe is a project called `` The Redemption of Vanity '' that paints yellow diamonds with a market value of 2 million dollars (about 220 million yen) with the newly developed material and literally `` black '' I dared to. 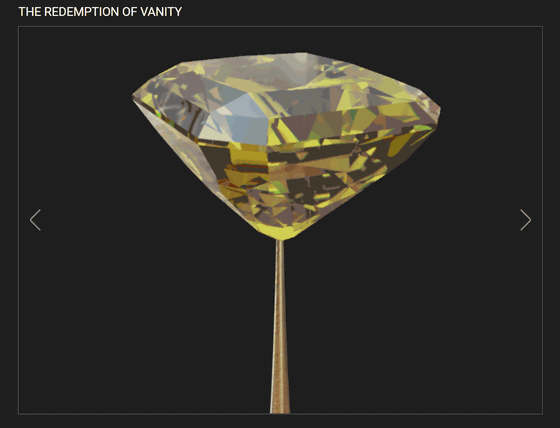 This is the yellow diamond before it was made black. It weighed 16.78 carats and was a natural diamond. Before (left) and after (right) are below. Yellow diamonds painted with a new material are assimilated with the background, so you can't see it. However, when you zoom in, it is blacker than the background, so the outline of the yellow diamond appears to rise. The Redemption of Vanity was published on the New York Stock Exchange on September 13, 2019.

The research team thinks that this material is “why black” because carbon nanotubes deposited like a forest confine almost all incident light, but the detailed principle is unknown at this stage. “We need more research on the mechanism of blackness,” says Wardle.

The black material and the shape of the material itself are promising for use in the light-shielding part of telescopes mounted on spacecraft. However, the human eye does not seem to know the “difference in blackness” between this new material and Venta Black.