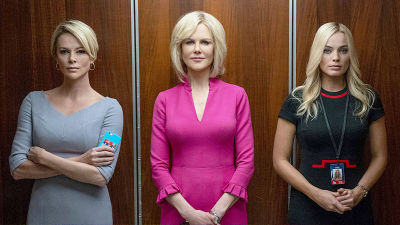 In 2016, a popular female caster from American TV station

FOX News accused FOX News founder Roger Ayles of sexual harassment. Ailes initially denied the appeal of `` I was fired if I was forced to refuse sexual relations '' as `` false '' and `` insulting '', but similar damage became clear one after another, Ames decided to resign Become. A trailer of “ Bombshell ” has been released that turns this incident into a big scandal into a movie by appearing in Nicole Kidman , Charlize Theron and Margot Robbie . The title “Bombshell” is a word meaning bomb, shock news, and sex symbol.

Employees are staring at the back and can see that Kaiya's actions are the focus of attention.

I pressed the button on the second floor with a trembling hand.

Following Kaiya, the staff will board the elevator one after another.

Kaiya asks about Meghan's state of sight only.

And when Kaiya takes his eyes off ...

Meghan was also listening to Kaiya.

Only 3 people in the elevator.

Gretchen opens his mouth to say something ...

Look at the elevator buttons without saying anything.

And do nothing and stand on the elevator. Apparently the destination of the three people was the same.

Immediately before the elevator doors closed, Gretchen lifted his mouth for a moment as if it were a caster's trap.

Gretchen shows a gesture as if trying to calm down.

Kaiya who dares to take his eyes off Gretchen.

And when we arrive on the second floor, Gretchen gets off the elevator ...

Megan remains in the elevator alone.

After that, I enter the room with Gretchen and Kaiya.

It was a minute that I was told that there was something to be said about 'I can't say anything'.

Bombshell is directed by Jay Roach , known for “ Austin Powers Gold Member ” and “ Meet the Parents ”. The nationwide release is scheduled for December 20, 2019, and the release date in Japan is undecided.

Gretchen Carlson is giving a talk at TED about the sexual harassment he has received and the current state of harassment experienced by women around the world.

How we can end sexual harassment at work | Gretchen Carlson-YouTube