How was 'Gesture Navigation' implemented so that the 'Back' button is unnecessary on Android 10 Q? On August 7, 2019, Google released Beta 6, which will be the final beta version of Android 10 Q , the next version of Android . In Android 10 Q, a new operation method called `` gesture navigation '' has been added from Beta 3 and you can operate by swiping and long pressing on the screen instead of the button that was placed at the bottom in Android so far Is now possible. About such gesture navigation, Android development staff has published statistics on development on the official blog.

In Android 10 Q, in addition to the conventional 3-button and 2-button operations, you can select gesture navigation operations. In Gesture Navigation, swipe from the right or left edge of the screen to display “Back” and swipe from bottom to top to display the “Home Screen”. The development staff believes that the following three points are the advantages of gesture navigation.

-Faster, more natural and ergonomic smartphone operation.
-It can be operated more consciously than a software button and can be activated simply by grabbing the smartphone.
-Since it is not necessary to draw the bar where the button is placed as much as possible, the amount of content displayed increases and the feeling of immersion in the app increases.

However, the development staff also raised the following issues regarding gesture navigation.

And above all, we found that the fragmentation problem grows when the gestures differ for each Android smartphone. Therefore, Google has standardized future gesture navigation in cooperation with partners such as Samsung, Xiaomi, HMD Global, OPPO, OnePlus, LG, Motorola. In other words, gesture operations will be standardized on many smartphones from Android 10 Q devices.

The following image shows the reachability of the thumb on the smartphone screen. The left shows the area where the left thumb moves comfortably and the right shows the area where the right thumb moves comfortably. You can see that the thumb can tap the edge of the screen even with a phone with only one hand, and the semicircle above the lower corner of the dominant hand shows high accessibility. The development staff said, “It is not the goal to change the user's behavior by applying a new gesture navigation,” and said he tried several methods that could distinguish the gesture to open the navigation drawer from the “back” gesture. That. 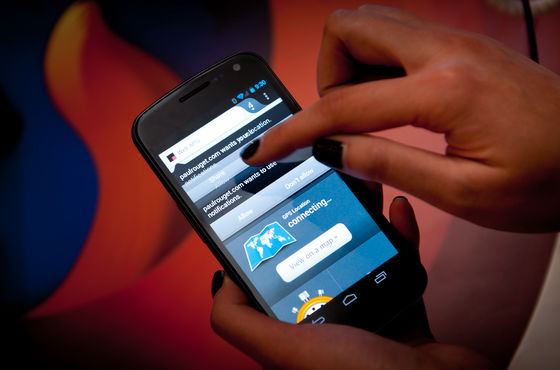 Through the test, the gesture to open the navigation drawer and the “return” gesture were applied and distinguished, and after about 3 days of testing, it was found that the majority of users were able to distinguish between these two gestures. In the end, many users did not want to return to the traditional 3 button from gesture navigation.

According to the development staff, additional research found that there was an adjustment phase of approximately 1 to 3 days before users became accustomed to the new system navigation. During that phase, the average number of “back” operations by the user was almost the same for gesture navigation and that for 3 buttons. 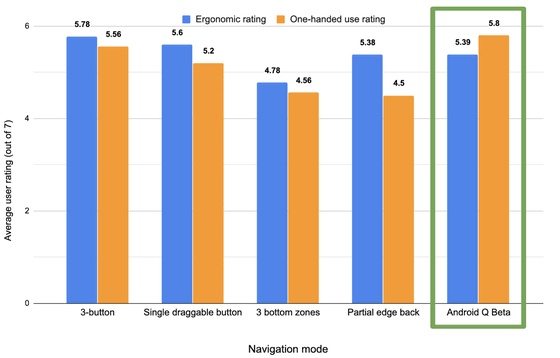 From these data, it was found that Android 10 Q gesture navigation can perform tasks related to 'Home' and 'Back' faster than any other navigation model. However, using Gesture Navigation has reduced the frequency of access to the overview and “Recently Used Apps”.

The Android development staff said, “We use gesture navigation to improve and standardize the Android user experience. The current model is the best model for most users, but some gestures already exist “It ’s competing with the app ’s gestures, so the developer needs to coordinate the user ’s app experience. We take responsibility for Android developers seriously and want to support it.” The specific support method will be explained on the blog.