The Gaza Strip , the administrative division of the Palestinian Authority , is a region that is under intense military attack from the besieging Israeli army. Due to the military instability, the area is constantly in short supply of fuel and supplies, and various infrastructures have been devastated. For such a Gaza Strip, the “ Glia Project ” is being promoted to “enable local production of medical supplies with 3D printers”.

Basic medical supplies such as gauze and plastic gloves are rarely available in the Gaza Strip in Israel. In the past, there were 1800 tunnels between Egypt and Gaza, and it was said that goods could be exchanged through the tunnel, but there were many cases where goods did not reach due to the feelings of the Egyptians, so although it was a stable distribution It seems that there was not. Dr. Tarek Loubani, an emergency room in Ontario, Canada, has been visiting Israel regularly since 2011. Loubari thinks that a stethoscope of 200 dollars (22,000 yen) can be created with a 3D printer for 3 dollars (about 330 yen) and uses 3D printers and open software to produce medical supplies at low cost The “Glia Project” was launched. Stethoscopes approved by the Canadian Health Department can be designed and printed out using FreeCAD , an open source CAD software.

It takes 15 hours to output 4 stethoscopes with 6 3D printers. The output is a part that touches the patient's chest, a Y-shaped piece that separates the picked up sound into both ears, and a part called a spring that keeps the ear pad part at a certain distance. In addition, the tube that conveys sound will be diverted by cutting the tube used in soft drink cup vending machines to the required size. The tube is approved for use by the US Food and Drug Administration (FDA) for both food and medical devices. For example, if an off-the-shelf stethoscope is distributed to about 4,000 doctors in the Gaza Strip, even if the stethoscope costs $ 200 each, the cost of bringing it into the Gaza Strip is about $ 350 per capita The cost of 39,000 yen is estimated. However, if you use a 3D printer, even if you consider the costs of packaging and distribution, it will be a calculation that can be suppressed to 5 dollars (about 550 yen) per one. In other words, it is possible to raise the entire medical system in the Gaza Strip for about $ 20,000 (about 2.2 million yen). 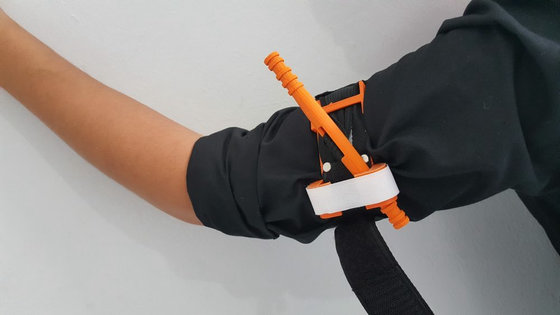 Loubani says that in the future, the pump, controller, and flow meter used for artificial dialysis will be able to be made by the Glia Project. The dialysis machine used for artificial dialysis is priced at 35,000 dollars (about 3.8 million yen), and disposable instruments cost about 100 dollars (11,000 yen) each time. For this reason, there are not enough supplies available in the Gaza Strip, so it is likely that you will be able to take away disposable instruments, wash them, and reuse them until they are completely destroyed. Of course, using disposable medical equipment is hygienic.

On the other hand, if it is a machine for artificial dialysis developed by Mr. Loubani, it is thought that the cost can be reduced to about 500 dollars (55,000 yen). However, Mr. Luubani says that it currently costs about $ 15,000 each to prepare new tools and standards for introduction.

In the Gaza Strip, where the entire infrastructure has been devastated, securing electricity to run 3D printers is also a major issue. To solve this problem, Loubani also participated in a multi-million-yen project to install solar panels in a hospital in the Gaza Strip. If solar power generation is established, not only 3D printers but also medical equipment in hospitals can be guaranteed.

“I'm not smart enough to read what ’s happening in the news and explore the reality that ’s happening in the field. If I do n’t go to the Gaza Strip, Someone may have understood that there is a shortage of medical supplies, but it is difficult to understand how the shortage will be realized. “I have a lot of useful things to work in the Gaza Strip, so I can be a better doctor for both Canadian and Palestinian patients. Is the best reason to push this project forward. '