A bill to impose large fines for antitrust violations appears, is the target a huge IT company with GAFA at the top? Facebook was fined $ 5 billion by the Federal Trade Commission (FTC) for inappropriate handling of personal information. While this seems to be substantial, there is also an opinion that Facebook's annual sales are not as high because it reaches 55 billion dollars (about 5.9 trillion yen). Some of the senators took the latter opinion, and submitted a bill to allow them to impose even higher fines, primarily to deter violations of the Antimonopoly Act. 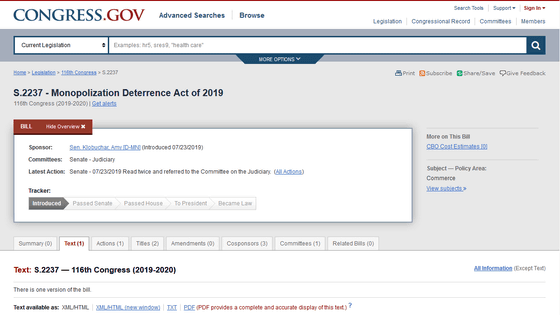 The bill was submitted by Democratic Senator Amy Krobchar and Senator Richard Blumenthal, who were also supported by Senator Diane Feinstein and Ed Marquee.

“The country has a big“ monopoly ”problem,” said Krobchar, who is accused of being a Democratic candidate for the US presidential election in 2020.

The thing that the members of Krobcher are concerned about is that there is no “competition”. If companies compete, consumers and other companies can get low-priced, high-quality products. However, if “market power” is exercised against the market, the speed of innovation will decrease. Or economic inequality will arise. Among them, Krobcher alleges that the Department of Justice and the FTC seek civil fines for the purpose of deterring the “monopoly act” set forth in Article 2 of the Sherman Act and for other purposes. You should admit that.

Already, it is possible to impose fines for antitrust violations or anti-competitive exclusive acts, but Krobcher said that “15% of total income in the previous year in the US” or “ He said he was considering fines as high as 30% of US revenues from trade or commerce related to illegal activities.

The Justice Department has announced that it will conduct investigations on antitrust violations against Google, Facebook, Amazon, and it seems that it will take several years to get the result, but in the meantime the bill submitted by Congressman Krobcher If you go through, it can be quite expensive if you are fined.