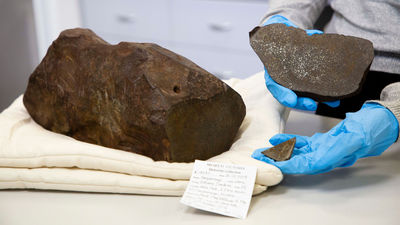 One day, a man who accidentally found that 'rock contains gold' has been holding the rock for several years. However, it is reported that the rock was actually found not to be gold but 'a rare meteor that existed since 4.6 billion years ago.'

Prospector's mystery rock was no nugget, but something much rarer
https://www.smh.com.au/national/prospector-s-mystery-rock-was-no-nugget-but-something-much-rarer-20190716-p527pi.html

Man Keeps Rock For Years Thinking It's Gold. Turns Out It's a Super Rare Meteorite
https://www.sciencealert.com/man-holds-onto-rock-for-years-thinking-it-was-gold-turns-out-it-sa-super-rare-meteorite

David Hall, who was exploring the Maryborough Regional Park near Melbourne, Australia in 2015. While exploring with a metal detector, I find very heavy reddish rocks covered with yellow clay.

The rock I found is the right picture below. It has a reddish color like rusty metal as a whole, and you can see something like yellow clay when you look near it. Hall took the rock he found home to his house and was thinking that a gold block might be hiding in the rock. The reason is simple: Maryborough was included in the area of the

Gold Rush that took place in Victoria, Australia in 1851.

Maryborough is located in Victoria, southeast of Australia, just a 3-hour drive from Melbourne.


Hall tried to break the found rock in order to prove that the rock he found was gold. He tried grinders, drills, strong acids, hammers, etc. but he could not break the rock.

Hall was interested in why the rock did not break and took it to the Melbourne Museum. Geologist Dermot Henry, who works at the Melbourne Museum, told the local media, Sydney Morning Herald, '(The meteorites discovered by Mr. Hall have a hazy appearance as if sculpted. When it passes through the atmosphere, it is a trace that can be melted outside, 'says that the rock that Mr. Hall discovered is a meteorite that came from outside the earth.

Henrys and geologists are investigating a number of self-proclaimed meteorites, 'I have been looking at a lot of rocks that people suspect that they are meteorites, and in most cases they have to tell it that it is an error. and if we do not ' speak in this way, the majority seems just a rock rather than a meteorite. However, the rock that Mr. Hall brought is an unmistakable meteor, which turned out to be of 4.6 billion years ago. Of the thousands of rocks that Mr. Henry has been working with at the Melbourne Museum for 37 years and said, 'Maybe it may be a meteorites', the ones that were truly meteorites are the ones that Mr. Hall brought in and another rock It seems that there are only 2 examples. 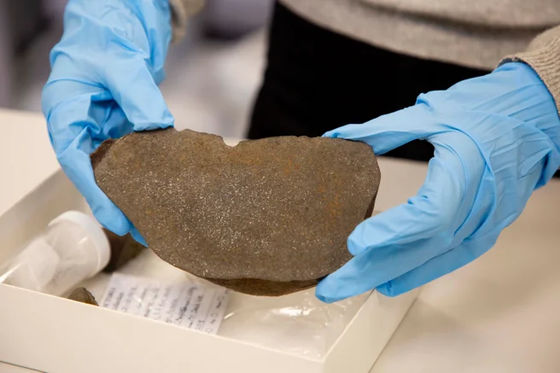 'If you pick up a rock on Earth, it's not as heavy (as Hall's rock),' said geologist Bill Birch, who also works at the Melbourne Museum.

scientific papers on the meteorites discovered by Mr. Hall. According to this paper, Mr. Hall's discovered meteorites weigh as much as 17 kg and measure 39 cm wide x 14 cm deep x 14 cm high. The inclusions include silicates, iron, nickel, magnesium, and a small amount of carbon and crystal water. It is a meteorite that has existed for 4.6 billion years, and it has been estimated that it has landed on the earth within 1000 years. It is H chondrite as classification, and it is with a meteorite with high ratio of iron. It is a stone that could not be broken with a hammer or drill, but researchers succeeded in cutting with a diamond saw. It has been found that some contain chondr rules .

Researchers have some speculations, although the exact numbers of where this meteorites came from and when they came on earth are unknown. The solar system in which the earth existed was once a collection of dust and chondrites, but these were gathered by gravity, and multiple planets were born. Those who failed to become planets at this time form a huge asteroid belt , and it is thought that some meteorites came from here.

Henry explains, 'A particular meteorite comes from the asteroid belt that exists between Mars and Jupiter. These meteorites repeatedly collide with one another, are reorientated by asteroids, and fly to Earth one day' doing. As a result of radiocarbon dating , it is estimated that meteorites were present on the earth for 100 to 1000 years, and in fact several meteors were observed between 1889 and 1951. It is.