What do the top programmers do? 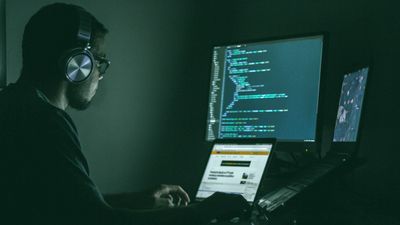 At what time of day does famous programmers work?
https://ivan.bessarabov.com/blog/famous-programmers-work-time

At what time of day does famous programmers work? Part 2. Workweek vs Weekend.
https://ivan.bessarabov.com/blog/famous-programmers-work-time-part-2-workweek-vs-weekend

A programmer's job is to write ' source code ', which is a blueprint for software and applications, by himself. The written source code will be backed up and shared with others by leveraging version control system (VCS). One of the most famous VCS, 'Git' has a specification that 'generates a time stamp' when saving source code. Bessarabov paid attention to the specification and investigated 'the time zone when famous programmers work'.

Below is a signature called a commit that is generated when you save your source code to Git. In the commit, the author of the source code, the author's email address, the save time, etc. are written, and it is easy to understand at a glance 'who wrote the source code'. The part enclosed in the red frame below represents the 'save time'. The storage time of this example is ``1563188141'', which is unclear at first glance, but this shows the number of seconds from 0:00:00 on January 1, 1970, and when translated into human language, it will be ``2019 07 It is 10:55:41 on the 15th of the month'. This survey will be an analysis of commit save times for top-notch programmers.

Linus Torvalds used in this survey. The 'hour' at the left end shows the time, and the horizontal bar graph in the center shows 'the amount worked at that time'. There are two horizontal bar graphs, 'Monday to Friday' and 'Saturday and Sunday,' which show weekday work and holiday work for famous programmers. 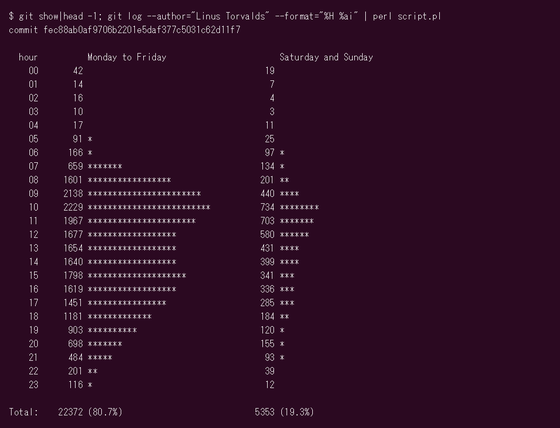 Mr. Torvalds' Git work hours are below. Similar to work related to Linux, I mainly work from 9:00 to 20:00, but the work volume on weekdays is 73.7%, and on holidays it is 26.3%. However, the amount of Git-related work is significantly smaller than that of Linux, so it may be within the margin of error. 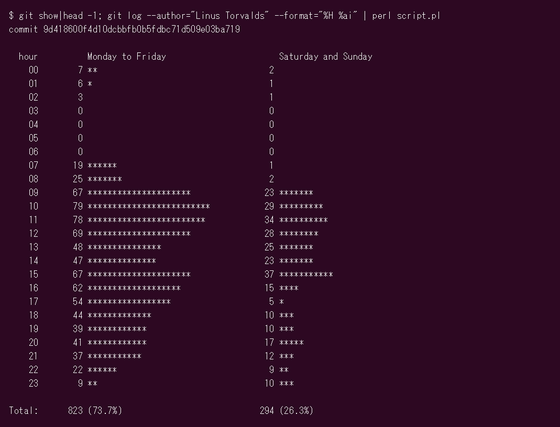 Sebastian Riedel, who created the famous web application frameworks Catalyst and Mojolicious , has the following working hours and you can see that he is working all day long. You can expect that you'll probably be sleeping between 4 and 13 o'clock, but it seems that you may be working. In addition, Riedel is working as much as on weekdays during holidays. Bessarabov writes, 'His work schedule is crazy, but its productivity is envious.' 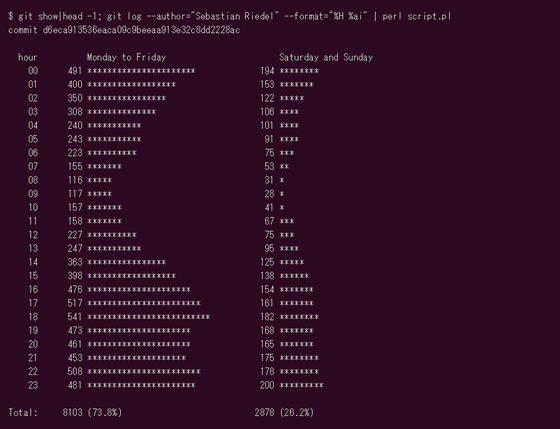 Chris Ratner is a super famous programmer who created the compiler board LLVM and the programming language Swift and sought out from super famous companies such as Tesla, Apple and Google. He seems to be a night type person who starts work at 16:00, takes a 2 hour break from 2 o'clock to 3 o'clock, spurts from 4 o'clock and finishes work at 6 o'clock, and takes a rest from 7 o'clock to 15 o'clock. .. Mr. Ratner also works on holidays as much as on weekdays. 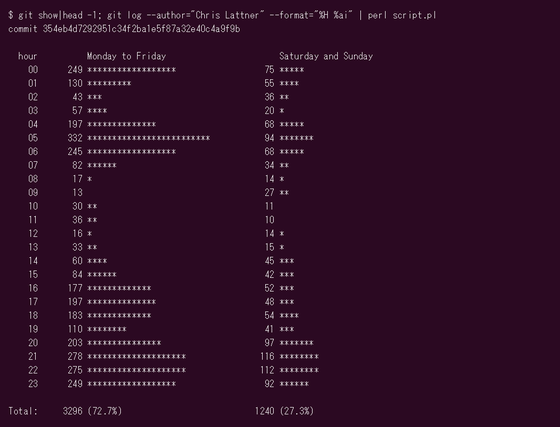 The working hours of

Rob Pike , the developer of Go language , are as follows. I'm sleeping from 0 to 6 o'clock, and I'm hardly working. Although I sometimes work overtime from 9 am to 5 pm and occasionally work overtime, the working hours are quite common. Also, 10% of the work on holidays is interrupted, and it seems that they work according to general work hours. 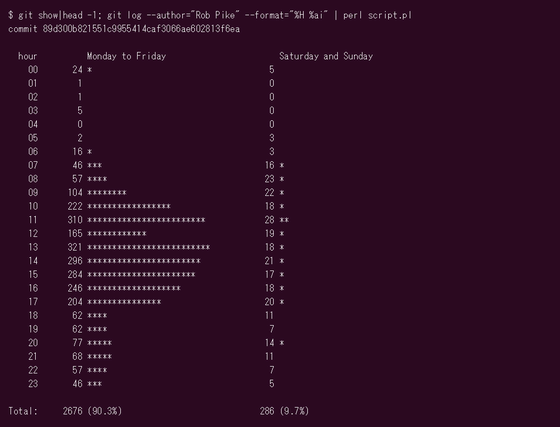 Brad Fitzpatrick, who created the SNS-like blog service LiveJournal at the age of 19, was living to sleep around 8 am during the creation of the open source memory cache system Memcached , and he was on holiday. .. 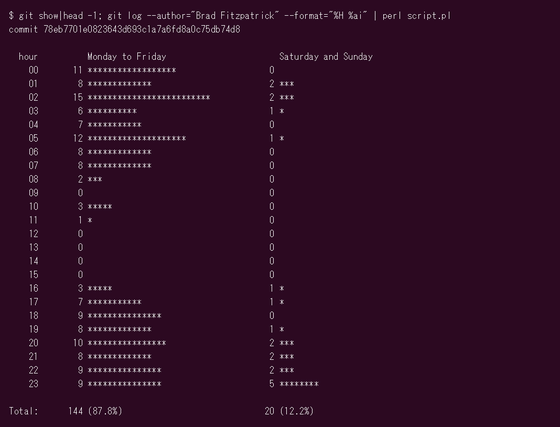 It seems that Mr. Fitzpatrick has recently started working as a member of Google's Go language development team, has come to rest from 23:00 to 7:00, and has returned to the general life of working from 9:00 to 19:00. There is no change in the point of taking a good rest on a holiday. 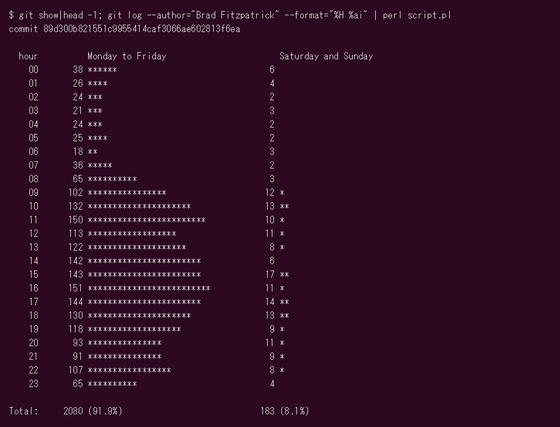 Rasmus Lardov, the creator of the programming language PHP , seems to be a person who works evenly all day long, but the peak of work seems to be from 16:00 to 23:00. 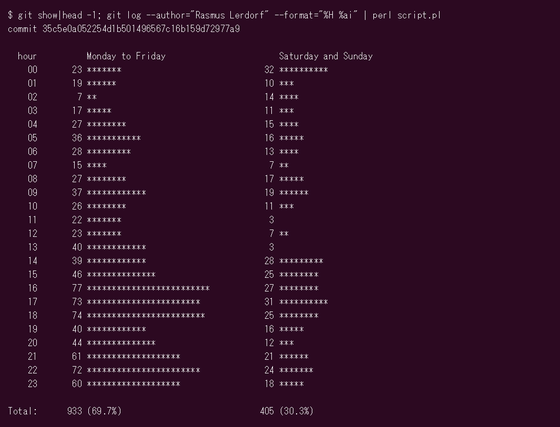 Guido Van Rossum, who was the creator of the general-purpose programming language Python and was called a gentle lifelong dictator for his leadership, works from 13:00 to 23:00 on weekdays and seems to take a good rest on holidays. 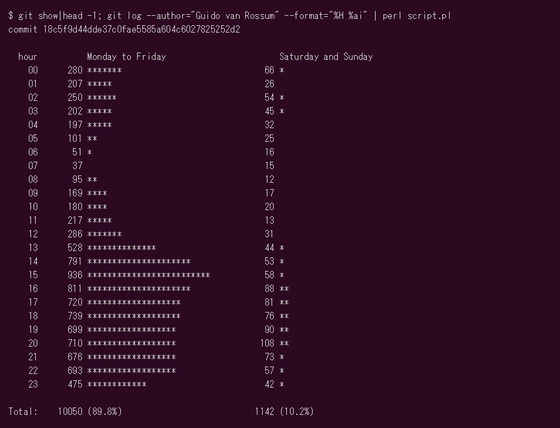 Fabrice Bellard, who created the free-source movie/audio playback software FFmpeg and the virtual machine emulator QEMU , is a person who sleeps or does not work from 1 to 8 o'clock. He seemed to work as much on holidays as on weekdays. It's easy to see that different top programmers have different hours of work. 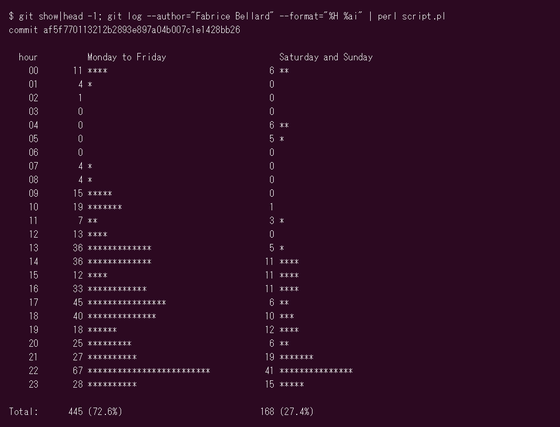