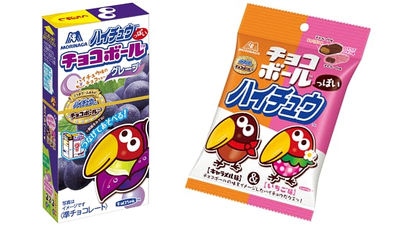 Morinaga Seika Co., Ltd. collaborated with 'chocoball' brand and 'highchu' brand, 'highchoy chocolate ball [grape]' (86 yen including tax) and 'chocoball like high chew' (138 yen including tax) 2019 7 It will be released on May 2 (Tuesday). It tastes as if they were replaced with each other, so it might be a bit confusing to check the taste.

A theory that even in a large universe, an intelligent life may be the only human being-GIGAZINE

I got a message card when I bought a Chinese product at Amazon, but everything seems to be a conspiracy because of the last sentence w pic.twitter.com/Ya7Z3Kg8qW

It is praised by cats and is despised pic.twitter.com/N0JPVWAqKW

At the bank I visited to transfer the tuition fee, a bill which slipped out of the envelope with empty money was sucked into a shredder machine that happened to be close to it and scattered. It is said that 'it may be replaced if it is put on the backing sheet as it was,' and that the jigsaw puzzle with the level of difficulty MAX has been overwhelmed. Someone comfort me pic.twitter.com/DkpNiWXWNR

I was a part-time job at Tennoji Zoo, but please also enjoy the miracle irresistible curry curry that the dispatch staff who came in single-shots created. pic.twitter.com/BXt3HzqTkW

This candy is packed for the first time in a great distance pic.twitter.com/R3VD2zEhck

The case is said to be one of the worst in history.
Is that STAP cell incident? I thought you It's totally wrong.
The Japanese researchers had caused a case such as STAP cell incident that was incomparably large. That is the case that happened to the late Mr. S, who was a professor at Motohirosaki University.

It is a story that is 40 to 50 years old, so it may be a story that middle to young earth science researchers including myself do not know. Although it is the negative history of earth science in Japan, I think that I want you to know it widely because it is fundamentally involved in the obstruction of this Cubanian registration.

* The image is an excerpt from the following https://t.co/KeU6LNKzLd pic.twitter.com/IzItpa1g5s

[Postscript] About some coverage about Imabari towel of NHK | ORUNET (Ornet)

We have confirmed that the company reported as 'a subcontracted factory where 28 Vietnamese people work' and 'work is sewing of towels' in this report is not a member of our association.
In addition, in this report, one union says that 'we will discuss in a union tomorrow' is considered to be a supervisory body (cooperative that performs acceptance) of foreign technical interns, and it is an organization different from our union. There is no direct contact between the company and the union.

'About 12 o'clock, when the chime rang and opened the front door, the detective was suddenly squeezed with both hands and pulled out.' What a matter of time, I resisted, but 'it's adult! Come to the station,' I was put on a police car surrounded by nearly 20 detectives.
Somehow I was up to the press, and while the camera shutter sound rang, my head became blank with panic. '

A simple method of pasting a T-shirt with a fabric printed with silk screen only one hand on a hand-painted ground pattern. https://t.co/deiaHxpnnK

When I stayed at the house where the cat is, 'Owner's morning ... ... another person! ! ! I'm astonished-> a story of a misplaced 'I have a face of identification'-Togetter

I received an email when I was rested and I got an email from the British teacher saying, 'Your body is private. You just have to leave the class for a break.'-Togetter

'The towel I received for the funeral was a Chinese product for a while, but now it is 100% made in Japan now. My mother said,' Made the towel for the Vietnamese training. It is famous for its raw labor in black, and it is a gift of slave labor that makes it possible to work late into the middle of the night and does not pay for overtime pay, and it is disliked to tell you that

I was attacked at the village of the home of the technical interns, but it is hard. Well, I'm going to come to Japan aiming for a one-shot reversal ... (and a room for fraudulent companies to emerge). pic.twitter.com/BSvrXmD5zG

Overseas people who came to Japan are surprised with high probability. pic.twitter.com/e4iKhCod0J

Uncle drinking a can of beer at the station's home, which seems to be after work. I used to think, 'Let's drink at home ...' but once I experienced it, I realized that I was enjoying 'a time when I was released from work and my family'. Every few minutes the train passes in front of you and watch it. It was a time of bliss

It is on Slack, and it is HISASHI's role to support AI by internal help desk work. Basically, 'someone in charge' in the company responded to questions and operations such as 'how to print', 'how to settle expenses', 'request for translation', etc. It takes time to solve it. He said, 'Because AI employees can respond automatically, let's be able to respond automatically!', HISASHI-kun was born and nurtured until it could be active as an employee.

Personally, although the fixed text of Ryo-Kun Gourmet does not fit on the skin, I use Ryo to automatically cut out only the contents with contents and post the account ( @TruthofGourmet ) and I laughed, so Ryo-Kun Gourmet It is transmitted only to hateful people https://t.co/sEtVt6l4ma pic.twitter.com/THB9WYwjX0

Y Generally speaking, MIDI data is in order from the start of the song
There is an absolute time axis like 1 second and 2 seconds elapsed.
BMS, on the other hand, calculates the number of divisions of a bar.
I feel relative.
And “It is important that you can freely change the denominator (the number that divides one bar).
Y It's novel, that's it.
Recently, MIDI has been called '2.0', and now it is called '1.0'.
It has been 30 years since MIDI. (MIDI 2.0 development reference article)
In 2.0, the resolution in a chunk (a set of data) is
It is said that it will be expanded to be specified individually,
Finally, 'Ichikura (MIDI) catches up with BMS' ...
(All laugh)
Y No ~ It took ~ time! ! 20 years!
C No-this is not a quote! !
Say 'This has been 20 years ago (] v [)'

How efficient is it to end vi with: wq or: q! or ZZ-the future of humans and the web

Recommendation (and Search) in Cookpad-Speaker Deck

An aerial shot of a drone that is only advanced in CG and games, and advanced in shooting technology.

I want to start a camera from now, but what kind of camera should I buy? The image to send to people is here pic.twitter.com/Ka6Xv2l6zC

Biome of the name distinction application of organisms and plants, feeling that the comment in the picture book is different from feeling that I thought it was so different and laughing with my husband pic.twitter.com/RhNrEDCh4C

There are several reasons to use ZZ to terminate vi. The first is that ZZ writes only the changed buffer and ends. If you don't change the buffer, ZZ will exit without doing anything. The file is not touched and no extra writing is done. The advantage of ZZ is that there is no need to manage such modify-flags. When using ZZ, it's a simple command that will perform the usual request quite commonly: 'If you want to save if there is a change, you don't want to touch if there is no change'.

The second reason is that ZZ is a vi command. Eh, what is wq? This is an ex command. When you press ':', you are in ex mode and it will not be executed until you press the return key. If you want to end vi, use ZZ. Unfortunately vi does not have a command to exit without writing a modified buffer, so in such cases you will use the ex command: q !.

The third reason is that ZZ can achieve the desired result with the minimum keystroke. ZZ is 2 strokes, but: wq is 4 strokes including return. A long time ago, there was a friend who lined up the reasoning saying 'Z is pressing the shift key, so it's a convenient 4 strokes, so let's make 3 strokes with a bonus,' but then 'NASA' is 5 letters. That's not true.

Now let's look at what the vim manual is like.

【TV animation second term production decision! ] In the 12th episode “final unity! Karutetto”, we announced the production decision for the second stage of TV anime!
What is the true identity of the 'transfer student' that Mr. Rozuwar introduced ? Please look forward to the 'petit' world that is still going on! ! # い る # different world karetteto pic.twitter.com/jOZMLAcGn3

I was asked by KADOKAWA for an illustration of a novel of 'Kemono Friends', but I had to wait for 2 and a half years for the unpaid work fee and finally I was paid only for the rough work fee 100,000 yen-Togetter

I have not been angry for the two and a half years I have been kept waiting for the work fee.
I don't really forgive that I had to report to my grandfather who died last year that there was no book. pic.twitter.com/q7UAFSKCe1

The quick solution when you are told that you are doing it because you are a friend pic.twitter.com/BUKRqzjY5U

I like that heroine lends her hand to makeover. pic.twitter.com/ClOHM9m1cR

I really didn't think I could do it ... pic.twitter.com/zXbskl34YL

I often look at recent students like this pic.twitter.com/w6PFCnrIy9

' # One Panman ' is the first home game!
[ONE PUNCH MAN A HERO NOBODY KNOWS (One-Punch Man Hero Nobody Knows)] Released!
The 3 vs 3 glow battle opens here-.
Don't miss information on the future! # PS 4 # XboxOne pic.twitter.com/k2Oewy4mDL

I see. 'SSSS.GRIDMAN' final episode This poster to the left of the last scene is this # w # promea # PROMARE pic.twitter.com/lMhejNgXy3

The impression that it has been a year and a half year since the maiden girl started (all are otomates ) pic.twitter.com/KAX9zjCAtN

Hokusai-chan who helped me at work. After all it is cute. .
I can have this Hokusai-chan in various ways.
Especially the cable of the smartphone is very good.
I can not fall on the floor anymore. (2nd)

※ It is not a manufacturer promotion. pic.twitter.com/0LerC48ukj

The mind of the chest 1 Lily # # Day of the lily pic.twitter.com/fzOz0oWZL0

I tried to paint a bunny Shoko. pic.twitter.com/AxjIhnLyDu

If the computer virus is a cat, a cartoon

We drew original cat cartoon for the first time, but it was fun ^ ^ pic.twitter.com/e2HjjZ2sND

The odor of this time # Today's little fish algae. Pic.twitter.com/pU6LBKeeia

It will be introduced in September! FEVER Mobile Suit Gundam Counterattack Char!

【Announcement】 I have drawn pin-up illustrations in the August issue of this month's Comic Amo August issue! Thank you in advance pic.twitter.com/CXDVo0F1IS

Sisters and sisters to meet off for the first time (again listed) # Lily of the day pic.twitter.com/fIEJjvEmu9

The dark business of Yoshimoto is a topic, but here please see the line that Kazuki Tsukasa, who was caught in baseball gambling, told the detective in interrogation pic.twitter.com/SY3FH6xPPr

I fished after a long time.
It was the first time in my life that I caught such a big tuna.
When I get excited I get this. Thank you for being laughable! pic.twitter.com/LYiVcUCdtv

# Masaki Sumiya You do not remember me, but as a part-time lecturer during Doshisha University, I was one of the teachers in your class. I was still a 20s page teacher. You attended every lecture, and on the back of the attendance table, wrote carefully what you thought of listening to the lecture of the day.

Keanu Reeves 'Sadness and a sense of loss never disappear. I'm always by my side.'

[Sad news] The entertainer, had a frustration of no gallery: Nanji great stadium @ what J summary

What a J PRIDE: [Sad news] Toru Hotaruhara, someone will lose his right arm