What is the reason why the world's largest waterfall with a head close to the altitude of Mt. Fuji is hardly known? 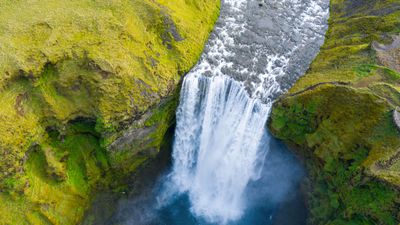 Speaking of 'the world's largest waterfall', of South America north with the largest drop world of 979m Guiana Shield is in the ' Angel Falls or', spanning between Argentina and Brazil with a width of the world's largest of about 4km ' Iguazu The waterfall is known. However, the “World's Largest Waterfall” is located at the bottom of the sea, and its size is different from that of the US Ocean Atmosphere Agency .

Where is Earth's Largest Waterfall?
https://oceanservice.noaa.gov/facts/largest-waterfall.html 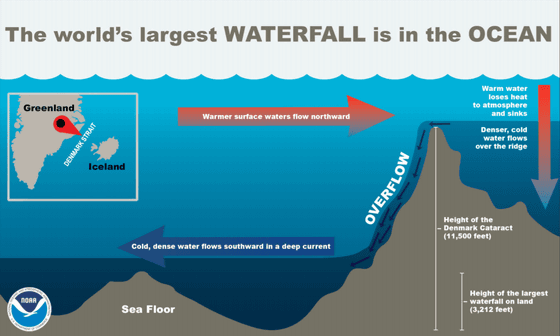 Waterfalls that people usually see are created by the fall of water due to gravity. On the other hand, waterfalls in the sea are caused by differences in water temperature, the US Ocean Atmosphere Agency says. Because cold seawater is denser and heavier than warm seawater, cold seawater flows down to the bottom of the ocean. Cold water flowing from the north side and warm water flowing from the south side meet, and the downward flow of water is generated, and the amount of water far exceeding 35 million cubic meters per second is pushed downward and becomes a 'waterfall'. .

This true world's largest waterfall is located in the Danish Strait, between Iceland and Greenland, and it seems that people can not see it.