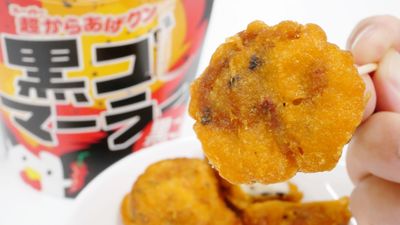 A new item from ' Super ' is added to Lawson's 'Karagekun' series. Not only does the super fried chicken use domestic chicken, but with new technology it is possible to put ingredients inside. As ' super-fried chicken with black sesame flavor ' that can directly sense the spicy sweetness from May 21st, 2019 (Tuesday) has appeared, May 7 (Tuesday) Arabiki pepper on sale will be crisp I tried to eat it along with the ' super-fried chicken with raspberry peppery taste ' that brings out the taste and aroma. At the top of the entrance, it was advertised as '100% domestic chicken was super fried chicken!' 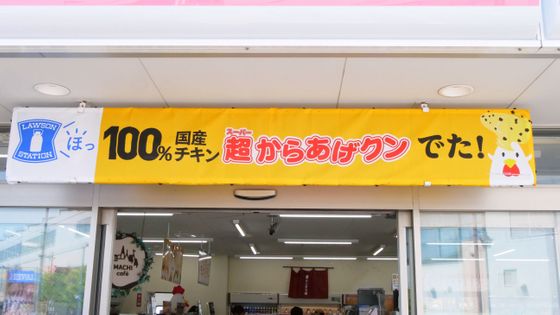 Discover the purpose of super-raising Kun in the showcase next to the cash register. So I bought it and brought it home. 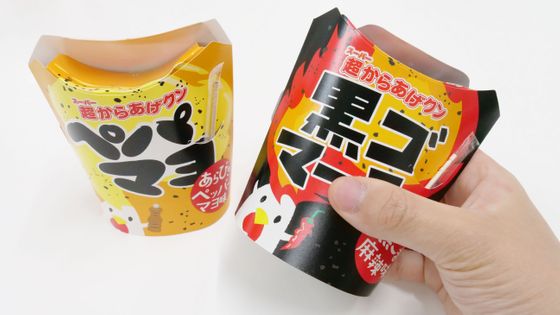 First of all, I will try it from ' Super-fried chicken with black sesame flavor ' (tax-included 240 yen). It is a package illustration that Tosaka of the mascot character 'Takaagekun' of chicken is greatly burned up. 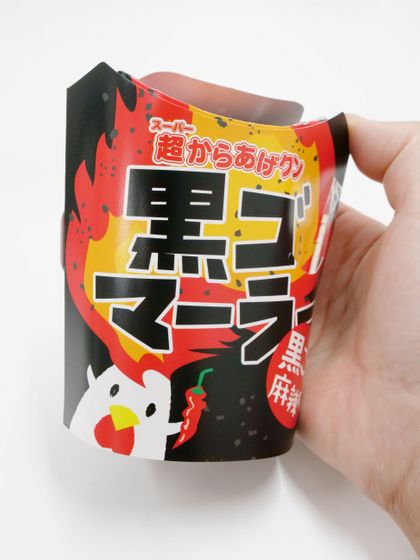 It is a menu that mixes chili pepper, 'Hanayama mochi', and 'Black sesame' in the deep-fried tofu-kun.

According to official information , calories are 239 kcal per package. 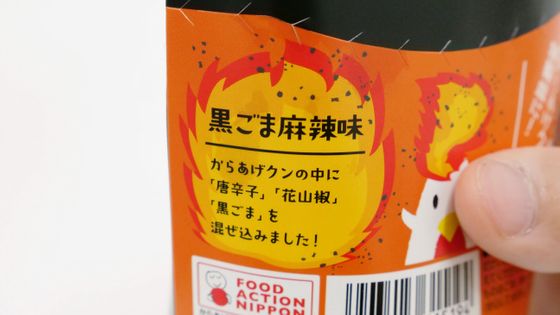 On the back of the package was written, 'Open it from here and pick it up in a special dish!' And it had an opening. Open Periphery from 'OPEN' part. 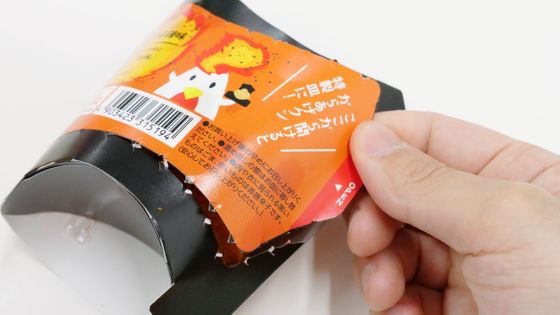 In such a feeling, it is a package that is easy to take out the contents. 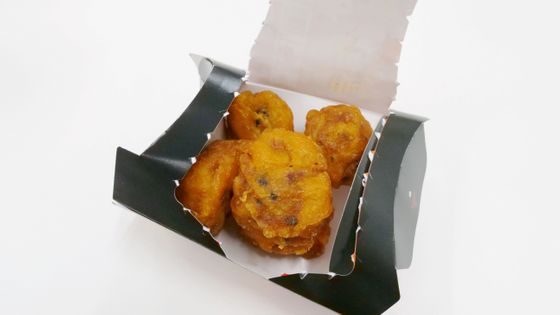 The appearance of the black sesame sesame flavor is a very deep fried color. 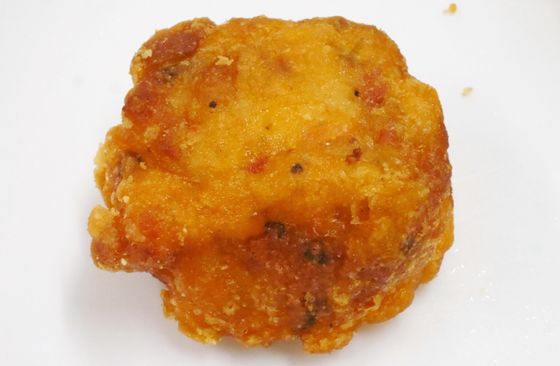 When I cut it in half and looked inside, I could see black sesame and red pepper respectively. 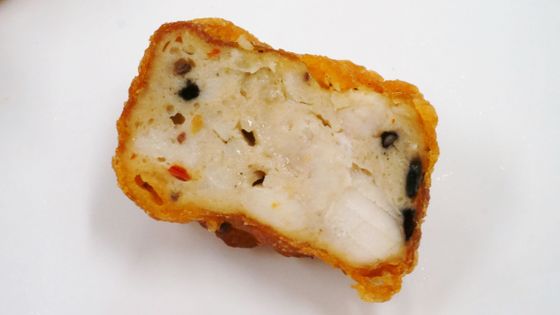 When I try to eat, I feel the taste of yam so that it overwhelms the original chicken taste. On the other hand, it is hard to feel about pepper, and the degree of hotness is 'slightly weaker than spicy'. Black sesame lost to yam, and I did not know whether it was in or not. 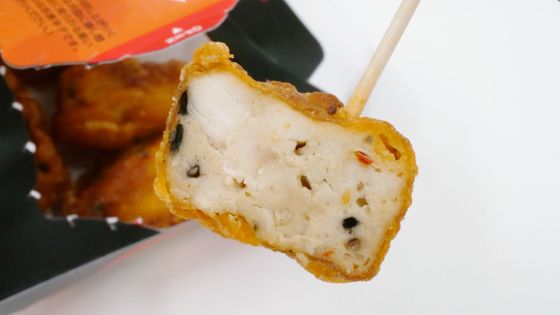 Next, I will eat the ' super-fried kun raspberry peppery taste ' (240 yen including tax). It is a package illustration where Tosaka of Togashika of the character's fried chicken becomes mayonnaise color, and pepper is sprinkled further. 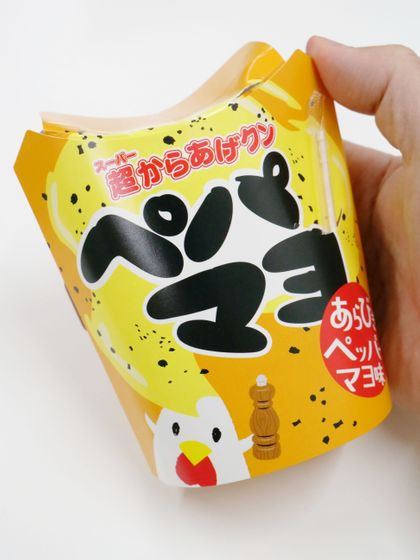 official information , the calories were 254 kcal per package. Also, as with black sesame flavor, the back of the package had an opening. 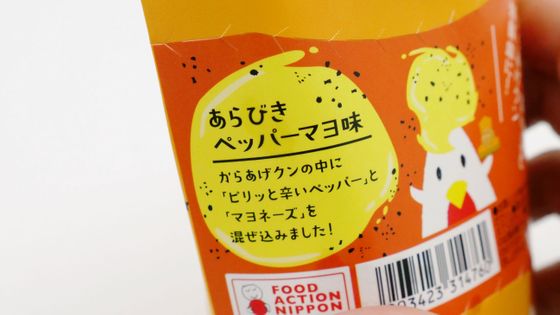 The super fried pepper mayo taste has a beautiful, fox-colored appearance, and it has a lot of black pepper on the clothes. 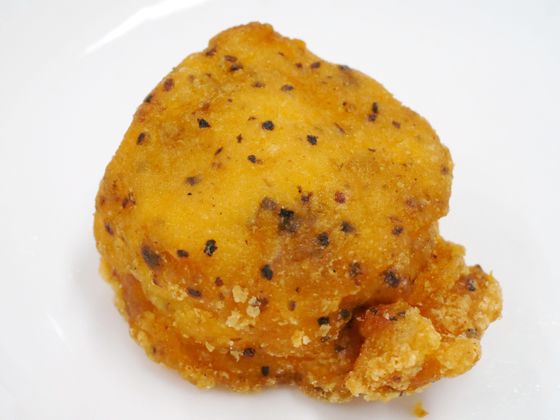 When you cut it and look inside, mayonnaise is caught in between. Thanks to the new technology, it is now possible to put ingredients between Kamaagekun. 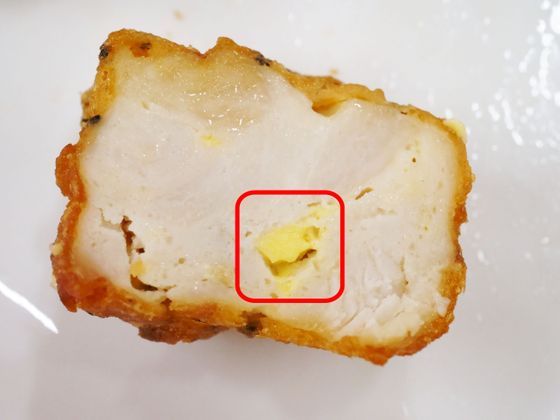 When eaten, the flavor of black pepper explodes and adds intense spicy to the taste of chicken. The taste of mayonnaise, on the other hand, was quite modest, hiding in the black pepper. 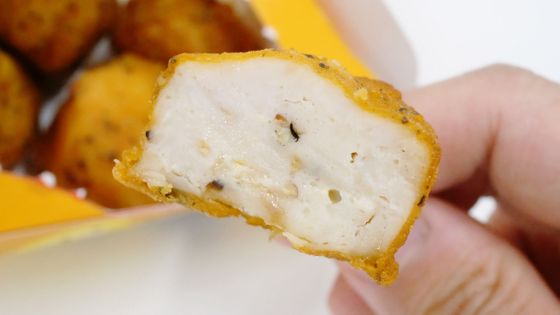