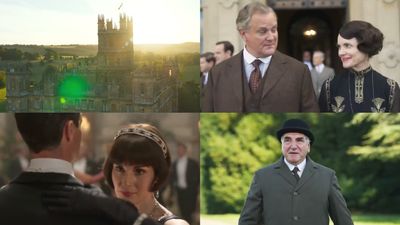 Downton Abbey ' is a drama covering the life of the Grantham family and their servants in the Yorkshire Country House 'Downton Abbey'. It gained popularity all over the world. The Downton Abbey, a movie version of the Downton Abbey after the final season, is scheduled to be released in 2019, and the latest trailer is available on YouTube.


The destination of a woman driving a car is ...

Downton Abbey where the Grantham family and servants live.

In the mansion where the magnificent decoration attracts attention ...

Many servants are working.

The drama version depicts how the life of the nobles changes dramatically according to the trend of the times, but Downton Abbey retains its formidable power even in 1927, which is the stage of the film.

Eiji, second daughter of the family, played by

We will have a kiss for the reunion with Mrs. Cola (played by

From the car, Edis's husband, Bertie (

department : Harry Hadden-Payton ) will also get off.

Children playing in the garden.

The family and servants who spend their favorite days, one letter shakes Downton Abbey.

The late boy Andy (played by

Michael C. Fox ) seems to be upset by the letter.

'The king and the queen will come to Downton,' says

The servants will arrange a system to meet the king and queen in full.

We also need to have a large dinner ...

With Downton Abbey standing up, Mary went to a small house.

Mary complained that 'you need your help' ...

Carson who answered 'don't worry, young lady' to Mary who complained that Carson's power is necessary to settle the situation .......

I will return to Downton Abbey again.

To the people of the samurai who show a smile ...

Thomas exchanges a kiss with a servant.

Can Downton Abbey be able to safely meet the king and queen?

One car stops in front of Downton Abbey.

To the person who came down from inside ...

The movie version “Downton Abbey” will be on September 20, 2019 (Fri), and will not be released in Japan at the time of writing.