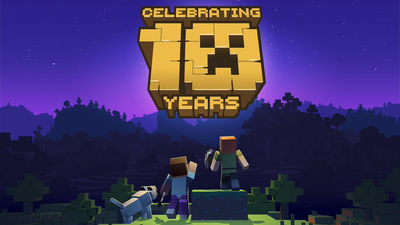 Minecraft, which celebrates its 10th anniversary on May 17, 2019, has announced Minecraft Classic, which allows you to enjoy the original version of the game 10 years ago.

Embrace the Past with Minecraft Classic | Minecraft
https://www.minecraft.net/ja-jp/article/embrace-past-minecraft-classic

Minecraft is a game that you can play freely while building, growing and exploring crops in a blocky world. Not only the cumulative sales number has surpassed 144 million as of 2018, but the Danish government reproduces the land with 4 trillion pieces and 1 TB super large works, and the school where the Meincraft is a compulsory subject in Sweden It is a title that continues to have an impact on the world beyond the scope of the game, as it has appeared , and it has become clear that it is effective for autism and ADHD .

It was in 2009 that such Minecraft first appeared. At the beginning of the release there were only 32 blocks, and there was no Battle Royale mode or even a craft system. You can play the rough initial version Minecraft that appeared about 10 years ago, 'Minecraft Classic' has appeared. It seems that there were multiple bugs at the beginning of the release, but all of them were faithfully reproduced.

'Minecraft Classic' is playable for free on your web browser, and you can operate it surprisingly surprisingly with multiple tabs open. In addition, in order to commemorate the 10th anniversary, Minecraft has published a chronology that looks back over the past 10 years on the official site ...... 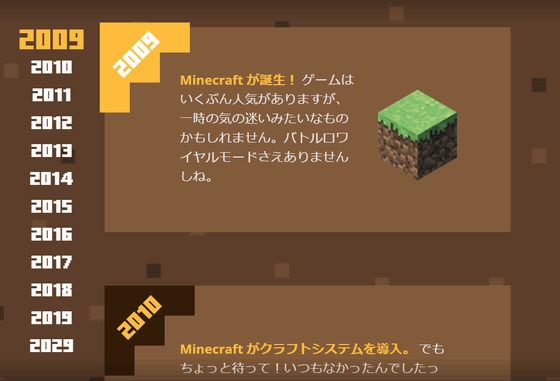 We are looking for memories about Minecraft on the hashtag '#MinecraftMemories' to commemorate the 10th anniversary.

10 years of Minecraft-that's a lot of mining! While it was completing a house or joining your first server, we're sure you've got a few good memories over the years. Share your favorite story with us, using #MinecraftMemories

In addition, Microsoft has released a movie that sends Minecraft AR version, and the details will be announced on May 17.