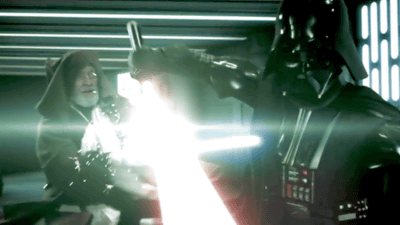 Star Wars Episode 4 / New Hope ' published in 1977 will be fighting with the latest video technology while complementing it with an image based on those days. Star Wars fan, FXitinPost , released on May 8, 2019, a movie ' Star Wars SC 38 Reimagined ' that was boldly remade using camera work. As of the time of article creation, the number of views has already reached so much that it has exceeded 1 million times.

Large Space fortress of the Galactic Empire, which floats on the planet Alderaan the air region

Darth Vader walks among them.

Obi-Wan, who is trying to escape from the Imperial Army's guard but ...

I grabbed the light saver if I knew something.

At the end of Obi-One, Darth Vader stands with his red Lightsaber.

Two people of the relation which mutually relate to each other.

And the fire pig of the battle was cut off. The blades of the lightsaber hit each other, and intense sparks splattered. It's such a fierce battle that the walls and floors are cut.

Darth Vader cuts in without hesitation to the former teacher Obi-One.

Soles is a distinctive bow-like model, and it is the Obi-One's best-of-breed strategy not seen in Episode 4 / New Hope.

Darth Vader uses a force to dump the cargo placed in the hallway into Obi-Wan at a tremendous speed, but Obi-Wan cuts off the cargo in retrospect.

With a cut from the bottom and a light saver with all the power on with the light on, such as Darth Vader, the fight between the two is depicted in a contemporary composition and direction not seen in 'Episode 4 / New Hope'.

Darth Vader blows off Obi-One with Force, seeing the opportunity to break with Lightsaber.

Obi-One hit on the wall.

Obi = I will throw it away.

Lightsaber did not hit Obi-Wan, but stabbed just beside his face.

At the same time, Luke Skywalker and Princess Leia rushed to the Millennium Falcon, which was seized to escape from Death Star.

Hatch opens to the hangar where the Millennium Falcon will be stationed, and the battles of Obi-Wan and Darth Vader, who had once been part of the master-labor relationship, will also be found in the Imperial Army soldiers.

However, Obi-Wan shows a fierce battle with Darth Vader without even being aware of being found by the Imperial Army soldiers.

The Jedi Master, who has been active in many battles, is still alive, and Obi-Wan shows a beautiful sword that is not reminiscent of his old age.

I try to blow off Darth Vader with force when I see a chance ...

Darth Vader who can stand beautifully.

Darth Vader's mask is illuminated with the red light of the Lightsaber. Jedi's fortified to be the strongest ever, his strength is still alive even if he falls to the dark side, and even Obi-Wan, who was the master, struggles.

Obi-Wan, who thought that “If Luk continues to escape, Luke's chance to escape is lost,” Obi-Wan decided to defeat Dare.

When Darth Vader knocks Obi-One down ...

The body of Obi-Wan who united with the Force with death disappeared as a spiritual body.

Darth Vader shows a sense of feeling to a young man who witnessed the death fight with Obi-Wan.

Scene 38, the battle between Obi-One and Darth Vader, is a short scene of just under 2 minutes in 'Episode 4 / New Hope'. However, such a scene 38 volume up to 6 minutes in total length. Since it is remade based on the image at that time, Alec Guinness 's face is synthesized to Obi-One showing intense action, but there is no sense of incongruity at all. Furthermore, a dynamic killing team that evokes the two young fights depicted in ' Episode 3 / Revenge of the Sith ' is depicted with powerful camera work and rendition. Is it suspicious? Please check the movie with your own eyes and watch over the two death battles.