Darvish has knocked down a batter, catcher and referee with only one ball 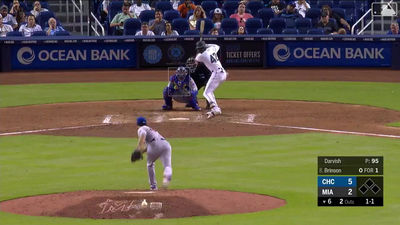 The MLB 's official video corner covers the fact that a Darvish player from MLB 's Chicago Cubs has made a batter, catcher, and referee hit a ball with just one ball.

The scene in question is as follows. I tweeted the movie is the Twitter account of Cut4 which is the official video corner of MLB.

Yu Darvish throws the most devastating fastball of his career. Pic.twitter.com/sicvVLhnUL

The thing happened was the scene where Lewis Brinson stood in the batter's box six times back two outs. The ball thrown by Darvish players is turning from the strike zone to the right ... Hit Brinson's crotch with his hips, but he seems to have hit the left thigh. Then the bouncing ball bounces the catcher Wilson Contreras and Brian Onora referee's face, and a solid sound of 'Katsun' sounds. The ball was hit near the Nora of the Onora referee, and he hit Contreras's back. In the lower right red frame part, 99 MPH (about 159 km / hr) was displayed. All players, including Darvish, are wearing uniforms with a No. 42, as it was Jackie Robinson Day, which celebrates the day that Black's first big leaguer Jackie Robinson played is. 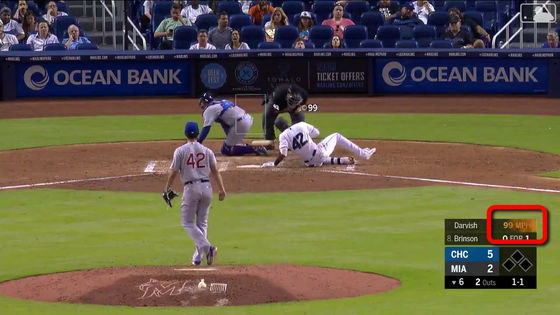 Seeing this one ball in slow motion is as follows.

Mashable of the foreign media states that 'I can not do the same thing again even if I practice for decades.'

One ball that hit three players with Darvish attracted a lot of attention overseas, and Yahoo Sports in the United States said, 'Darbish had a ball that hit every member of the batter, referee, and catcher unexpectedly.'

Yu Darvish managed to hit the batter, umpire, and catcher all in one pitch ????

'Sports 99 mphs of Darvish's tossed off batter, catcher and referee,' Sports Illustrated, the most popular sports weekly magazine in the United States, tweeted.

This 99 MPH fastball from Yu Darvish took out the batter, his catcher and the ump ????


·bonus
It is a rare event that a deadball that hit a batter hit an umpire or a catcher, but it seems to happen once in a few years, and some other examples have been reported, and official images are left There are also some.


A ball thrown by Nationals pitcher Steven Strasberg at the Philadelphia Phillies-Washington Nationals match on September 13, 2018 held the arms of Batter's Holfe Alfaro We hit the catcher's mask of catcher Matt Waters, and finally hit the referee's mask.


In Japan, the ball thrown by pitcher Jason Stanridge at the Softbank Hawks vs. Rakuten Eagles match on May 10, 2015, the batter Willie Moe Peña, Taisei Sugimoto referee, catcher Tsuruoka Shinya has hit directly.