India's first domestic microprocessor 'AJIT' appeared, will it be a step towards the birth of a new electronic powerhouse? 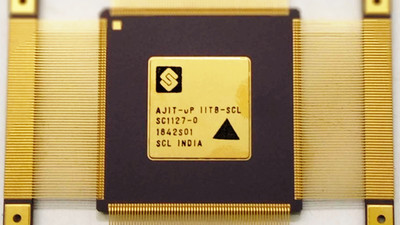 The Indian electronics market has achieved unprecedented growth, and is expected to

reach $ 400 billion by 2020. Under these circumstances, researchers at the Indian Institute of Technology, Mumbai, developed the first microprocessor designed and manufactured in India ' AJIT '.

Welcome AJIT, a 'Made in India' Microprocessor | Research Matters
https://researchmatters.in/news/welcome-ajit-%E2%80%98made-india%E2%80%99-microprocessor

A microprocessor is an integrated circuit that contains millions of transistors fused into a semiconductor chip. Although only a few millimeters in size, it is used in most electronic devices, from household appliances such as microwave ovens and washing machines to supercomputers mounted on space stations. However, microprocessor development and manufacturing require significant investment and know-how. As a result, microprocessors can only be manufactured and sold by limited companies worldwide. Therefore, although India has shown the top development in the world in terms of software, it has not yet caught up with other countries in terms of hardware.

The 32-bit microprocessor 'AJIT', developed by a research team at the Indian Institute of Technology, Mumbai, in a government-owned semiconductor research institute, is the first pure Indian processor to operate at clock frequencies of 70-120 MHz. A unit that can perform basic arithmetic and logical operations such as addition, subtraction, and comparison, and a memory management unit for storing and retrieving data from memory are included. It also has a floating point unit designed to handle decimal calculations efficiently, and a hardware debugger unit to assist supervisory control for programming microprocessors. AJIT is a smaller processor than Intel's Xeon series, but it can also be applied to factory automation systems, signal control panels, or robot system construction. Researchers at the Indian Institute of Technology Mumbai expect that if AJIT is mass produced it will cost less than 100 rupees per unit (about 160 yen).

Leading the research team, Professor Madhav P. Desai, stated, “The first step is to manufacture with the 180 nm process. This is not a state-of-the-art technology, but it is sufficient for most of the targeted applications.” Has announced that it plans to move to the 65nm process and to commercialize processors with more advanced technology. In addition, one of AJIT's designers announced at the overseas bulletin board site Reddit, '

We are planning to use AJIT for the NavIC navigation satellite system and its satellites.'