How are manufacturing plants responding to the rapidly increasing demand for semiconductors? 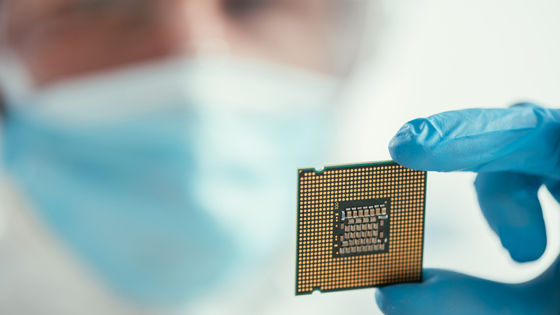 Semiconductors are components used as the brains of many electronic devices, from electric toothbrushes to game consoles and automobiles. Semiconductor demand of the world continues to grow year by year, the World Semiconductor Trade Statistics (WSTS), the semiconductor market growth rate from 6.8% in 2020, in 2022 shall be increased to 28.5%

prediction was. The Washington Post, an overseas newspaper, introduces efforts to manufacture semiconductors, which are in tight demand.

The most important and expensive machine in the factory is the lithography machine that performs exposure, and its price is 100 million dollars (about 11 billion yen). 'When a machine breaks down, it's important to have it repaired quickly,' said Peter Bennion, general manager at one of GlobalFoundries' factories. The quicker the machine is repaired, the more chips the factory can produce. When GlobalFoundries' lithography machine broke down in 2020, the technicians of the usually dispatched lithography machine manufacturer could not come due to concerns about the new coronavirus infection, and the factory was equipped with an AR (Augmented Reality) headset. The technician repaired it directly under the guidance of.

However, the most effective way to dramatically increase production is to build a new factory. According to SEMI , a global semiconductor industry group, construction of 29 new factories is scheduled to begin by 2022. The breakdown is 8 in China and 8 in Taiwan, 6 in the United States, 3 in Europe and the Middle East, and 2 in Japan and South Korea. However, Christopher Belfi, who is in charge of machine repair and system management at GlobalFoundries, said, 'One of the difficulties is to secure a skilled person.' Mr. Belfi himself has a degree in technology from the State University of New York at Albany and has a hobby of robot engineering, but there are not many universities that offer a curriculum focused on semiconductor manufacturing, and his colleagues are former auto mechanics and Former air force mechanic and others said they lacked specialized knowledge. GlobalFoundries is providing two years of on-the-job training to ungraduated employees and working with community colleges to help design a tip-related curriculum.