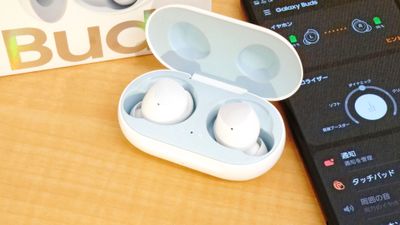 Samsung has announced the wireless earphone ' Galaxy Buds '. Galaxy Buds is an earphone that aims at 'comfort to be added all day' using technology of the prestigious acoustic product brand

AKG , which became affiliated with Samsung in 2016, and has become a product that rivals Apple's AirPods. It is said that The release in Japan was at the end of May 2019, but since I could borrow it prior to the release in Japan, I actually reviewed it.

The package of Galaxy Buds looks like this. The letters 'Buds' are iridescent when reflecting light. By the way, 'Bud' means flower 'bud'. 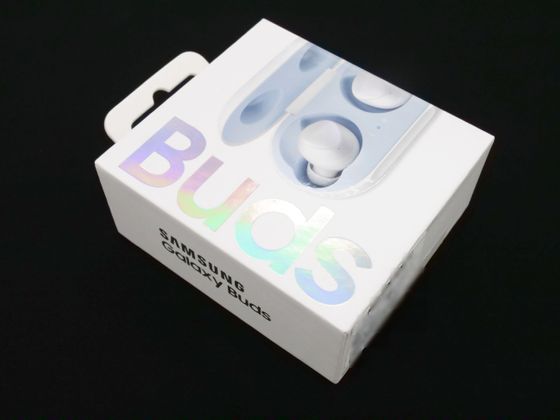 AKG, which has released professional-type audio devices that are also used in recording studios, is involved in the development and says, 'Providing the same sound experience as AKG products.' 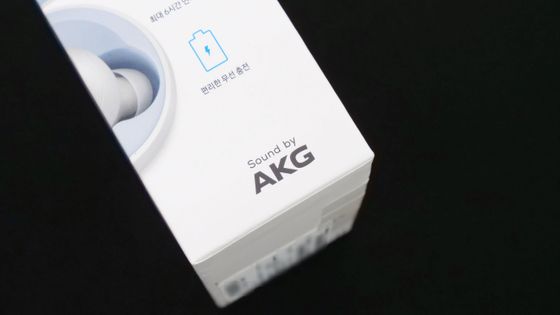 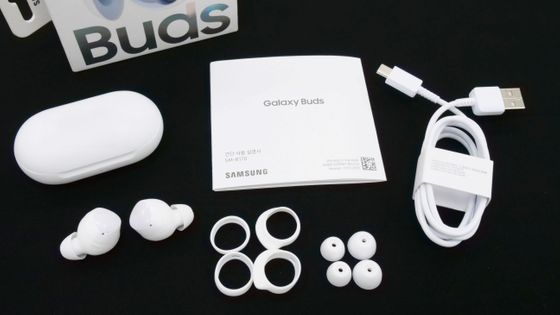 The Galaxy Buds body looks like this. Galaxy Buds is a canal type wireless earphone with independent type on the left and right sides, and its size is quite small, 17.5 mm wide x 19.4 mm deep x 22.3 mm high. 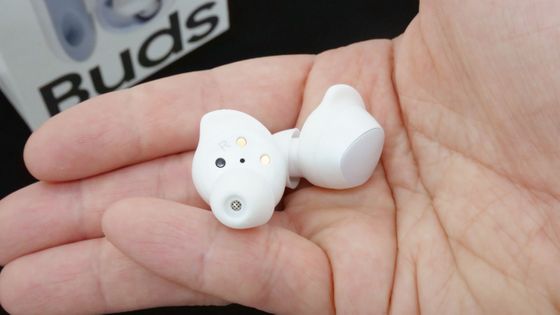 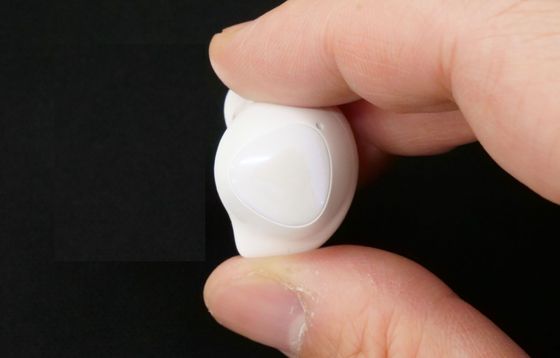 The microphone is equipped not only in the part to put in the ear but also at the bottom of the button on the side of the main unit, and is installed in two places. Galaxy Buds has built in a system called 'Adaptive Dual Microphone' that automatically uses two microphones according to the surrounding conditions such as noise and quietness. 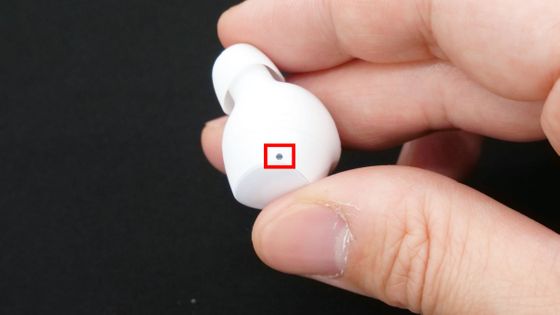 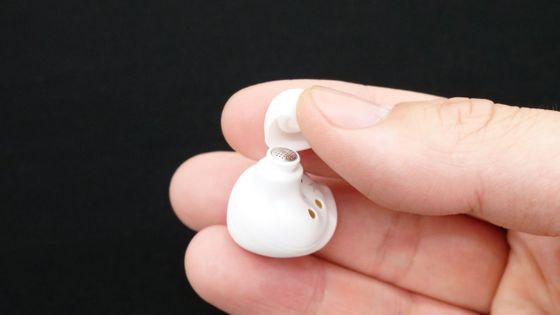 When you try to put it on, though it is not enough to forget that you are wearing it, the weight and the feeling of wearing will not give you a sense of discomfort. As it fits perfectly like earplugs, it does not come off even if you shake your neck, and the sound insulation is high. 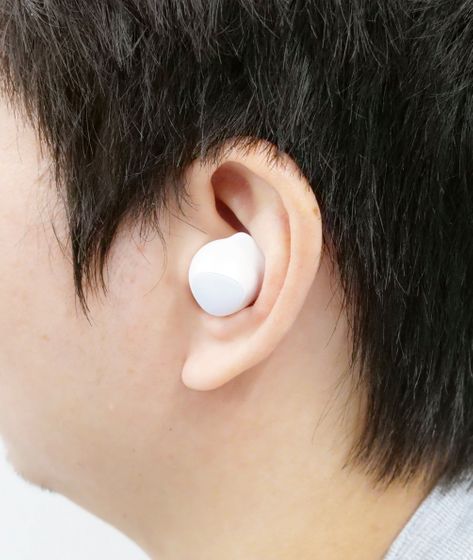 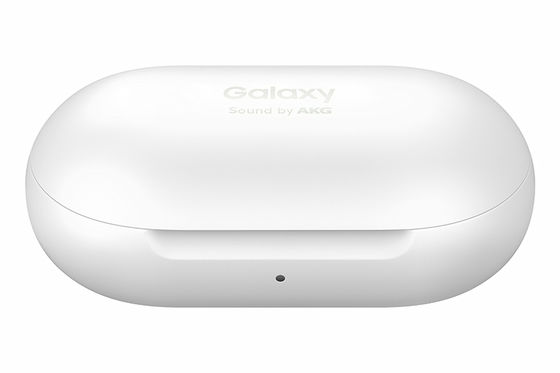 When viewed from the side, it has an oval shape and is somewhat thick. 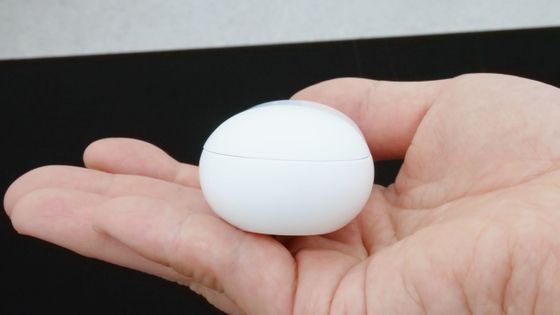 There is a USB Type-C port on the back. 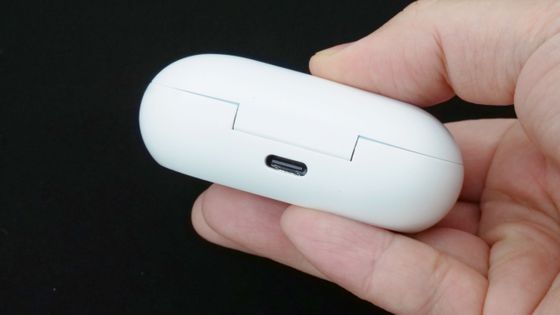 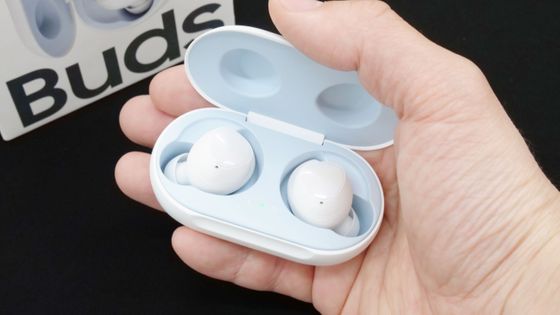 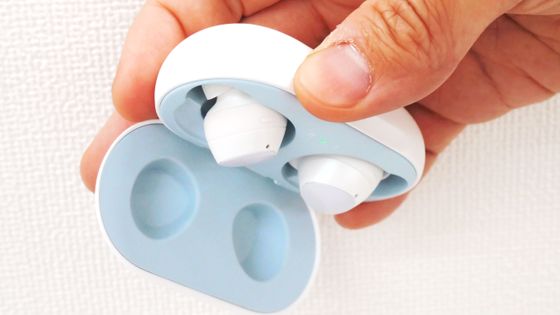 The total weight of the case and the Galaxy Buds body is 51 grams by measurement. 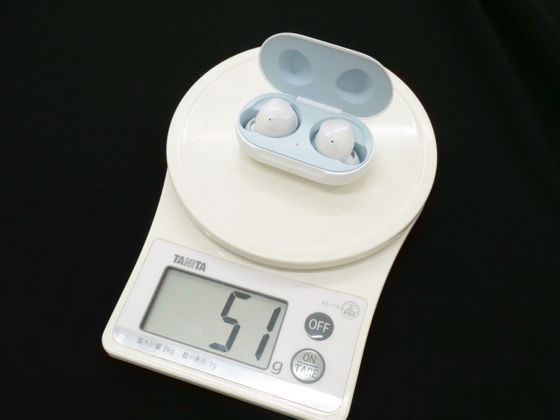 Only the Galaxy Buds main unit was 11 grams in total. 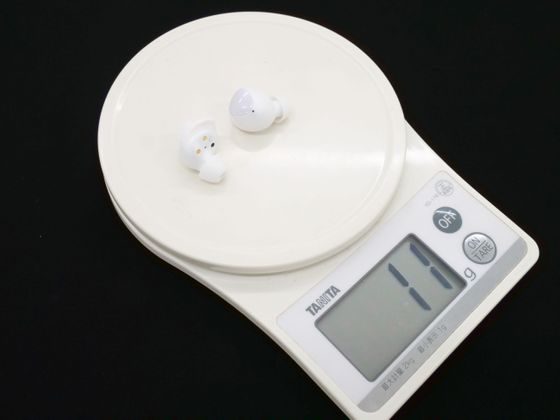 The Galaxy Buds can also be charged by plugging the included cable into the USB Type-C port on the back of the case, but supports

Qi standard wireless powering and utilizes 'Wireless Power Share' such as Galaxy S10 If you do, you can also charge Galaxy Buds from your smartphone. 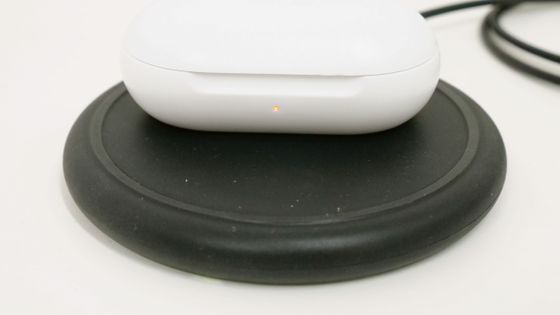 It is possible to use only with Bluetooth connection, but try using it because it is that various functions can be used by utilizing Android application 'Galaxy Wearable'. At the time of article publication, because Galaxy Buds does not have a dedicated application for iOS, what you can do when using Galaxy Buds on the iPhone is 'Play / Pause' with a single tap on the side of the main unit, double tap with a double tap. The basic operations are 'play next song', 'play previous song' with triple tap, and 'launch Siri' with long press. 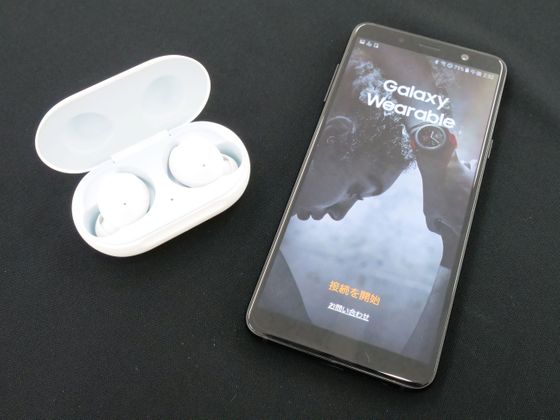 You can download Galaxy Wearable from the link below.

This time, we will connect Galaxy Buds, so select “Galaxy Buds”.

Tap 'OK' to allow you to use location information when searching for nearby devices using Bluetooth.

If you open the lid of the Galaxy Buds case or take out the main unit, Galaxy Buds will be displayed on the “Nearby device”, so tap it to select it.

In order to use the Galaxy Wearable app, you need to agree to the End User License Agreement, so tap 'Agree'.

Select the application that sends notifications to Galaxy Buds and tap Next.

Finally the tutorial is displayed. The installation is complete when you press 'Done'.

This is the home of Galaxy Buds operation screen of Galaxy Wearable. The item “earphones” shows the battery level of the Galaxy Buds.

In the 'Equalizer', you can adjust the sound quality by selecting one of five presets: 'Bass Booster', 'Soft', 'Dynamic', 'Clear' and 'Treating Booster'.

You can use the touch pad to make settings for the side buttons on the main unit. Single-tap 'play / pause', double-tap 'play next song, answer / end phone', triple-tap 'play previous song'.

'Ambient sound' is a mode that allows you to hear the surrounding sound even through the earphones. If you turn it on, people's voices seem dull, but footsteps and so on will be amplified. Also, be aware that turning on 'Ambient Voice' does not mean that you will hear all the ambient sounds while listening to music.

In 'Earphone remote tracking', when the Galaxy Buds body is dropped, etc., it is a function that makes a sound out of the body and makes the position easy to understand.

You can see how the “Earphone Remote Tracking” is actually used in the following movie. When you start you can hear the sound of a bird's cry from the Galaxy Buds body and you can see clearly that it sounds even a few meters away.


When actually using it, the medium range is coming out firmly before, but the upper and lower sides are somewhat weak. In particular, the bass has an impression that the part that is supposed to be resounding is cut. This was a place where I could not cover even with the 'bass booster,' so if you've used an earphone that emphasizes deep bass, the sound may seem light.

It is quite good for wearing, very comfortable to wear like earplugs like canal type, and considerably higher fit. It is a sufficient impression that six hours of continuous use time without the case. With regard to button sensitivity, there are cases where the sensitivity is high enough that music will be played / paused in response to touch when the ear is aligned, while double taps and triple taps may not be recognized properly. was.