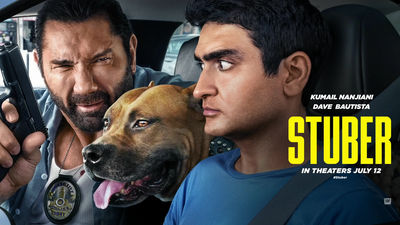 The action comedy film directed by

Michael Doss of FUBAR and directed by Tripper Clancy is Stuber . Dispatch service · Uber 's driver is a buddy who solves the incident by forming a tag with a detective who has got into the vehicle wildly, and it is the comedian Kmail Nanjani who plays the main character driver Stu, and the partner's vic The performer is pro-wrestler and actor Dave Bautista .

The screen shows a strong man saying 'pick up here'. Apparently a man driving a car looks like the main character, Sutu, and utters, 'Please, give me a star 5 rating ...'.

While traveling by car to the instructed location, a man suddenly striking the front of the running car appears ...

Stu is also this expression.

It's like Vic who plays Bautista on this strong side that got in.

Show off the police notebook ...

Vic is pressing for cooperation in the investigation. It is a development that is likely to be a movie or drama, but in this work the point is that the driver is “Uber's driver”.

Stu suddenly stops the car despite the emergency (?).

Then two women got in. Apparently, according to Uber's boarding function, it is like going to the destination with Vic.

But, of course, Vic is kicking out the women's couple because it's under investigation.

Get off the car and go to the investigation.

Secure suspects in a dynamic lariat.

Continue to accompany the car as it is ...

I will ask Stu to look over. As a precaution, I handed a pocket-sized hand gun, but I refused to accept it, saying 'The gun doesn't touch'.

Stu to be fooled by the arrested young man while waiting for Vick in the car.

I will trigger the handgun just about it.

Stew of expression that 'early!' More than a shot young man.

Boys and girls who look at the situation peacefully.

It's such an ordinary citizen who has nothing to do with guns and crimes, but can it help solve cases?

Not only comedy elements, but also car action (?) That uses the subject matter.

Even a flashy gunfight.

With good public people, can Vic protect the town's peace?

Natalie Morales plays Nicole, a woman who appears in the play.

Something Stu got in hand ...

I throw it out outside.

Vic shoots this with a shotgun.

Stu also has this look because he is at the center of a flashy car action like watching in a movie.

A person who kicks off a big body of Vic lightly also appears.

And dogs. In the trailer, it appears only in this one scene, but in

key visual you can see the figure between Stu and Vic, so it may play an important role.

Two people who clash and scream in the car. Pulled by Stu, Vic's reaction is also something cute.

Vic is inferior, but Stu who shows the expression 'I can not shoot it' just as I have never held a gun.

The trigger never triggers, but there is no bullet and only the sound of 'tick' sounds.

Involuntarily throw handgun, but it is easily caught ......

It is beautifully thrown back.

The last is a scene of desperate desperate being chased by bad guys.

The villain also laughs at this. The trailer is a good two people, but Stu will be able to successfully resolve the case and get a star 5 rating.

The 'Stuber' will be released on July 12, 2019, but the release date in Japan is undecided.