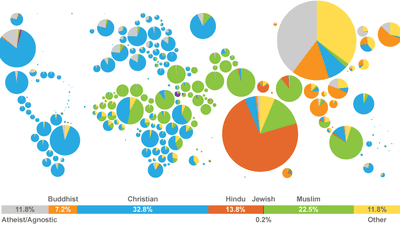 By arranging a pie chart showing the number and percentage of religious believers in countries around the world like a world map, an infographic showing the distribution of each religion and the percentage of believers in each country is disclosed in a single shot. It was created by Carrie Osgood , a designer who teaches communication design at the University of Colorado at Denver, and is based on data on the 2011 population worldwide and the 2010 religion.

These are all the worlds major religions in one map | World Economic Forum
https://www.weforum.org/agenda/2019/03/this-is-the-best-and-simplest-world-map-of-religions/

You can see the big picture by clicking the picture below. The lower bar shows the proportion of the number of believers in religions all over the world, and the color of the bar corresponds to the color of the pie chart on the map. The leftmost gray of the bar is 'atheism or agnostic ', next orange is 'buddhism', blue is 'Christian', dark orange is 'Hinduism', purple is 'Judaism', green is 'Islam 'Yellow' represents 'other'. 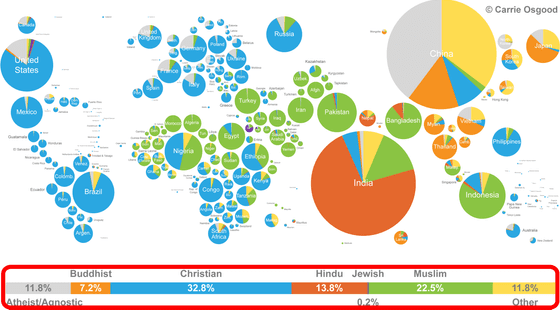 Looking at Japan, Buddhism is the most, followed by other religions, atheism, agnosticism, and Christianity. Shinto is classified as 'other religions'. 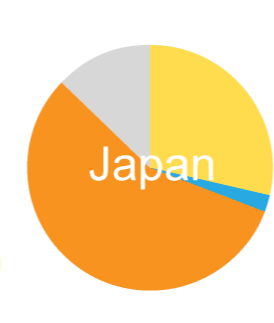 Like Japan, Asian countries such as Vietnam, Thailand, Myanmar and Cambodia tend to have a large share of Buddhism. However, India, the birthplace of Buddhism, is the region with the largest number of Hindus, along with Nepal. On the other hand, Islam is widely believed in Bangladesh and Indonesia among Asia. In China, the influence of the Communist Party, which affirms atheism as a rule, is the greatest in atheism. 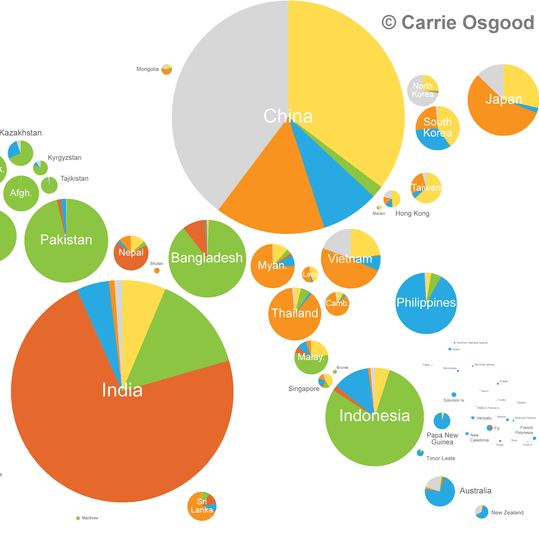 In North and South America, Christians make up the majority of the population.

European countries and Russia are also areas with many Christians. In addition, Europe is characterized by having more atheists or agnosticists than Christians, and in particular, it occupies a quarter of the whole in Germany. However, this map is based on the statistical data of 2010, and since the issue of immigration and refugees intensifying in recent years is not so big yet, the percentage of Muslims is much smaller than the situation in 2019 It is necessary to pay attention to the point.

In the Middle East and northern Africa, Islam is dominant. On the same African continent, southern countries tend to be dominated by Christianity. Also, Israel, which is surrounded by a red frame, is the only country in the world with the most Jews.