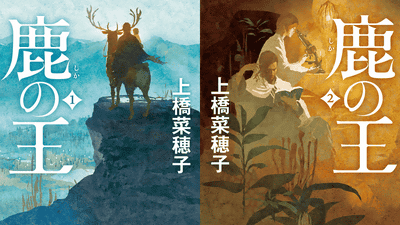 An animation movie has been decided for the novel '

King of Deer ' which won the grand prize at the 12th Bookstore Grand Award and the 4th Japan Medical Novel Award held in 2015. The author is Naoko Uehashi, who is known for his ' Muner ' series. In addition, the publication of the latest edition of the original book, 'The King of the Sea of Water, ' is also decided.

The outline of the work of 'The King of Deer' looks as follows.

Connect your life. Protect your loved ones. A story of a father and a child who confronts an unprecedented crisis.

A warrior group who fights for death in order to protect his homeland, which is enshrined in a powerful empire.
Van, who was his head, was dropped by slaves and was caught in salt mines.
One night, a group of mysterious dogs attack the salt mines and a mysterious disease occurs.
Van who ran away at that chance picks up a little girl.
On the other hand, in the royal reign, which is rumored to be rumored to be affected only by
Doctor Hossar was searching hard for the treatment.

The father and son who survived the infection and the doctor who struggled to save their lives.
The story of the 'pity' of those who confront the tough destiny.

An epic adventure novel that makes for a precise medical suspense.

The animation based on Mr. Uehashi's work is the third work following 'The Spiriter's Guardian' and 'The Beast Player Erin'. Production IG, a producer of animation, is a studio that produces various highly acclaimed works in Japan and abroad, such as 'GHOST IN THE SHELL /' Psycho-Pass 'and' Psycho-Pass 'and' Haikyu !! ' We also created animations for the guardians of 'Beast player Erin'.

Mr. Uehashi and Representative Ishikawa of Production IG have made comments on the animation film.

Original author Naho Kamihashi:
'The king of deer' is a movie.
When I was asked to make a film, the first words were 'Huh? It would be impossible!'
'King of deer' is a rather complicated story, so I thought it would be too difficult to describe in a single film.
However, I was relieved to hear that Production IG made it. If you are Mr. IG, you will not create too much in the original, and you will create an interesting movie as an animation.
You can see the van running across the flying deer in the majestic wilderness!
Now, anyway, it is more fun than anything.

Production IG Representative Ishikawa Mitsuhisa:
When I read 'The King of Deer', I felt that this was a 'Don't Make' work. Actually, I still think.
It was because I felt that it was no longer possible to express the “story of life” in a delicate, deep, magnificent world with images.
However, a human being 'created' appeared. The staff of the staff who gathered based on the idea of expressing 'the king of deer' with animation made me feel crazy beyond imagination.
This is not only the theme of the work, but also the theme of the battle that drew on IG's fortune.

In addition, the original latest publication 'The King of Deer' The Bridge of the Bottom of Water is scheduled to be released on Wednesday, March 27, 2019. The list price is 1600 yen excluding tax.