Shared cups and spoons at work should never be hygienically avoided 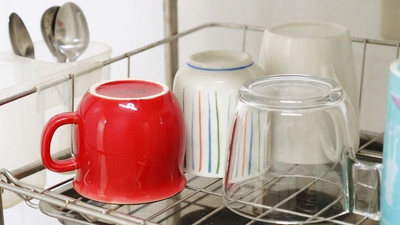 Awareness of epidemic diseases and seasonal influenza has increased socially, and masks of excellent performance have become easily available even at drugstores and convenience stores, so many of the people walking on the mask have worn masks Landscapes are becoming commonplace. However, the risk of infection does not fall sufficiently because of masking, "Quartz overseas media notes that" common dishes such as coffee cups and teaspoons in the workplace can be fully infected " I am urging you.

Can the office kitchen make you sick? - Quartz at Work
https://qz.com/work/1561992/can-the-office-kitchen-make-you-sick/

It is because it is a contact infection route of bacteria and virus that it is considered unsanitary to use cooperative dishes. According to the British National Health Service, S. aureus leading to food poisoning and Clostridium · difficile causing enteritis can survive for several weeks on a hard surface.

Especially, Norovirus, whose epidemic is a topic on a regular basis, does not lose its infectivity for 4 weeks if it is at room temperature even in a dry condition. Symptoms include fever, headache, chills, dehydration may be caused by vomiting and diarrhea. Norovirus is a virus that is often named as a causative microorganism of food poisoning, but not only by putting contaminated food directly into the mouth, even by just handling dishes with a hand that touched contaminated foods infection has expanded sufficiently I will. In addition, influenza is highly infectious compared to other viruses, it causes high fever and chills, joint pain, muscle pain, and when infants and elderly people suffer from it, high fever causes neuropathy and disturbance of consciousness There is also the possibility of causing.

Since influenza virus diffuses through the droplets (mouth) from the mouth and nose of the infected person, it seems that it is unsanitary to cough and sneeze in the office rather than returning the joint mugs without washing . However, influenza virus infects not only droplets but also contacts. According to Quartz, Influenza is infectious only about 15 minutes on the top of the tissue, whereas the infectivity will last for 9 to 24 hours on a dry hard surface such as plastic or metal. Therefore, using shared dishes can lead to infection of influenza.

Although it is possible to sterilize microorganisms on the surface of mugs to a certain extent by washing with soap and hot water, it is said that if you wipe the moisture after washing with the towel, it will be counterproductive. According to a study conducted at the University of Arizona in 1997, it was found that the number of bacteria in the mug wiped with a towel to wipe the dishes after washing was higher than before washing. In addition, towels and sponges placed in the communal kitchen become hotbeds of microorganisms. It is unlikely that the sponges and towels used in the office are frequently cleaned frequently, and in order for the joint mugs to be always sanitary, all the users regularly wash them regularly, including tools There must be. Peter Rose, a microbiologist and professor emeritus of biotechnology at the University of Rhodes, South Africa said, "In cold weather, it's definitely recommended to wash with your own things, avoid using a common mug." I urged attention.