Amazon is making a drama of the novel " Jokes of the Ring " by JRR Tolkien, the original of the movie " Lord of the Rings ". This drama version was produced under the thorough secret principle of "hardly revealing progress and media," and the scriptwriter is writing a full-length script in a secure office of security "The Hollywood Reporter, an overseas entertainment media, reports.

Amazon Reportedly Has Lord of the Rings Writers in a Locked Office With a Guard and Fingerprint Scanner
https://gizmodo.com/amazon-reportedly-has-lord-of-the-rings-writers-in-a-lo-1832744087

It was reported in November 2017 that Amazon acquired the right to drama the "ring story" for 250 million dollars (about 27.5 billion yen), and CEO Jeff Bezos said, "Amazon Prime to Middle-earth I'm tweeting the comment "Go on a journey." The drama version, co-produced by Tolkien Foundation , Amazon's and Tolkien's copyright management, publisher Harper Collins , film company New Line Cinema , cost more than $ 1 billion (about 110 billion yen) in production costs It is said that it can be put on.

On February 15, 2019, a map of Middle-A - the stage for the drama version - was released . When the fans analyzed this map, it turned out that the drama version is more likely to be set as a period of time than the movie "Lord of the Rings".


Three Rings for the Elven-kings under the sky, pic.twitter.com/unJj1Bpde1


Jennifer Salke, president of Amazon Studios, revealed that the drama versions of the screenwriters are writing scripts for all five seasons at the office in Santa Monica , California from a Hollywood reporter. According to Mr. Salke, all office windows are wrapped in tapes, and they are in a closed room where locking by fingerprint scanner has to be released in order to get in and out. In addition, it seems that security guards are watching outside the office, it seems that they are wary of the story's outflow with a considerable precautionary stance.

A paparazzi is inevitable in the production site of high budget movies and dramas where attention also draws attention from the media. Some photographers who want to scoop the surprising guests and storylines faster than anywhere do sneak into the worksite or use drones to do hidden shots. As a result, it is reported that some spots are thoroughly spoiled, and in the popular drama " Game of Thrones " it is reported that an automatic disappearing script or a device to invalidate the drones was used. 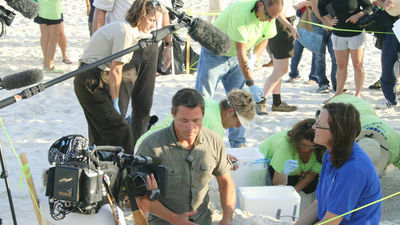 In the agreement on drama conversion rights, there is also an item "must be in production within two years", which is considered to have been surely produced within this year. However, there is also a thorough spoiler countermeasure, and at the time of article creation, it is hardly known how far drama version production has progressed.