I tried using the Bluetooth Speaker 'Syowa Record Speaker', where the record turns and the music flows when the needle is dropped 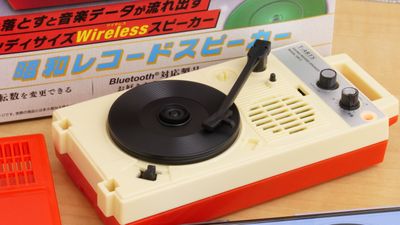 The miniature gadget ' The Showa series ' of the concept 'Let's reproduce Showa retro household appliances using modern technology' will appear from Takara Tomy Arts on Thursday, February 28, 2019. The ' Showa Record Speaker ' that reproduces the atmosphere of the record player in such 'The Showa Series' is that it can play music by the action of dropping the needle on the record even though it is a Bluetooth speaker. I actually used what kind of gadget it is.

The 'Showa Record Speaker' looks like this, with the mirror balls and light particles that appear in the background of the main picture creating a Showa retro atmosphere. 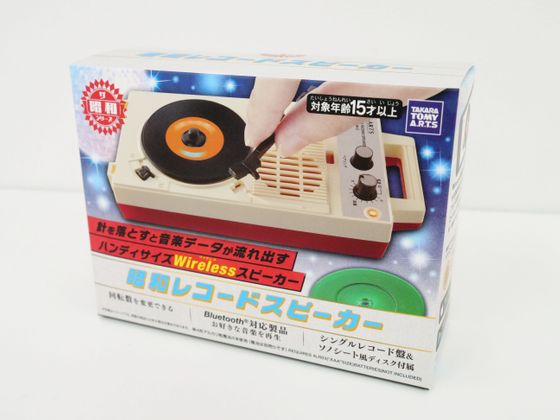 The Showa Record speaker can be used as a speaker if it is connected via Bluetooth, but it can be enjoyed with 'more recording-like manners' by using the dedicated application of iOS or Android. 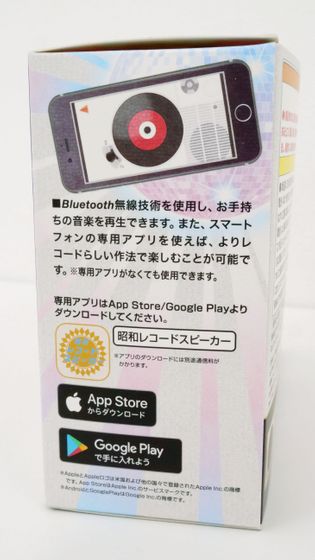 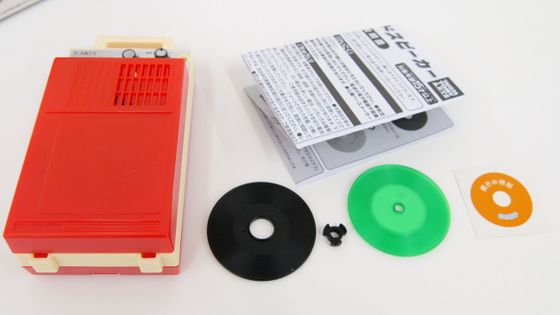 The Showa Record Speaker body was in the package with the lid attached. 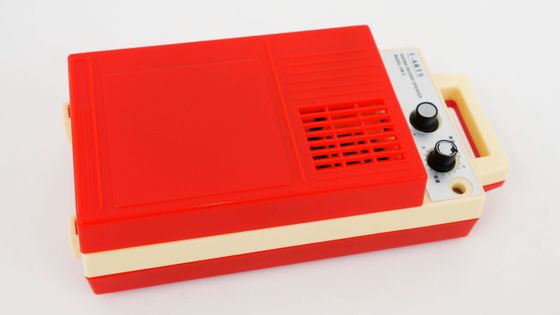 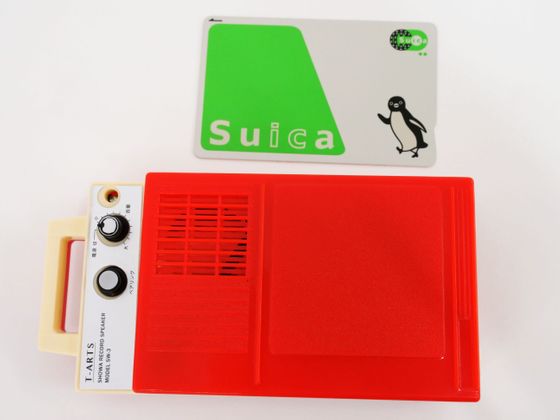 When pushing the projection on the side of the lid and lifting the lid ... 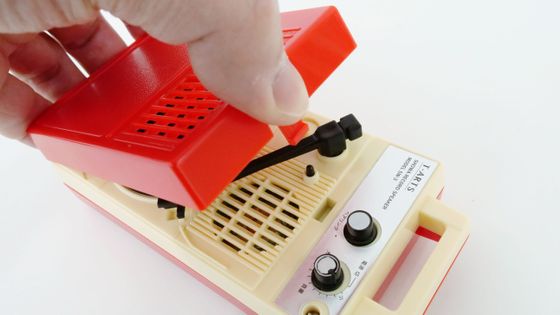 The turntables appeared, and it was just like a record player. 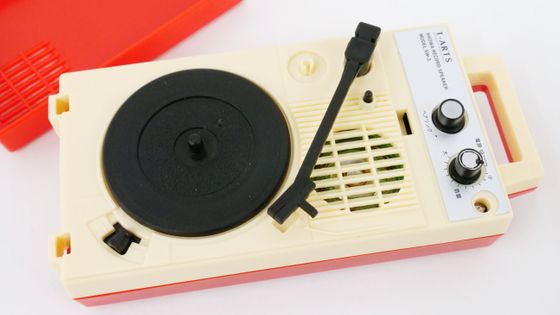 The turntable and tone arm are made of polypropylene. These do not actually pick up the amplitude of the sound groove on the record surface, but are only parts for directing. 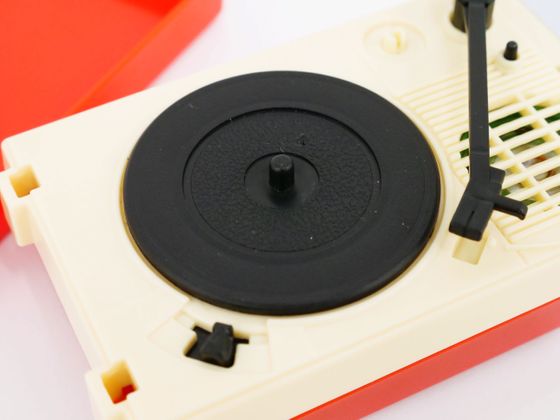 There is also a 'pairing' button and a power / volume dial on the front. The pairing button is a button for pairing connection with a Bluetooth device. 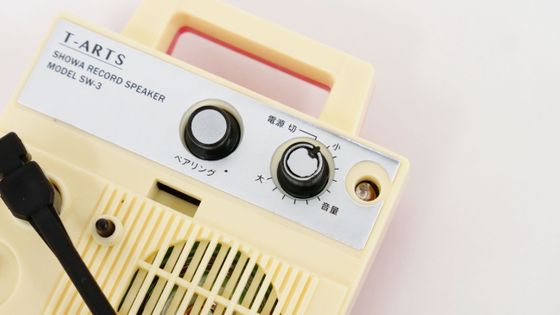 Showa Record Speaker is a gadget that works with 4 AAA batteries. Unscrew the battery cover on the bottom of the body ... 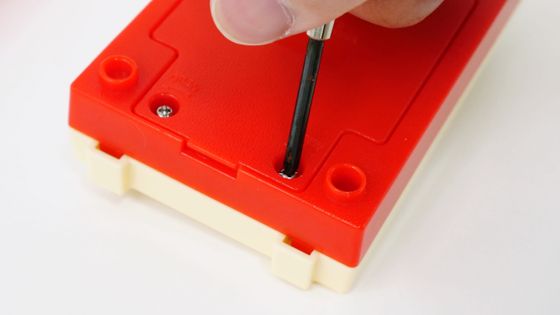 Set the battery while paying attention to the plus or minus direction, and close the battery cover. 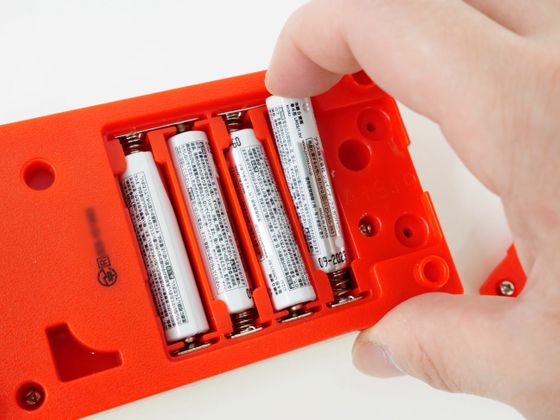 The recording adapter used when loading the included recording disc is a small part that is easy to lose, so place it on the projection on the side of the tone arm. 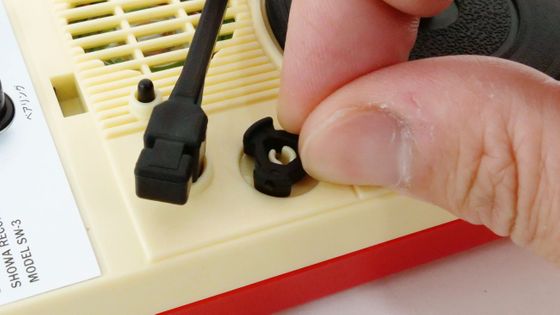 First, connect the Showa Record Speaker to the 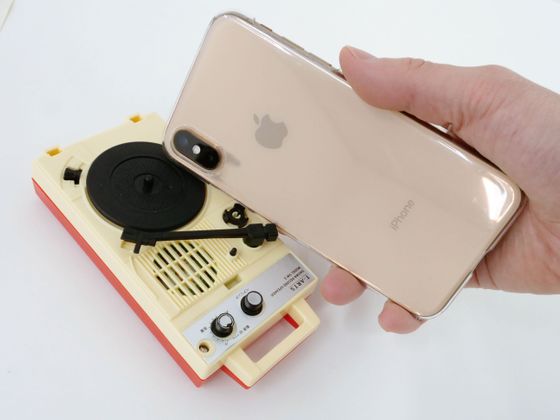 Turn the main unit's power / volume dial clockwise to turn it on. When the power is turned on, the LED lamp will blink slowly. 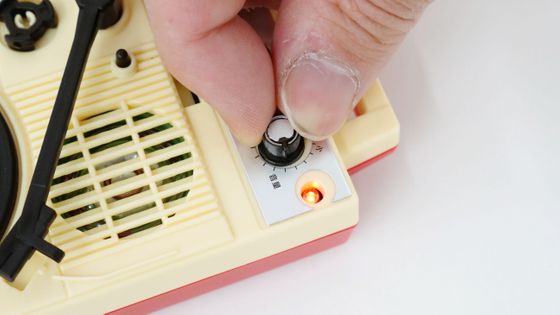 The LED lamp blinks quickly when pressing the pairing button to put the unit in pairing connection waiting status. This completes the preparation for the Showa Record Speaker side. 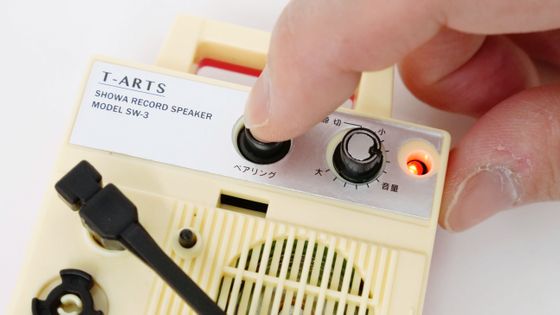 Next, connect to the Showa Record speaker from the iPhone side. Tap 'Bluetooth' from 'Settings'. 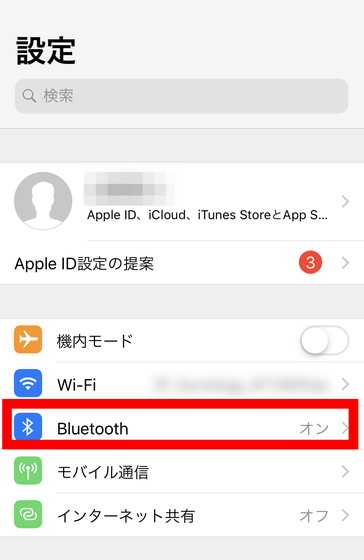 Turn on Bluetooth and select 'BluetoothRecordPlayer'. Then the connection is completed and the LED lamp of the main unit stays on. 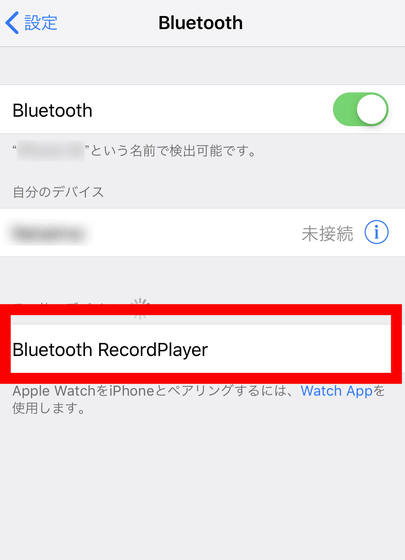 It can be enjoyed with 'more like a record' using the smartphone's dedicated application. As for exclusive application of Showa Record Speaker, iOS version and Android version are released.

It is iOS version to use this time. First of all, tap 'Get'. 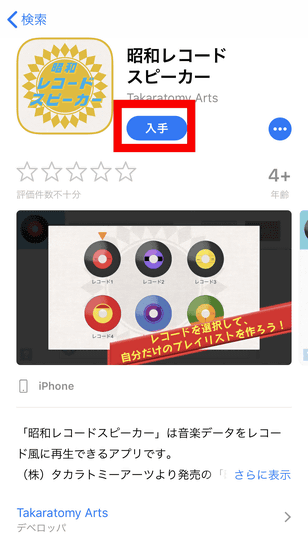 The installation starts automatically when you tap 'Install'. 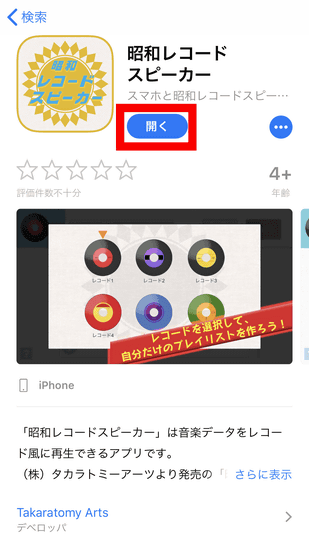 At first, the tutorial starts, so tap 'Next' to read it.

'It is displayed that' Syowa Record Speaker 'is requesting access to Apple Music, music and video history, and media library.' Tap 'OK' to display the Showa Record Speaker application in the terminal. Allows the use of music data.

The home screen of the Showa Record Speaker dedicated app looks like this. Let's add music to the playlist. Tap the plus icon.

Tap to select the song you want to add.

Like this, a song has been added to the playlist. However, you need to be careful because DRM protected files can not be handled by the Showa Record Speaker application.

You can also switch playlists by tapping the top left record icon.

Since we are currently selecting Record 1, we will select a different playlist. We tap record 2 this time.

You can then play another playlist.

So let's actually play music. Showa record speakers come with a single record disc and a

sono sheet, but there is no difference in function. By the way, it is said that the actual sono sheet is a cheap version of the record board and has been used as a magazine appendix. 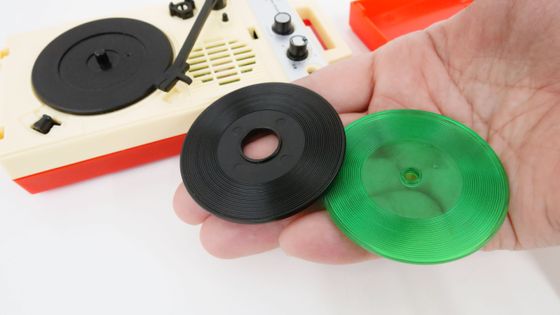 I will try to use a single record this time. Set it on the turntable of the main unit ... 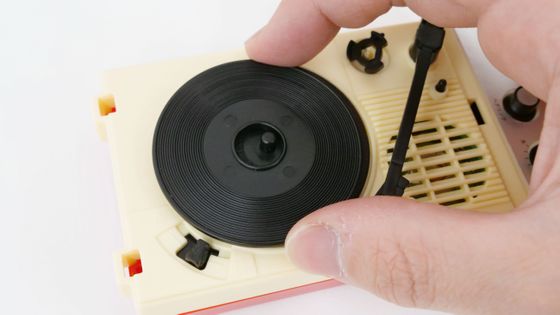 Fit the adapter in the center of the single record disc. There is no need to use an adapter with sonosheets. 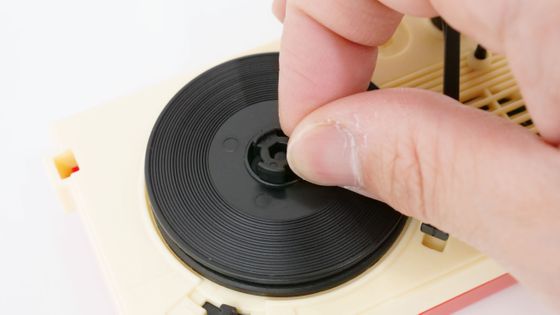 Select the playlist you want to play, and tap 'START'. 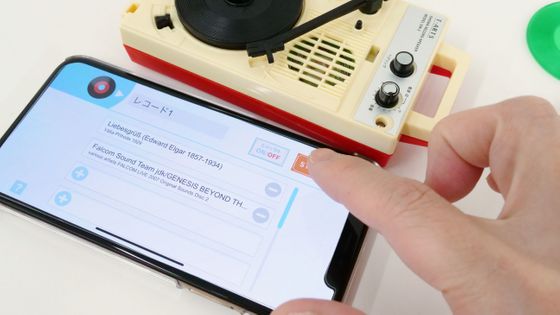 Move the tone arm above the record to play the music. 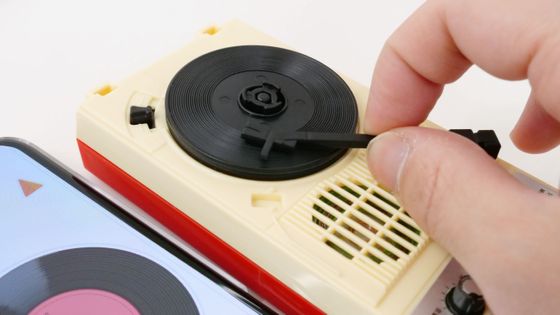 You can see the actual movie playback in the following movie. This time I use the sound source reproduced from the record for the first song in order to taste the atmosphere until the end of my heart.

What happens when you play music with 'Showa Record Speaker'-YouTube


The Showa Record Speaker is equipped with a gimmick that switches the number of rotations of the record with a switch, and a gimmick that a scratch sound is heard when the board is touched on the app. The default number of rotations is 45, and 33 rpm sounds slow tempo. If you scratch the record on the app, the sound 'Good-in' will be played for a few seconds and then it will return to normal playback. The following movie is a picture of how to change the rotation speed and scratch while actually playing music.


When actually playing it, the drive sound of the main unit is quite large. The sound quality itself is not good either, but it may be said that it is a reproduction of the Showa feeling. It looks like a miniature of a record player used in Showa, and can be enjoyed as an interior. The point that it is possible to change the number of rotations and scratch the record on the application is distinctive, and it can be said that it is a gimmick unique to the gadget that imitates a real record player, but 'can scratch the real record' And with the gimmick such as 'playlist is also switched', it is lonely that it may be felt that the feeling of actually handling the record may have become stronger.

The 'Showa Record Speaker' has been sold from February 28, 2019 for a suggested retail price of 4980 yen. At Amazon.co.jp, it was possible to purchase for tax-included 4103 yen. 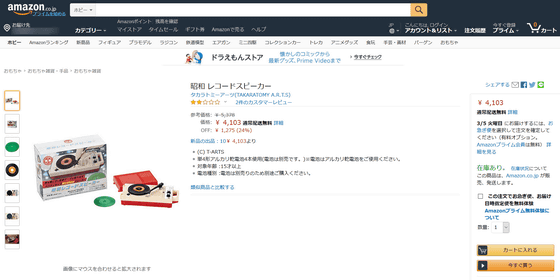 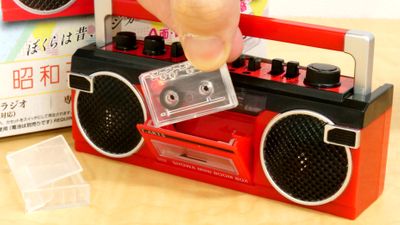 ※ The songs used in this article are based on the 'Falcomm Music Free Declaration', which allows free use and procedure-free and all the music of Japan Falcom with more than 3,400 songs .
GENESIS BEYOND THE BEGINNING / YS ORIGIN SUPER ARRANGE VERSION / Copyright © Nihon Falcom Corporation