What can you do in just two minutes to avoid bad food on your body? 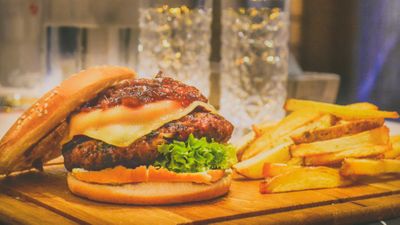 There are many people who understand that "dishes with too much calories or too much sugar are bad for your body" in the head, but you can not stop eating because bad foods taste better than bad foods. Researchers found "simple measures that can be done in just 2 minutes" to refrain such bad foods.

Fighting the crave for fattening food? Just surround yourself in its scent - ScienceDaily
https://www.sciencedaily.com/releases/2019/01/190116111014.htm

The smell of cooking is what you feel before people talk about cuisine, and people smell the smell of how delicious things to eat and what they taste. The research team at the University of South Florida pointed out that the smell itself of cooking acts on the brain's compensation system and thought, "Even without actually eating cooking, people are satisfied only by smelling the smell" .

The research team uses the supermarket and school canteen to change the smell of food such as apples, strawberries, pizza, and cookies carefully to the dining room air, so that what kind of changes will be made to food and cuisine that people purchase It was investigated whether it was. As a result, it turned out that participants who sniffed smells of unhealthy food such as pizza and cookie tended to choose healthier foods ".

For example, if 900 smells apple smell at the cafeteria where lunch is chosen by children, about 37% of the total children choose unhealthy cuisine, which is almost proportional to the proportion of children who choose unhealthy dishes in an odorless condition It was about the same degree. On the other hand, the research team says that the smell of pizza in the cafeteria has reduced the proportion of choosing unhealthy dishes to about 21%. After that, in the laboratory, follow-up research also revealed the fact that the smell of unhealthy food simply does not reduce the desire for unhealthy cuisine. The research team made the participants smell the cookie smell and then let the chefs choose to eat, the participants who smelled the cookie's smell in a short time of "less than 30 seconds" are more unhealthy than healthy dishes He said he was apt to choose cooking. It seems that it turned out that it was necessary for the participants who sniffed the cookie 's smell to keep sniffing for more than 2 minutes in order to select a healthier dish.

Although it has been suggested that smell of food and appetite have been related for a long time, in this research as well, people who are sensitive to smell were more susceptible to the influence of selection of food by smell. The research team says, "The reward system will be satisfied only by sniffing the odor related to unhealthy and delicious food for a long time, and the desire for unhealthy food can be suppressed."

The research team says, "When the reward system is stimulated with a smell of delicious flavor only for a short time, it will be more like choosing a dish that appeals to the reward system thinking that you want more reward, while a long time unhealthy I hear that he has the hypothesis that if you smell the junk food, you get the same satisfaction as if the reward system ate dishes even if you do not actually eat it. " Research team Dipayan Biswas said, "The smell mixed with the surrounding air can be an effective tool to resist people who are unhealthy and tasty," and by using smells children and diet It is possible to improve the eating habits of people who need it.