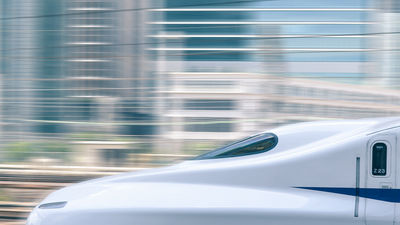 Scientist Watslav Smir, who has been riding the Honda Civic for decades and is traveling by plane with 100,000 miles (160,000 km) per year, "There is no hostility against cars and airplanes, I am preaching the good energy efficiency of railway. However, railway is more efficient than that. Under the assumption that there are many passengers, the necessary energy per person / 1 km is slightly less than 0.1 MJ. Efficiency is not bad even for high-speed railway used for city-to-city movement, 0.35 MJ for Shinkansen, more French TGV with more designs and 0.2 MJ for German ICE , both overwhelmingly lower than airplanes and efficient It shows that.

Also, depending on the location you can move faster than an airplane. For example, TGV connects between 280 km Lyon and Marseille in 100 minutes. The flight time is only 70 minutes between La Guardia airport in New York and New York's Logan airport (300 km), but the train station is in the center of the city, whereas both airports are central Since it is far from the department, it takes about 175 minutes because total travel time is added because it adds the travel time to that point and further check-in time. In fact, in Europe, a high-speed rail network is formed. However, there are several pairs of cities that are likely to be connected by high-speed railway in the United States and Canada, which is lagging behind in this aspect, even the express train " Ambient Express " operated by Amtrak " Aceler Express " It is 110 km and it is not far from high-speed railway. However, as there is a record that the diesel car " Pioneer · Zephyr " which was introduced to the Chicago · Burlington & Quincy Railroad in 1934 has run 1633 km between Denver and Chicago at an average speed of 124 km / hour, You should be able to create a railway network. Mr. Smile concludes with "In 2034, can you see the high-speed railway with an average speed of 300 km connecting Boston and Washington DC, San Francisco and Los Angeles, Toronto and Montreal?"