It is often said that solving a puzzle prevents intellectual deterioration, but in the latest research it was shown that "even if solving a puzzle solving puzzle does not slow the intelligence's declining speed." However, the researchers still say that it is meaningful to solve puzzles. The University of Aberdeen, NHS Grampian and the Irish National University explain the reasons.

Intellectual engagement and cognitive ability in later life (the "use it or lose it" conjecture): longitudinal, prospective study
(PDF file) https://www.bmj.com/content/bmj/363/bmj.k4925.full.pdf 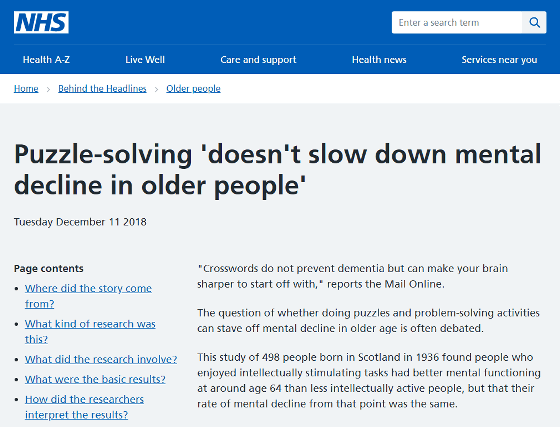 In this cohort study , data on subject's early childhood and data on intelligence tracked from 64 years old to 15 years were used. Researchers collected 498 adults in Scotland around the age of 64 who received intelligence tests at 11 to 12 years in 1947. And at the age of 64, I tested my memory and information processing, and the same test was repeated five times in the next 14 years. By doing this, researchers observed how "intellectual efforts" affect intelligence while taking into consideration the state of education and intelligence in early childhood.

The extent of "intellectual action" was measured by the following four kinds of questions. The point is that I was asked "Whether they are enjoying" rather than "doing" about each thing.

· Reading "Questioning an esoteric novel" "Question to read more than ten books a year"
· Abstract thinking - Asking if you like thinking deeply about things without creating realistic results.
· Problem solving behavior - Question as to whether it is fun to create a new solution against difficult problems
· Intellectual Curiosity - Question as to whether to like to learn new things in a wide range

In addition, in the intelligence test, it was investigated how much you can remember the list of words you read aloud, how much you can associate graphics with numbers, and the speed of language memory and spiritual processing is also examined I say that.

As a result, as a whole, "the higher the intelligence at the time of child tends to make intellectual efforts even after 64 years old", "the women have higher mental processing and higher intellectual action scores than men" It was shown. And naturally the subject's intelligence score has also been shown to have declined with higher age. Of the 498 subjects, 96 people participated in the study until the end, 13 people were discontinued, 57 people died, 332 people declined participation in the study on the way. Under such circumstances, "problem solving behavior" was to be linked with the high score of the intelligence test even considering the academic ability and the state of education as a child. Meanwhile, reading and intellectual curiosity were linked with high scores, but researchers say that they can explain elements such as intelligence and gender as children.

And interestingly, it is said that none of the four "intellectual initiatives" was related to "speed at which intelligence goes down".

On the other hand, those who want to take intelligence tests even if they are older are feeling that "their intelligence is still kept adequately", and those who suffer from dementia tend to drop out on the way Yes. From this, it is possible that this research underestimates the effect of "preventing intelligence decline" of intellectual initiatives. Also, as a problem of observational cohort studies themselves, there is a limitation that one factor can not be concluded to be the cause of another factor. However, long-standing intellectual initiatives and problem solving behaviors are related to the height of intelligence, researchers said that it is not a waste of time to tackle difficult problems.