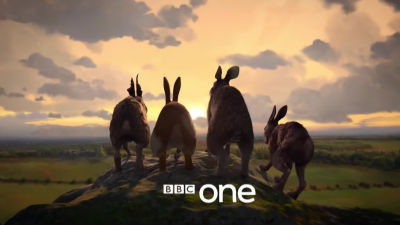 British children's literature masterpieces " watership down rabbits " imaged in 1979 are remodeled by co-production of BBC and Netflix, and they are scheduled to be released according to Christmas. YouTube is publishing a trailer that the rabbit is the hero but a trailer that it is not allegorical but a heroic story content.


In the cave, a rabbit wandering in the dark.

I heard a voice calling "fiber" from somewhere.

At that time I thought the light was visible ......

The eyes of a bunny rabbit opened.

"Having been watching the nightmare again, my brother," Hazle is the older brother of the rabbit fiber.

"I want you to believe in Hazele, but" something "here is going to visit", said the fiber, which has predictive abilities.

"You must leave here immediately, or you will not destroy" that "," says Fiber.

..., but it seems that the words of Fiber are not understood by other rabbits too much.

However, Hazle, Fiber, and fellow rabbits left the village. Go down the river ......

It is likely to get crushed by a car, and it also means scenery.

It also appears who has long claws.

Apart from the existence of humans ......

But before the adventure, the rabbits find the ideal land.

"It's a wonderful place to believe it, you gave us a" home. "

The story does not end here. The battle to protect the found "ideal land" begins.

Rabbits prepared for a raid.

"Do not give up, because you are hoping"

Will rabbits be able to defend the "ideal land" that they reached? So the watership down rabbits are a mini series co-produced by British television station BBC and Netflix. The release date is December 23, 2018 .

The rabbits of the novel's watership down can be purchased at Amazon. Customer reviews are as follows.


It is a story that is located in a deep place of my life after reading for the first time in elementary school.
Because the rabbit is the hero, it is not just a cute fantasy. It can be said that the rabbit, the hero, Hazele, is a biography that spelled his whole life.
Predating animals and human beings to attack, threats of the traps, struggle between rabbits. To survive, run away at full speed. Sometimes, to fight hard to defend your company. A myth of a rabbit hero who talks in a warm hole.
Although the stage is a countryside in the UK, something is different from the human world, the world of rabbit eyes.
However, there are many important things for human beings.
What I am still remembering is that in a village (the village of Cow Slip) where you should not ask "where", the body is also magnificent and elegant, but to few somewhat lonesome villagers, Pipkin It is the word "It seems to be the trees of November". Even though one word or phrase such as phrases and phrases, I think it is really excellent.
Not to children, of course. Not to mention adults, of course. I'd like you to read it.