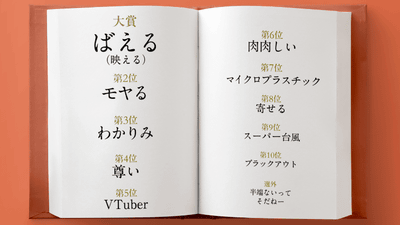 This time, "Presence" was chosen for the grand prize that the presence of " 忖 degrees " chosen as the grand prize in "New Year 2017 of the Year" was too big to do. Although there was already the form of "Instant film" "SNS shine", the part of "shine (bae)" stands for noun "Bae", verb "Bae", and adjective verb "Ba Ya na 0" It penetrated in shape.

"Moyaru" who entered second place is a word expressing negative feelings euphemically. He said that he ranked in the form of synonyms such as "doing misty", "finally doing it" and "watching".

What is important to succeed "eight things to be done by 8 o'clock in the morning"? - GIGAZINE

What if MacDonald makes a promotional video like Apple? - GIGAZINE

Mosquitoes resistant to malaria parasite in genome editing are born, possibility to be decisive for overcoming malaria - GIGAZINE


It is not something to put on a convenience store pic.twitter.com/Ogjdo8n7DC

According to the research group, "This is not the first time that a seal with an eel stuck in his nose is not the first time." "But why the eel got stuck is a mystery"
The eel has a pattern, it seems to be a different kind that is not a Japanese eel https://t.co/eNXW2zqHYP pic.twitter.com/hoOzp6hAHZ


My brother laughs at a toy I have found from storeroom pic.twitter.com/LINw2YMjSV


My daughter photographed around Hirakata City, Osaka Prefecture. What is this? pic.twitter.com/zpsltCs7u4


About 40,000 people gathered in Shibuya on that day. It was a distant investigation that the Metropolitan Police Department named the "crazy · Halloween" that distinguished suspect from among them. The Metropolitan Police Department analyzed videos taken with smartphones and about 250 security cameras. We analyzed each security cameras from the rollover site of the light truck by relay system and chased the suspects photographed in the camera to home.


In the prefectural Konan high school in Kagoshima city, it was learned from the interview with the same school and the city that the skull which was used for drawing in the art class was a female human bone. I can not identify my identity. The city is posting it in the Official Gazette on Friday as "a deceased man who traveled as a line" without a collector, and is requesting information to be provided.


The ruling coalition working team (WT) on the National Defense Program Outline (Defense Outline), which the government revised at the end of the year, announced on Friday that the de facto "aircraft carrier" to rehabilitate the Izumo-type destroyer of the Maritime Self-Defense Force , It was agreed to call it "a versatile operational escort ship". In the future, we will coordinate within the government and the ruling party in a direction to use this designation. According to the constitution, "attacking aircraft carrier" can not possess possession, aims to avoid criticism.


I do not raise prices because "I do not understand" Bank of Japan Vice President: Asahi Shimbun Digital


I tried saying that it was a roll ice shop in Yokohama. pic.twitter.com/QtJIpYEd3l


I got a log of Enoki so I brought it up with a lamp, but a cute enoki came out. Good morning. pic.twitter.com/kvTJ9RJemG


When I upgraded my wife's PC from Windows 7 to Windows 10, it was hard to use it so it was cheated so I decided to use Linux | IIJ Engineers Blog


My wife, who was dissatisfied with Windows 10, said "I can not update it without permission, it works crispy, it is convenient and familiar looking!" The so-called look and feel is important. If you say Linux, you may have an image that you can not use it unless you remember the command, but in recent years desktop it is not such a thing! My wife is also using mouse only.

Work has increased when I made a technical doujinshi and sold it! | Miscellaneous | note

"Molecular gastronomy cuisine" I have been enjoying a great gourmet that has a distinction from existing cooking methods! Continue on the link! pic.twitter.com/NyVhYMukJw


God painter I saw from this is like this! pic.twitter.com/on4hrcA9No


A bug that you can exploit full of many that can escape from that strange light if you fully exploit bug techniques pic.twitter.com/DxPcWdoOTR


On the case that the top image of the British Museum's official Twitter is Ashpa. pic.twitter.com/6kH7u2bUt1


"Oh, I'm sorry, I do not usually open to the public normally - I can touch you if you come at the Harvest Festival in autumn, but you can touch it ... but it's not like that? Because I have collected three emblems, pulled out Well, I do not want to recruit those things right now. That's impossible, is not it. "
I drew pic.twitter.com/z9I6CTQZQu


Image you would like to actively use at Comiket pic.twitter.com/RNxf2x9hfU

I ate the ramen "CURRY noodle" that appeared in the first episode of the animation "Lo Can". https://t.co/6M7hKnlCgS

◆ Sports · Entertainment · Music · Movie (Entertainment)
Kubota and others who bited Emiko Uenuma "I can not criticize ..." and former M-1 finalist | Nikkan SPA!

What J PRIDE: 【The source is not Sanspo】 The decision to enter Hanshin, West decides to transfer to Hanshin


What J PRIDE: 【M-1】 Emiko Uenuma, I was angry hearty after all